By Marshall Auerback, a portfolio strategist and hedge fund manager who writes for New Deal 2.0

Although I have consistently taken the line that QE is totally useless, in effect an accounting trick which does little for real economic activity, I should have at least acknowledged its powers in terms of fomenting casino-like speculation in the financial markets. Mind you, that’s nothing for the Federal Reserve to be proud about, and it is certainly inconsistent with its stated mandate of controlling inflation and promoting employment.

That said, you can lay a lot of the current gyrations in the commodities complex, bonds, equities and currencies at the doorstep of the Federal Reserve. My friend, Michael Hudson of UMKC, has made the same point: “What is to stop U.S. banks and their customers from creating $1 trillion, $10 trillion or even $50 trillion on their computer keyboards to buy up all the bonds and stocks in the world, along with all the land and other assets for sale in the hope of making capital gains and pocketing the arbitrage spreads by debt leveraging at less than 1% interest cost?”

This is the game that is being played today as a consequence of the Fed’s embrace of “QE2”. So when the Financial Times warns of a global food crisis, one can put 2 + 2 together and begin to understand the damage the Fed and its perversely Wall Street centric approach to economic policy is doing to our economy.

In fact, one has to query whether the increasing “financialisation” of the commodities complex has played a significant role. Previous to 2000, pensions could not buy commodities because these are purely speculative bets. There is no return to holding commodities unless their prices rise—indeed, holding them is costly. However, Goldman Sachs promoted investment in commodities as a hedge, on the basis that commodities prices are uncorrelated with equities. This is understandable, given the historic lack of involvement of Wall Street in the commodities complex. Hedging activity was generally restricted to end-users like farmers.

That all began to change in the aftermath of the Commodities Futures Modernization Act of 2000, another legacy of the Clinton/Rubin/Summers regime. Of course, the whole basis of the arguments for commodities as a “defensive hedge” non-correlated to financial asset went out the window the minute this legislation was passed. By definition, when managed money flows into an asset class that had previously been uncorrelated with other assets, that asset will naturally become correlated. Hence, by opening up the commodity complex to Wall Street via this legislation, Congress found another potential bubble for Wall Street. Naturally, this garnered huge profits for the investment banks, but ultimately collapsed along with everything else (leaving your average American poorer in the process as usual).

We saw a recent example of this during the oil price spike of 2008. Recall that the Federal Reserve began to cut rates and flooded the system with liquidity in response to the subprime collapse of 2007. Markets for speculative credits were already under great pressure by late 2007. There were no more returns to be earned from leveraged bull speculation in these markets. It appears that leveraged speculators descended on the smallest of all markets – the commodity markets – because they were small enough to squeeze, corner, and thereby generate with lesser financial resources both bubble action and bubble returns.

In spite of the clear deceleration in the US economy, and the correspondingly sharp deterioration in global economic activity, the falls in the stock market and real estate markets, oil prices almost doubled during the first half of 2008. The financialization of commodities, including the growth of OTC markets, pushed prices well out of line with fundamentals. Finally, after midyear marks were posted by leveraged speculators at the end of June 2008, the commodity markets started down. In percentage terms they fell by more in six months than they had ever fallen in history.

Voters might not understand collateralized debt obligations or credit default swaps, but they do understand the ramifications of paying $4.00 plus per gallon of gasoline. The energy bubble popped in what is known as the great Mike Masters inventory liquidation, as pension funds pulled out of commodities on the fear that Congress was coming after them. They didn’t want all the bad publicity that would be caused if workers knew that it was their own pension funds that were driving up gas prices at the pump.

We have just had some pretty spectacular moves in agricultural commodities. They were triggered by adverse weather events around the world which have resulted in production shortfalls. But are these production shortfalls sufficient to explain the percentage gains in these agricultural commodity prices? Probably not. Microeconomic theory says that commodity prices should be driven by the stock to consumption ratios in these markets as well as the rate of change of these ratios as a function of current and projected surpluses and deficits. This used to be more or less the case before Wall Street got its hands on the commodities complex. 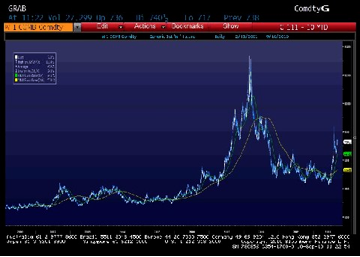 And take a look at this chart:

More recently large global surpluses have resulted in a high global wheat stock to consumption ratio. This stock level might be in fact higher than the historical data suggests because there has been a tendency across all markets for inventory to sales ratios to fall in a secular fashion. So surely several months ago global wheat stocks were on the high side.

As Frank Veneroso has noted in a recent report (“Commodities: Speculation Driven by Expectations of QE Now Dominates” Oct. 8, 2010):

We have now had a weather shock. It has reduced greatly the Russian crop, as well as crops elsewhere. This supply shortfall has thrown the global market into a deficit. However, this deficit is not that large. Based on the latest USDA data and projections the global wheat stock and the wheat stock to consumption ratio will retrace only a small part of their large rises over the prior year.

Long-time commodities trader and portfolio manager Mike Masters discussed this phenomenon with me in a recent email exchange. According to Masters:

Speculation in commodities can be exemplified from the following illustration. Money can be “created” by fiat. Because there is already much more capital available in the world than hard commodities, and also because money can effectively be created in a nearly infinite way; speculators, without limits, and with determination, can increase the price of consumable commodities, like food stuffs or energy, much higher than traditional consumers and producers (hedgers) can react. When derivative markets are linked to real commodity markets, this nearly unlimited capital from the financial sector can cause financially driven excessive price volatility. This is because in the derivative markets, a nearly infinite amount of new commodity derivative contracts can be created to satisfy the demand of financial sector speculators armed with fresh capital. However, because there is only a FINITE amount of bona fide actual hedgers (producers and consumers of the actual commodity), any speculative demand that exceeds the real amount of commodities that can be hedged at that time must be sourced from other speculators. However, these speculators will only supply new contracts via price- i.e. a new speculative demand that exceeds hedger supply must be sourced from new speculative supply at ever higher prices.

I believe that the activity in the soft commodities illustrates that investment and speculative demands still prevail in spite of the horrific crash sustained in this complex in 2008. The casino behavior of the bubble era – actively fomented by the Federal Reserve and accelerating today – still predominates, and investor and speculator attention to underlying fundamentals is disparaged.

This is all about the coming QE via “Helicopter Ben” Bernanke. He and his cohorts in the Fed are actively inciting greater speculative risk and no doubt will attempt to backstop these bets when they go bad. In the meantime, as my colleague Randy Wray has noted,

Wall Street just happens to be marketing commodities futures indexes to satisfy the demand it has created. It also provides a wide array of complex hedging strategies to shift risk onto better fools, as well as credit default ‘insurance’ and buy-back assurances in case anything goes wrong. If all of these “risk management” strategies were completely successful, the pension fund would achieve a risk-free portfolio.

There is growing evidence that the global economy is now slowing, yet commodity prices are rising in tandem with equity prices. Bond prices are rising as well. In the third quarter of 2010, the prices of equities, government bonds and gold all went up – by 11%, 4% and 5% respectively. Such a conjunction of asset returns is a rare event in the financial markets. In the 123 calendar quarters since 1980, there have been just 4 other quarters, each in the 1980s, when all three asset classes have gone up by 4% or more. The rarity of this event is because there are virtually no economic or financial scenarios that favor equities, government bonds and gold at the same time – at least under normal circumstances.
This is all being driven by the expectation of “QE2”. From the Fed’s perspective: mission accomplished. Animal spirits have been re-ignited in the financial markets (would that the Fed could do the same for the real economy, but unfortunately, that’s in the hands of governments which are totally ignorant of the true uses of fiscal policy).

In effect, we are re-establishing another bubble, seeking to restore the status quo ante that prevailed in 2006 when the creation of bubbles was the main driver of economic activity. Typically, these bubbles prevail because our governments repeatedly succumb to political pressure from the conservatives and either don’t expand fiscal policy enough or prematurely abort fiscal expansion. These episodes have repeatedly occurred in history.

The end result is that the onus is left totally on monetary policy, which has over the past quarter century been conducted with a view toward ensuring the well being of Wall Street, than enhancing the productive sectors of our economy. If quantitative easing by the Fed and other global central banks turns out to be dramatic, the desire to hold physical assets may increase – no matter how high their cost of carry and how weak the global economy may become. Commodity prices will then remain high relative to stock availability, and might go much higher.

But the current state of affairs is unlikely to last. On the previous occasions that equities, bonds and gold moved up together, at least one of the assets ultimately proved to be mispriced. At the end of 1980, bond prices declined by 20%, while gold plummeted by 40%. In 1983, bond prices fell 10%. Serious collateral damage can occur in the real economy when the Federal Reserve incites speculative bubbles. So the next time you are wondering what’s happened to all of your discretionary spending power, as you plunge into that pricey breakfast cereal, or ponder your rising grocery bills, you can thank Ben Bernanke and the Federal Reserve.