I’m so offended by the latest Obama canard, that the financial crisis of 2007-2008 cost less than 1% of GDP, that I barely know where to begin. Not only does this Administration lie on a routine basis, it doesn’t even bother to tell credible lies. .And this one came directly from the top, not via minions. It’s not that this misrepresentation is earth-shaking, but that it epitomizes why the Obama Administration is well on its way to being an abject failure.

On the Jon Stewart Show (starting roughly at the 1:10 mark on this segment) Obama claims the cost of this crisis will be less than 1% of GDP, versus 2.5% for the savings and loan crisis (hat tip George Washington, sorry, no embed code, you need to go here): 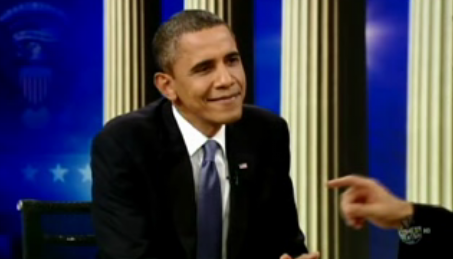 The reason Obama makes such baldfacedly phony statements is twofold: first, his pattern of seeing PR as the preferred solution to all problems, and second, his resulting slavish devotion to smoke and mirrors over sound policy.

The savings & loan crisis led to FDIC takeovers of dud banks and the creation of a resolution authority to dispose of bad assets. That produced costs which were largely funded by the Federal government. I’ve heard economists repeatedly peg the costs at $110 to $120 billion; Wikipedia puts it at about $150 billion. This approach, of cleaning up and resolving banks, has been found repeatedly to be the fastest and least costly way to contend with a financial crisis.

The reason Obama can claim such phony figures is that many of the costs of saving the financial system are hidden, the biggest being the ongoing transfer from savers to banks of negative real interest rates, which is a covert way to rebuild bank equity.

The Obama Administration is also engaging in phony accounting on its expected TARP losses, the latest sleight of hand being magically reducing its expected losses from AIG by $40 billion through a reclassification process. But the biggest source of his false accounting is extend and pretend. The biggest banks are carrying second/junior mortgage portfolios at huge premiums to their real values, which is close to zero. Merely marking the seconds down to something a tad more realistic would easily create $150 billion of losses to Citigroup, JP Morgan, Bank of America, and Wells, in a worst case scenario, much more

$150 billion happens to be over 1% of GDP. And that’s before you get to the writedowns smaller banks need to take. Since the big banks have just under 50% of the total market for seconds, you can double that to $300 billion. Now of course, not all of those losses would necessarily lead to a government rescue, but the odds are high a big percentage would, if not in explicit rescues, then via continued hidden subsidies which ultimately do come out of our collective hide.

Then we get to the fact that regulators are engaging in other forms of regulatory forbearance (finance speak for letting them cook their books), plus asset values are generally artificially high due to near zero policy interest rates. So we have what amount to baked in losses if rates ever get back to something resembling normal levels.

And that’s before we add in the costs of yet another aspect of the financial crisis, the failure to come up with a decent mortgage mod process. If the powers that be had been willing to resolve and restructure the debt of homeowners who could have been saved, ironically, the widespread failing of the mortgage securitization process might never have come to light. But we are now instead having a slow motion train wreck in the biggest asset class in the world, US residential mortgages. Anyone who thinks this isn’t going to result in a real toll on the balance sheets of the biggest banks is unduly optimistic. Banking industry experts Josh Rosner and Chris Whalen each expect another bailout in the not-terribly-distant future. So add more to the ultimate cost of the financial crisis.

But Team Obama is no doubt rationalizing this chicanery: if they can keep from recognizing losses until the recovery takes place, then the ultimate damage will be lower. But Japan’s post bubble record shows that doesn’t work. You simply don’t get a recovery with a diseased financial system. You need to purge the bad assets, only then will meaningful growth resume.

And if you want a better tally of the true costs of the financial crisis, the Bank of England’s Andrew Haldane comes up with much greater damage, precisely because he also considers the costs citizens know all too well, such as painfully high unemployment and drastic state and local government budget cuts. He estimates the cost of the global financial crisis, when you include the biggest item, output losses, at one to five times global GDP. And remember further, because a lot of bad US assets, like mortgage securities and CDOs, were sold overseas, the US did not bear the full costs of the toxic product we created, again undermining Obama’s phony accounting:

But unlike the UK, where regulators like Mervyn King, Haldane, and Adair Turner routinely say things that bear a pretty solid resemblance to the truth, in the US, trying to manipulate appearances in the hope outcomes will follow is the norm. In the 1960s, when the media realized that president Johnson was regularly telling whoppers, the expression “credibility gap” was born. While the press is giving Obama a free pass on his strained relationship with the reality, he is no more likely to succeed in the long run than LBJ did.