The media has been so preoccupied with acute symptoms of the debt crisis – sliding home prices, foreclosure abuses, ongoing Euromarket bank/sovereign debt stress, ongoing battles over financial regulation implementation, unhappiness over the Fed’s QE2 – that lingering problems are not getting the attention they deserve.

High on the list is the how the weak job market is affecting new college and advanced degree program graduates. We have an unspoken social contract: young people who get an education, particularly a “good” education (which means more elite universities, more serious courses of study, graduate degrees) are supposed to be rewarded by higher lifetime earnings. And the prospect of higher lifetime earnings in turn makes it rational to borrow to invest in education.

But this whole premise has started to go awry, and the huge uptick in unemployment has started to make matters worse. A guest post at Baseline Scenario by UMass-Amherst students Mark Paul and Anastasia Wilson outlines the grim conditions facing new graduates:

Currently, even after a slight boost in jobs growth, unemployment for 18-24 year olds stands at 24.7%. For 20-24 year olds, it hovers at 15.2%. These conservative estimates, using the Bureau of Labor Statistics U3 measure, do not reflect the number of marginally attached or discouraged young workers feeling the lag from a nearly moribund job market.

The U3 measure also does not count underemployment, yet with only 50% of B.A. holders able to find jobs requiring such a degree, underemployment rates are a telling index of the squeezing of the 18-30 year old Millennial generation.

Take note: half the recently-minted college grads are in jobs that do not require a college degree.

Now if these graduates were going to college for the mere love of learning, and didn’t mind working at Home Depot because they could work on a novel in their garret, this picture might not be quite as terrible as it looks. But I sincerely doubt that anyone in the US goes to college to become a working class intellectual.

But the economic (as opposed to social and personal) value of higher education is exaggerated. The widely-touted College Board claim that lifetime earnings for college grad outpace those of mere high school grads by $800,000 does not stand up to scrutiny. The author of the 2007 study which the College Board relied upon disclaims that estimate and says $450,000 is a better figure. Mark Schneider, a vice president of the American Institutes for Research, who used actual earnings data of graduates ten years after college, and allowed for other factors such as taxes, pegged the difference at $280,000.

And these estimates are averages. Students who are drawn to fields such as architecture, which require advanced education but are not terribly well paid, will fare less well.

In addition, the value of a degree is premised as much on its scarcity and credentialing value as it is on actual gains in skills. If college educations go from a sign of achievement to a mere social norm, do they really provide that much income benefit to the recipient? James Galbraith, in The Predator State, argued that encouraging more people to get college degrees actually lowered its value, but also served the useful social function of delaying entry into the job market, and hence reducing employment pressures.

But students and their parents have been sold on the value of education as an investment, and it isn’t hard to see why. As higher education costs have skyrocketed, more and more students need to borrow to finance their schooling. The Economist gives an overview:

For decades, college fees have risen faster than Americans’ ability to pay them. Median household income has grown by a factor of 6.5 in the past 40 years, but the cost of attending a state college has increased by a factor of 15 for in-state students and 24 for out-of-state students. The cost of attending a private college has increased by a factor of more than 13 (a year in the Ivy League will set you back $38,000, excluding bed and board). Academic inflation makes most other kinds look modest by comparison. 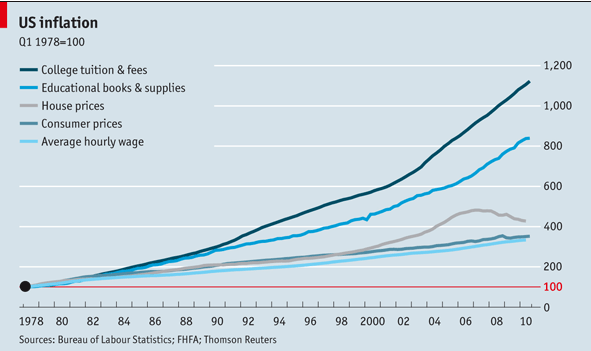 In the stone ages of my youth, many middle class parents could afford to send their kids to Ivy League schools. A year at Harvard, with room and board, is now over $50,000, on a par with median household income.

And perversely, student loans are the only form of consumer debt that is virtually impossible to discharge in bankruptcy. Per FindLaw:

Thanks to a provision the 2005 Bankruptcy Abuse Prevention and Consumer Protection Act signed into law by then President George W. Bush, the current law only allows the discharge of private student loans in bankruptcy after a showing of “undue hardship,” the same requirement that is made for federal or non-profit backed student loans. Undue hardship requires a separate showing to a bankruptcy judge proving, in essence, that the borrower would never be able to pay off the loan. This is an extremely difficult legal standard to meet.

New graduates are, or at least should be, very attractive to employers. Someone who can’t find a good job right out of school will face even higher hurdles down the road. Paul and Wilson describe how high unemployment rates for young people represent a an economic and ultimately a social problem:

Recent college graduates, those in the labor force with the freshest batch of knowledge and skills, are currently underwater and sinking fast with unprecedented student loan and personal debt. Average student debt for the class of 2008 was $23,200, an increase over four years of about 25%, meaning that students are knee deep in negative equity between their educational investment and actual earnings.

Between inflated student debt and the lack of available jobs for qualified graduates, students are defaulting at an all time high level of 7.2%. From 2008 to 2009, student debt defaults jumped about 30% to $50.8 billion. This earning-to-debt gap not only hurts lending institutions, but also may affect students’ future abilities to borrow – a significant hurdle in our credit driven economy.

If student debt and job stagnation continue, younger workers will face real structural unemployment (as opposed to the fake kind that had been suspected by some economists, but was recently debunked by the San Francisco Fed). The more time these young workers spend unemployed and underemployed, the greater chance for future structural unemployment due to deteriorating human capital.

High debt, high defaults, and low family earnings will prevent many students from finishing college at all. High unemployment for those who do manage to graduate with a degree will create barriers for those unable to start their careers.

This is a slow motion train wreck. Optimistic estimates of economic recovery project unemployment reverting to pre-bust norms by 2015; more realistic forecasts put it at years later. And the more students drop out of college, the worse job market pressures become.

At the end of their piece, Paul and Wilson make a persuasive case for action:

In order to solve future structural problems in the United States and ensure a future for the sandwich generation, fiscal policy focused on educational and job growth is crucial. While deficit hawks may squawk about the costs, the burden of repayment is on younger people. Without adequate education and careers for students, we will never be able to balance the budget. In the long run, it makes more fiscal sense to create jobs and collect tax revenue than to rely on a model that merely waits for the private sector to invest.

But the “long run” and “fiscal sense” don’t count for much in deficit debates. Sadly, the very real plight of this cohort is certain to be ignored unless they can find a way to make their needs heard.