A solid paper by Cristobal Young and Charles Varner, “Millionaire Migration and State Taxation of Top Incomes” (hat tip Matt) helps debunk the idea that high income individuals will pull up stakes if their taxes go up. The case study is an interesting one: New Jersey’s tax increases on top earners. New Jersey made the biggest increase of all US states, and also has the distinction of having a low income tax state (Connecticut) nearby, meaning that tax-sensitive residents had an option of moving not all that far to escape the increase, which presumably would allow them to maintain family ties. 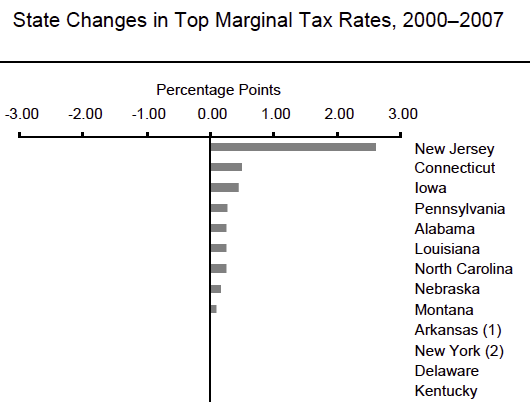 The study results might be labeled “Millionaires are People Too.” Economists and lobbyists love to stress often base their arguments upon economic rationality and contend that everyone is out to maximize his personal bottom line. But moving is a hassle and costly, and most people’s social lives are grounded in their community and their workplace. Relocating is likely to result in a longer commute for those still employed, would cause disruption to any children still in school and would weaken many existing social relationships. The study also provides a survey of the literature, noting findings in Switzerland, for instance, of communities in neighboring cantons with even wider taxation differences and little evidence of tax-driven migration.

This paper examines the migration response to a millionaire tax in New Jersey, which raised the tax rate on top earners by 2.6 percentage points, becoming one of the highest rates in the country. Drawing on complete NJ state tax micro-data, we estimate the migration response of millionaires using a difference-in-difference strategy. The results indicate little responsiveness, with semi-elasticities mostly below 0.1. Tax-induced migration is higher among people of retirement age, people living off investments rather than wages, and potentially those who work (and pay tax) entirely in-state. The tax is estimated to raise $1 billion per year and modestly reduce income inequality.

Now presumably there is a level of tax differentials that might lead more higher income individuals to act. But the very wealthy are already likely to have fairly well developed tax sheltering strategies already at work; the marginal benefit for them of establishing a residence in a tax favored jurisdiction (beyond the methods they already have in place) and spending enough time there for it to be credible may not be great enough for them to change behavior (yes, there are places like Monaco, which has more overtanned middle aged men in nice Italian leather shoes and shapely blonde young women than I recall seeing in combination anywhere else, but the argument is that locales like that are already established and have their residents). The general conclusion of the paper is plausible: that moderate tax increases on the rich, even if no neighboring jurisdictions follow suit, is unlikely to lead to much in the way of emigration and will thus be a net plus in terms of tax receipts.