Cross-posted from The Disciplined Investor

There are several factors that are influencing the markets today. Yes, there is still a great deal of worry about the upcoming “Day of Rage” that will be occurring tomorrow. But beyond this, the media has been making it a point lately to state that the current markets are under pressure due to the high price of crude (now trading at $102)

Yet, with Crude down by more than 2%, why are sellers stepping in (with big volume) and taking down markets?

There are a couple of answers to that question.

1) The underlying unrest in the Middle East is not providing any relief to investors. Investors/Markets hate uncertainty and we are in a period of political unrest and confusion about the outcome.

2) Spain was downgraded last night. Conflicting stories about the health of Spanish banks have been surfacing lately, but with Greece looking worse by the day and now this downgrade, fears about the EuroZone have risen.

3) Initial Claims ticked up. Most analysts have had a pretty rosy outlook for the employment situation in the U.S. and this restatement from last week and the increase this week was a ‘surprise”. 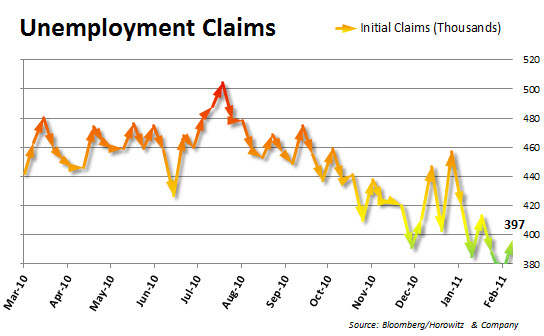 4) One of the economic reports that is really weighing on markets is the Import/Export numbers released last night from China. The drop off in exports is startling. 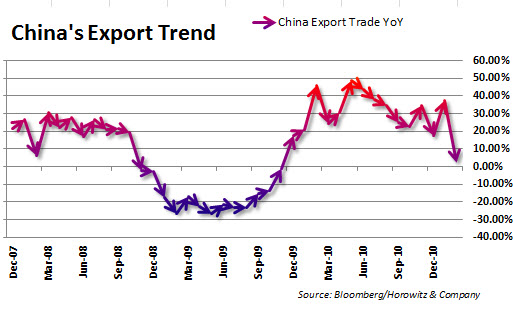 Of course this is what was being pushed by Team Geithner as they were on a non-stop rant about how undervalued the Yuan was. The rising Yuan and the general slowdown of conditions has been the overriding concern as China has been credited as the center of the global recovery. 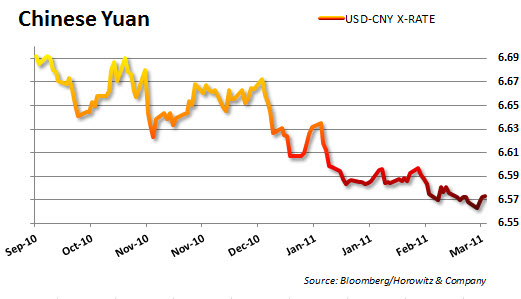 Unfortunately, the rising Yuan was not able to keep pace with what was expected for imports. The slowdown in that measure also created jitters about the sustainability of the Global Recovery. 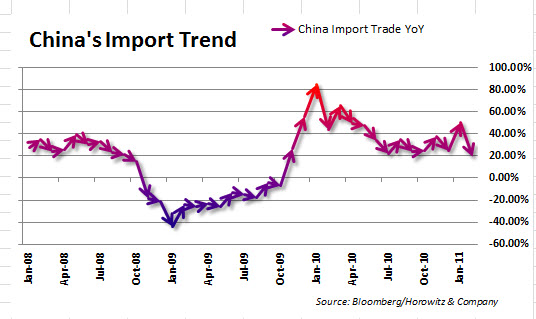 5) Japan’s GDP came in worse than expected. While analysts were looking for a drop of 1.1%, it came in worse at -1.3%. Even though Japan’s Finance Ministers have continues to keep up their rhetoric about coming out of a slump, the proof is in the pudding. Negative GDP is not welcome here…. 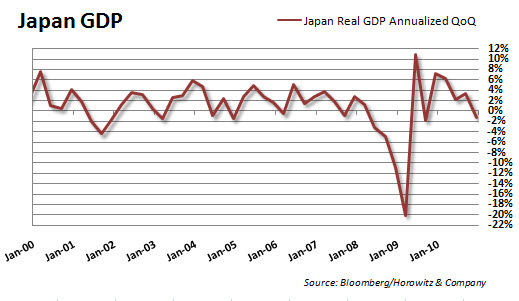 6) Markets are tired. All of the defending of the 1,300 mark on the S&P 500 and the buy-on-the dip is getting long in the tooth. Markets need a breather and the news and conflicts are just what was needed to slow the bullish fever. Still, we know that Bernanke is not going to be letting up on POMO anytime soon, so there is a floor for markets for the time being… (That assumes that Saudi Arabia and the other conflicts in the Middle East do not escalate.)