The further you look at the banking mess, the more the same problems keeps staring back: too many losses, not anywhere enough equity or reserves, and a lot of tap dancing by the officialdom to pretend otherwise.

We wrote yesterday, thanks to some sleuthing by Chris Whalen, that Fannie and Freddie might be sitting on north of $100 billion of unreported losses. If they started realizing those losses, one of the first parties that would take a hit would be the private mortgage insurers, since on high loan to value loans (over 80% of appraised value), they were in the business of guaranteeing the loan balance in excess of 80%. So while the failure of the GSEs to act is no doubt part of the extend and pretend shell game, it serves to keep PMIs that would otherwise be as dead as certain notorious parrots alive.

Adam Levitin points to a second and far more important set of beneficiaries from the GSE’s failure to take action on their defaulted loans: the TBTF banks:

…the GSEs don’t seem to be making claims on PMI policies despite being the loss payees. The reason why is that if the GSEs made claims on the PMIs, it would quickly render all of the PMIs not just insolvent, but illiquid (which is the real kiss of death). And if the PMIs went under, then the GSEs would have to take huge write-downs on all of the still performing loans with PMI insurance. Chris Whalen estiamtes that in order to avoid perhaps $100B plus in write-downs, the GSEs are forgoing several billion in PMI claims. If this is the case, it shows what a farce GSE regulation by FHFA is.

There’s a further twist, however, that Yves post didn’t capture. A lot of PMI is reinsured. And guess who does about half of PMI reinsurance? The captive reinsurance affiliates of the large banks.

While most large banks have reinsurance capitves, the captives of the big 4 banks get about 1/3 of all PMI reinsurance premiums, which probably translates to something like 1/3 of the exposure. Just to list the biggest, that’s Balboa Reinsurance (Countrywide/BoA); Bank of America Reinsurance (BoA); Cross Country Insurance (Chase); North Star Mortgage Guaranty Reinsurance (Wells Fargo). I haven’t figured out the extent of this exposure, as not all PMI is reinsured, and not all reinsurance is first-loss position, but there is definitely some bank group skin on the line with PMI.

What this all means is that if the GSEs are forbearing in making claims on their PMI policies, it not only hides the GSEs’ losses. It also means we’re seeing another quiet bailout of the banks.

Some readers in the last post asked about the level of mortgage insurance. Levitin e-mailed two sets of spreadsheets; this extract provides an overview (click to enlarge): 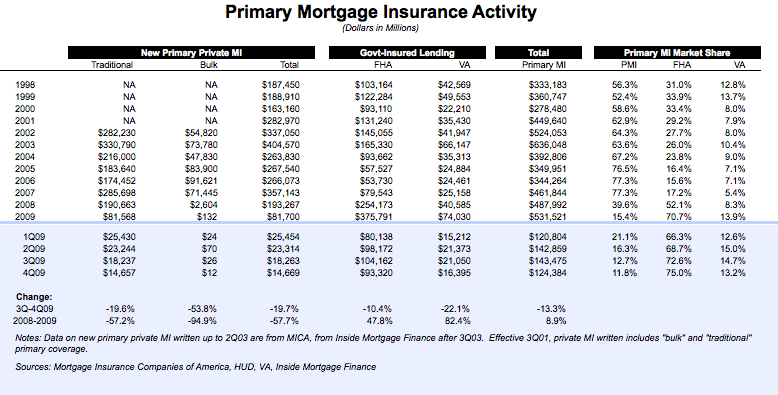 If Fannie and Freddie are not submitting claims, it helps the banks as much, or more, than the mortgage insurers because the captive reinsurers, presumably part of the banks, held about 50% of the premiums received in a trust. The banks would be responsible for any losses beyond the amount held in trust.

The ceding part is a thorny. There appears to be an interesting asymmetry in the economics versus the accounting treatment which also helps to support the extend and pretend game (insurance experts welcome to correct me if I have gotten this wrong, but I think this is at least directionally correct).

An overview of the captive reinsurers comes in a 2011 report by Promontory Financial (boldface ours):

In recent years, excess of loss arrangements were far more common than quota share arrangements. Under a typical arrangement known as a 5-5-25 excess of loss arrangement, the reinsurer receives 25% of the primary insurance premiums, and its obligation to pay is triggered if losses exceed 5% of the primary insurer’s original risk exposure on policies issued in a given year. (The 5% threshold can also be defined with reference to the number of claims filed in a given year.) If this attachment point is met, the reinsurer is responsible for the next 5% of losses. Beyond this detachment point, the reinsurer has no obligation. Beginning in 2008, the GSEs capped the amount of premiums that PMIs could cede under captive reinsurance arrangements to 25% of gross premiums (or gross risk). This move aimed to preserve capital within the primary PMI industry.

Now here is the accounting issue, per Tom Adams:
This author suggests that the banks captive reinsurance entities were not reporting future expected losses due to quirks in the structure – they didn’t have any losses until the primary mortgage insurer’s losses were exhausted:

While all mortgage insurers encounter a mismatch between loss reserves and future paid losses, the gap is much more pronounced for lender captives under aggregate excess of loss structures, which cover a book of loans that originate from a ceding company generally over a one year period….

Because these lender captives don’t participate in a loss until a primary insurer’s retention has been exhausted, lender captives are not required to recognize a loss until the cumulative ground-up paid losses and reserves for delinquencies–the incurred loss–exceeds the aggregate loss attachment point.

The irony here is that the monolines were done in by mark-to-market losses that were reported way ahead of when they’d actually have to pay claims. Those accounting losses put them in a death spiral because they led to downgrades which both increased their funding costs and killed the ratings that were necessary for them to keep writing new businesses. Here we have mortgage insurers who by any commonsense standards are terminal, and captive reinsurers that are in runoff mode even with the GSEs refraining from putting in claims. Yet both are getting an undeserved stay of execution.