It’s time we come up with a new handle for the Office of the Controller of the Currency. It is difficult to convey how shameless this regulatory-agency-turned-slut for the banking industry has become. It’s the Stage 4 disease version of where our government is heading at a rapid clip: officials masquerading as serving the public interest when they are uber lobbyists for the pet whims of their supposed charges.

So what do we call the OCC? The Office of Capital Corruption? The Office of Criminal Capitulation? I have no doubt readers will have even better ideas (and don’t be constrained by the acronym).

As we’ve written in some of our posts on the foreclosuregate settlement negotiations, the OCC has engaged in what even those of us at a remove can tell is bureaucratic warfare against the FDIC and the yet to be operational Consumer Financial Protection Bureau. For the OCC to undermine the CFPB is a twofer. First, it helps to beat back meaningful mortgage reform. Second, the CFPB has the potential to hamper the OCC’s real mission, which is to make sure that the banks come first and everyone else pounds sand. It recognizes the need to make the occasional concession to keep the pitchfork crowd at bay, but otherwise it really has no interest in making the banks toe the line. Note that the Treasury and the Fed have pretty much the same worldview, but the OCC is more shameless and bloodyminded about pursuing it.

For instance, it is pretty clear that someone in the officialdom, probably the OCC, painted a target on Elizabeth Warren’s back. As much as we’e been critical of what appear to be some of the steps she has taken, the flip side is that she does not buy the Team Obama modus operandi of coddling the banks and persuading the chump public to go along via a heavy dose of propaganda and Potemkin reforms.

The CFPB and Warren in particular, have been depicted as behind-the-scenes drivers of the 50 state attorney general settlement talks. Given that the yet-to-be-formed agency wasn’t even in the room during the first round of negotiations, that seems like quite a stretch. It appears that what happened is that Tom Miller, in the two nanoseconds when he was talking tough about mortgage abuses, asked the CFPB for some analytical input as to how to think about what level of fines might be appropriate. It’s not clear whether Miller gave the CFPB some grounds for action (as in “if they didn’t settle, we could sue them for X, Y, and Z” which would then give more concrete parameters for thinking of fines, since the banks would never agree to pay more than what they might lose if the cases went to trial) or gave them free rein to formulate the analysis.

So the goal of that exercise was “What’s the most we could possibly argue for as damages?” or alternatively directly, “What’s a reasonable economic argument for a settlement?” The fact that this analysis came up with bigger numbers than the banksters expected has led the industry defenders to try to turn this finding on its head by depicting these pretty petty fines as monstrously big and therefore proof that Warren is a modern day Savonarola. Ironically, we’ve argued the suggested fines of $20 to $30 billion are way too low if you are coming at this from the perspective of harm done.

So look at how Chief Banking Shill, otherwise know as acting comptroller of the currency John Walsh, insists that the banks can’t be asked to pay for anything remotely resembling the damage they’ve done. This by the way, winds up being the reverse of what any respectable economist wold recommend. For markets to function properly, businesses that do damage are not only supposed to pay for any harm they do to their customers, but also to third parties. That’s why polluters are either regulated, or else subject to extra charges so that the cost of their goods reflects the true social cost. Even conservative economists like Harvard’s Greg Mankiw firmly support this notion.

By contrast, what Walsh is effectively recommending in this Financial Times interview is not only letting polluters get away with doing harm, but also effectively subsidizing them. Of course, his responses are carefully coded, so you need to be alert and read between the lines (view the clip here): 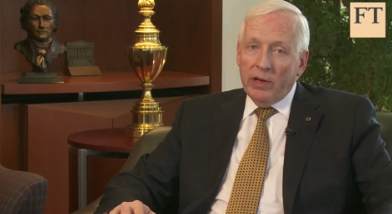 You can see the signs of Walsh’s misdirection and/or complicitness:

The claim that robosigning came to light in September of last year. False, it had been coming up repeatedly in court filings for at least two years before that; the bank regulators chose to ignore it until it erupted into a national scandal.

Characterizing forged documents and false affidavits as “mishandling”. The spin on this gets more and more disconnected from reality. These were systematized, industry-wide practices, not occasional innocent screw ups per the persistent bank Big Lie.

Staunchly supporting the fiction that all foreclosures are warranted, and worse, positive. This is a misrepresentation on two levels. Walsh effectively admits what we’ve long been pretty certain was true: that the touted “Foreclosure Task Force” review of servicer practices last fall was garbage in, garbage out exercise. How did they determine whether the foreclosures were warranted? By looking at ONLY the banks’ records. These same records have produced obvious screw ups like people being foreclosed upon who had no mortgage, plus the more pernicious and from what we can tell, not at all uncommon practice of impermissible application of fees, using suspense accounts to increase fees, holding payments to make them late, using force placed insurance, padding or double dipping (charing the same fee to both investors and the borrower), and applying fees so as to produce fee pyramiding. There are numerous cases where these fees have led to charges that have been larger than the mortgage past due amounts. They can easily escalate to thousands of dollars of unwarranted and illegal charges in a six to eight month time frame.

The second canard here is that borrowers that are behind on their mortgage should lose their house. In every other type of creditor relationship, when the borrower gets in trouble, the first question the lender asks is whether they are worth more to him dead than alive. This isn’t charity, it’s a cold blooded financial assessment. A lender will always restructure a loan if he thinks the borrower can realistically stay current on the new, lower payment amount and it looks more profitable than liquidating the loan.

The reason, as we’ve stressed again and again that banks aren’t modifying mortgages (and remember, the servicers only do the work of restructuring, they don’t eat the cost of the writedown) is the they have terrible incentives. They make money foreclosing and they’ve automated it so it’s profitable to them; they need the proceeds from foreclosures to reimburse themselves for money they’ve advanced to investors; they aren’t set up to do mods, and have no interest in setting up new infrastructure; and if they did enough mods, they’d have to write down second mortgages they own, which they have no intention of doing. So despite the OCC’s claims to the contrary, the parties that have skin in the game, the homeowners and the investors, would benefit from well screened mods, as would the broader housing market. But Walsh is operating from a bogus Mellonite “liquidate the borrowers” logic. The first three years of the Depression tell you how well that idea worked.

There were also several references to bogus notions like “being overly intrusive into their businesses”, overregulation, and the OCC being concerned that regulations or fines might damage bank safety and soundness.

As we have argued, and analyses by the Bank of England director of financial stability Andrew Haldane support, bank crises destroy so much value that you could appropriate all the big banks and it wouldn’t even begin to pay for the damage done. That alone is a justification for extremely intrusive regulation to make them less destructive. Another way to arrive at the same conclusion is to look at the massive level of subsidies the TBTF banks got before, during, and after the crisis. They are not private sector entities, given the massive, one-sided “heads I get huge bonuses, tails I put a drip feed into your national Treasury” arrangement , yet we allow them to launder that into egregious top executive and “producer” pay packages. Walsh’s presentation is completely backwards, and he has to know better.

And as to the idea that the a $20 to $30 billion penalty might hurt the banks, although I questioned the logic of that fine, this document sets out clearly why this no big deal to the banks in question:

But there was a final troubling theme in the Walsh presentation. It sounds as if the CFPB has already capitulated. Notice how Walsh says the agency is assuring people that it’s going to stay in its cage and worry about documentation. That’s better than nothing, but far less than American citizens deserve.