Yves here. Quite a few readers in comments expressed confusion over the announcement of the latest Greek bailout, and some of the details were admittedly a bit murky. This piece will hopefully help clear matters up.

I’ll try to make this as entertaining and easily readable as possible – but first the details of the bail-out agreed on July 21st:

All EFSF loans extended to 15-30 years with interest rate cut to 3.5% (same relief granted for Portugal and Ireland)

First and foremost, let’s call it what it is: a default. Fitch (ratings agency) now rates Greece “restricted default”. This is because some lenders will lose, according to plan, 21% of their “net present value” by exchanging existing debt into new debt (I will not go into detail, since boring and irrelevant).

The debt exchange is “voluntary”. The plan expects 90% participation. What if a bank decides not to participate? 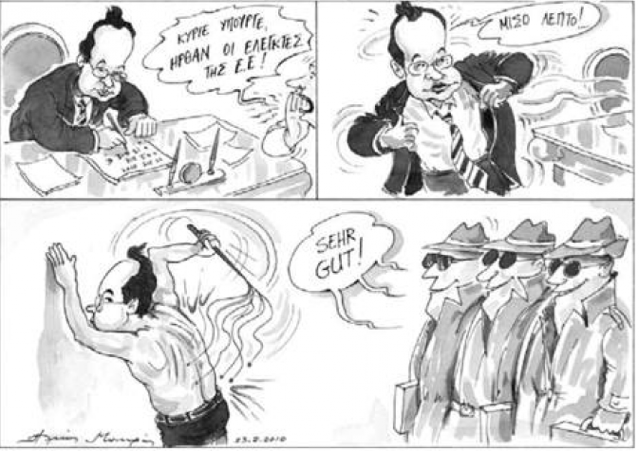 (The Greek Finance Minister is being told the EU inspectors have arrived. He starts to whip himself to the liking of the German-speaking inspectors)

The IMF, in its latest study[1], now sees Greek debt-to-GDP rising to 172% in 2012 (and the IMF is not known to be on the cautious side). Let’s say all the banks participate. The FT estimates the bail-out could reduce Greece’s debt of EUR 350bn by EUR 26.5bn – less than 8%. That would leave debt-to-GDP still north of 150%. Are you kidding me? Not even a year ago the IMF predicted Greece would never exceed 144%. What a joke. While Greece does not benefit materially, banks can exchange their bad holdings for new bonds guaranteed by the European tax payer.

CDS (credit default swaps): ISDA (International Swaps and Derivatives Association) ruled that the Greek debt restructuring is not a “credit event”. Hence, no pay-out on default-insurance. Going forward, this might make it even more difficult to get financing for troubled countries (or companies located in them) if CDS are found not to be an effective insurance.

ECB lost its credibility (if there was any left). Remember when President Trichet (“tricher” in French means “to cheat”) claimed that buying government bonds of troubled countries “was not discussed” only to launch massive purchases the following Monday (May 2010)? After amassing EUR 79bn of Greek, Irish and Portuguese bonds (now all “junk”-rated) and substantial losses Trichet warned the ECB would not accept “defaulted” bonds as collateral for loans (which would bankrupt the Greek banking system within minutes). (This was after earlier promises not to accept “junk” rated bonds). Broken promises over and over again. 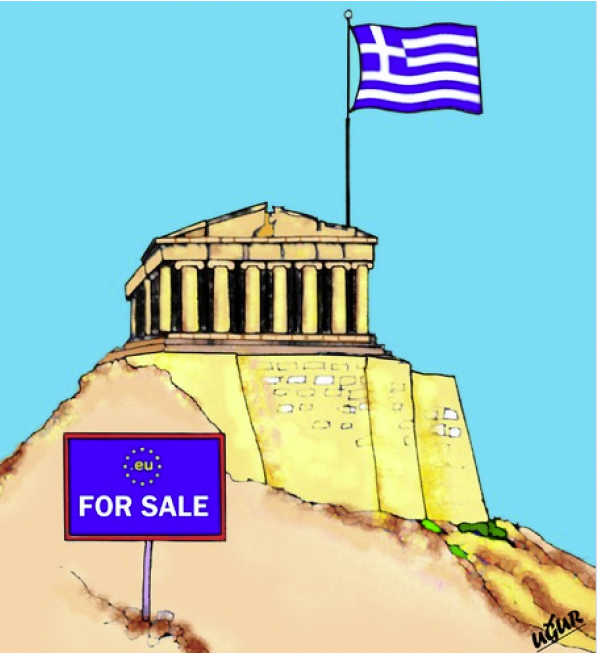 (Greek folks are, rightly, incensed at the idea that EUR 50bn of Greek assets will be sold to reduce the debt burden. Asset sales are ok, but the prices achievable under current conditions will be very low.)

Credibility is the utmost important feature of a central banker. Why? Things only are of value when they are rare. Same with money. Central banks have the monopoly to print money. People trust them to keep its value stable. How can you know? You can’t. You have to trust them. They could change their mind overnight and switch on the printing presses, leaving you holding a lot of worthless paper. Trust comes from credibility. Trichet has destroyed both. The decision to purchase doubtful government bonds in the secondary market was utterly stupid. 1 – it did not benefit the issuer (government) as proceeds went to seller. 2 – ECB ended up with losses on its balance sheet. Participating in a debt-restructuring would realize these losses, making the ECB an opponent of debt restructuring (conflict of interest). 3 – only motivation for intervening in secondary market was to manipulate prices. The ECB got what it asked for. Unfortunately, all this happens at the expense of the tax payer (who might not know it yet). 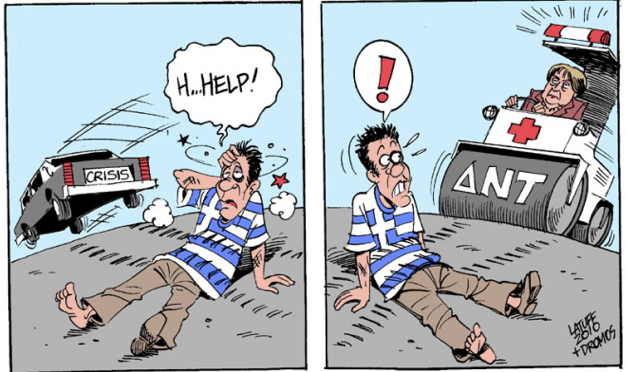 (The letters on the steamroller, driven by Merkel, mean “IMF”)

At least the ECB seems to have given up on manipulating market prices since April (no more bond purchases). Enter the EFSF. They will now do the job.

The EFSF (European Financial Stability Facility) is a Luxembourg-registered private bank. National governments guarantee its debt (but tax payer has no control over it). The current “size” of EUR 440bn has not been increased. But now the EFSF will also have to purchase bonds and recapitalize banks. Banks being riskier than governments (due to leverage) this leads to a decline in asset quality.

The best of it all: the EFSF so far has issued only EUR 13bn in bonds[2]. It does not have 440bn at its disposal. To disburse any funds, it must find buyers for further bond issues. The current AAA-rating is supported by guarantees from its members (governments). The third largest guarantor is Italy (18%), the fourth is Spain (12%). So 30% of guarantees from members that might need bail-outs themselves. Even Greece, Ireland and Portugal are still among the guarantors (7%) of the EFSF – what a joke. But here, governments proudly point to the AAA-rating, thinking that this will let them issue debt without any problems. Until Spain and Italy get into trouble. Which they are. 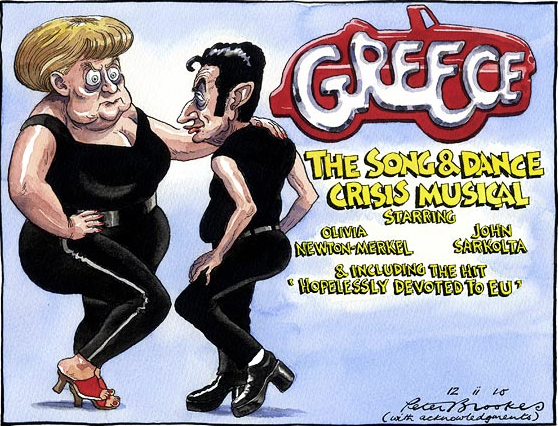 Which brings us to rating agencies: The EU council actually had the impertinence of putting the following in its statement (paragraph 13): “We agree that reliance on external credit ratings […] should be reduced, and look forward to the Commission proposals in this respect.” Now this is absurd. Blaming rating agencies for the crisis? That’s like blaming the insurance assessor for the car accident you had. So let’s get this straight: AAA-rating for EFSF is welcome, but junk-ratings for bankrupt countries not? Because it’s “unfair”? Let’s look at what happened when Fitch downgraded Greece by 3 steps to B+ on May 20 (something that was long overdue). The Greek Finance Ministry let out a statement claiming “the rating cut seemed to be influenced by intense rumors in the press at a time when Greece’s program was being assessed by its lenders”. And now here’s what Fitch had to say: “[…] the issuer [Greece] appealed and provided additional information to Fitch that resulted in a rating action which is different to the original rating committee outcome with respect to the rating.” In plain words: the Greek Finance Ministry didn’t like the rating and used all kinds of threats to make Fitch give a better rating. Now who is influencing whom? The market of course knows this and hence assumes a lower rating than the official one, leading governments to blame “speculators” for their fate.

Paragraph 5 in the EU Council statement points out that the bail-out for Greece is exceptional and a unique situation (don’t ask me why that would be the case). I have no idea why this was included, because it basically signals to markets that other countries cannot hope for same treatment. As the EFSF has not been increased, the more money is being paid out to Greece the less is available for others. Hence any Greek bail-out, by definition, hurts the others. It actually increases risk of a melt-down of the Euro-zone, instead of calming the waters. 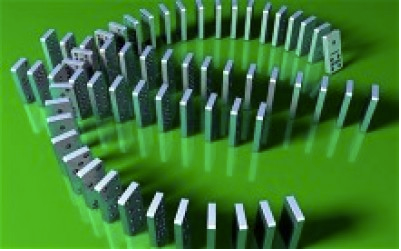 Paragraph 9: Maastricht is back! (“Deficits will be brought below 3% by 2013 the latest”). One has to wonder why Germany and France pushed to weaken the 3%-criteria in the good times. Austerity only helps aggravating the situation in struggling economies (like Italy).

I have difficulties understanding the obsession with not allowing Greece to default (well, this was like a mini-default) and exit the Euro zone. Both will happen anyway, and Greece is a side-show. The main actors are Spain and Italy. Nothing, absolutely nothing has been achieved for them by saving Greece (and some banks). It is akin to someone emptying his fire extinguisher on his backyard grill while smoke starts coming out of the attic of his house.

Comic relief and headline of the year come from Athanasios Orphanides, Governor of the Central Bank of Cyprus: “Orphanides warns the country could need a bail-out after munitions blast” (a military ammunition depot recently blew up).

Finally – what about the success of Greek austerity? Wasn’t the payout of EU/IMF tranches supposedly linked to achieving “milestones” of budgetary improvements? In the first six months of 2011, the budget deficit (EU 12.8bn) overshot the target (10.3bn) by more than 14%. Public spending increased by 9% (due to, surprise, surprise, higher interest rates and payment of arrears to hospitals) while government revenues dropped by 8% (due to the recession).

Conclusion: The umpteenth Greek bail-out was really another bail-out for the banks (and the ECB). Wasting valuable tax payer money on a relatively small problem means there will be no money left when the real “elephant in the room” needs it: Italy.