Continuing this blog’s august tradition of tangling with dodgy Scottish financiers, we turn our attention away from RBS’s ex-CEO, adulterous failed banker Sir Fred Goodwin, (pausing only to note that his wife has at last thrown him out, and high time too), and towards the equally inexplicably Teflon-coated architect of another Caledonian banking trainwreck: former HBOS director, and now youthful pensioner, Peter Cummings.

The meat will be in future posts; first, some background, and then a swipe at the Financial Services Authority, which was the UK’s banking regulator when HBOS was doing its dirty business, and is now muffing the clean-up.

Like RBS, the HBOS collapse is another variation on the endless 2008 theme in which precarious short-term funding models combine with crummy assets to produce a combined liquidity-and-solvency crisis. HBOS was initially “rescued” by way of a government-sponsored shotgun marriage with Lloyds Bank; it soon turned out that HBOS’s funding problems were sufficient to overwhelm its new parent, too. The UK taxpayer stepped in, taking a 43% stake; which isn’t going to be easy to sell on, just yet.

But it got a lot worse. Once the semi-nationalization deal was done, “problem loans” surfaced pretty quickly. Cummings ran HBOS’s Commercial lending division, with execrable results. And deeper down in his division, it went well beyond imprudence, to alleged large scale fraud, as documented in posts at “Naked Capitalism” by Ian Fraser, for instance:

Many of the allegations are from companies that were forced to use the services of Quayside and were then loaned large sums of money, much of which was removed in Quayside fees. From 2007, after fraud allegations surfaced, scores of companies were put into administration. The suspects, which include numerous Quayside consultants, then allegedly expropriated physical assets worth scores of millions and, in administration deals from April 2007, were permitted by the bank to take ownership of many surviving assets.

And where there’s alleged fraud on this scale (the total involved seems to be around £1Bn), any cover up would have to be massive:

Whistleblower Paul Moore, who was ousted as group head of regulatory risk at HBOS in 2005 after he sought to alert its board to self-destructive behaviour in its retail sales arm — plus many of the owners of the 50-plus companies that got sucked into the fraud and were put into administration as part of an alleged cover-up — believes that board-level directors at HBOS including former chairman Lord Stevenson, former chief executive Andy Hornby and former head of corporate Peter Cummings ought to be investigated.

They claim that senior executives at the firm failed to notify the whole HBOS board and the Financial Services Authority (FSA) about the criminal nature of the activities. Senior sources from the impaired assets divisions of other leading banks claim that at their organisations, it would be inconceivable for large numbers of loans worth many millions of pounds to be extended to companies with debt problems without board-level executives being aware.

Moore said: “There are inferences from the evidence of the involvement of senior executives and board members either in the fraud itself or in a conspiracy to pervert the course of justice – in other words in a cover up.”

HBOS senior managers have always denied any knowledge of wrongdoing.

Well, actually. they would, wouldn’t they?

The contrast between the life styles of the perpetrators and the victims is striking, too:

The most sickening thing about the whole sordid debacle is that the alleged perpetrators wre able to buy an fund the running costs of two mega-yachts in the Mediterranean Sea, having siphoned funds out of a state-rescued bank. And secondly, that the decent company directors, whose businesses and indeed lives have been destroyed, or harmed, as a result of the bank’s behaviour, continue to be persecuted, with one couple having been through 22 separate court hearings as the bank seeks to repossess their home, in the apparent hope of silencing them.

To judge by the energy and promptness with which it has pursued its investigations, the FSA, the UK’s financial regulator, is fine with all of this.

In fact, according to the Sunday Times of 24th July, FSA is keen to do a nice little deal with Peter Cummings (who was, incidentally, the director of 149 of the companies to which HBOS lent, many of which were joint ventures between the bank and its favoured clique of property tycoons, though none of these appear to have been beneficiaries of the Reading branch’s largesse). The proposed FSA deal is this: Cummings agrees to a lifetime ban from the securities industry, and the FSA in return drops its investigation into his tenure as director of corporate banking at HBOS. That’s an investigation which could only embarrass the great and good on the HBOS board at the time, and, indeed, would leave the FSA itself struggling to explain the quality of its banking supervision during the period in question. So pretty much a win-win, then: unless you are one of the fraud victims; or believe, quixotically, naively, that such cataclysmically bad oversight (or is it plain malfeasance?) ought to be investigated, and if appropriate, prosecuted.

Unfortunately for the FSA’s cosy proposal, the uncooperative Mr Cummings suspects his assailant is brandishing nothing more threatening than a wet noodle, and has invited the FSA to either produce evidence of wrongdoing, or clear his name.

Irrespective of that, Nikki Turner (one of the fraud victims) was sufficiently incensed by the reported deal proposal to draft an open letter to the Chairman and CEO of the FSA, respectively Lord Turner (former vice-chairman of Merrill Lynch) and Hector Sants (former CEO of Credit Suisse in Europe).

Here are some highlights of the letter:

To avoid prejudicing the existing fraud investigation, which involves more junior HBOS types, this open letter appears with redactions. This must be a first. It is the sort of contorted gambit one adopts when working one’s way around regulatory inertia, British legal protections, libel suits, and police process. All of this has slowed down the delivery of the letter by several weeks, as you see.

Readers in jurisdictions with less cockeyed attitudes to civil liberties and fraud investigations are welcome to chuckle, or sigh. Of course, Thames Valley Police may contact me via yves@nakedcapitalism.com if they feel they need to set me straight on anything.

Before I finally hand over the microphone to Nikki T., please be assured that I’ve seen enough to be happy that the allegations below are well documented: the deeply suspicious dealings of Mr Cummings, the improbable obliviousness of other HBOS board members, and the inertia, prevarication (and connivance?) of the FSA. 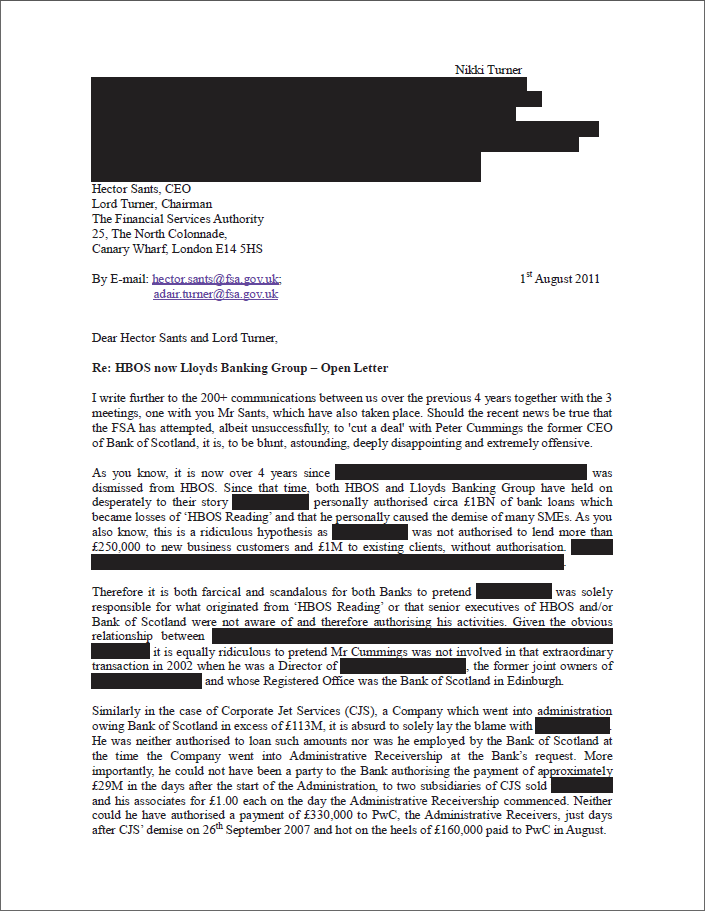 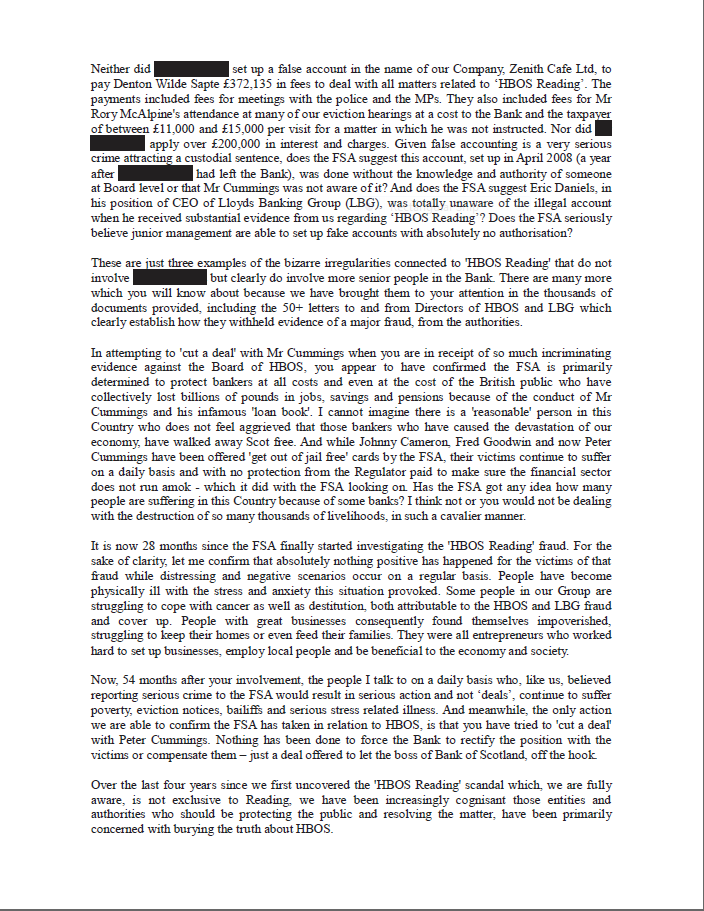 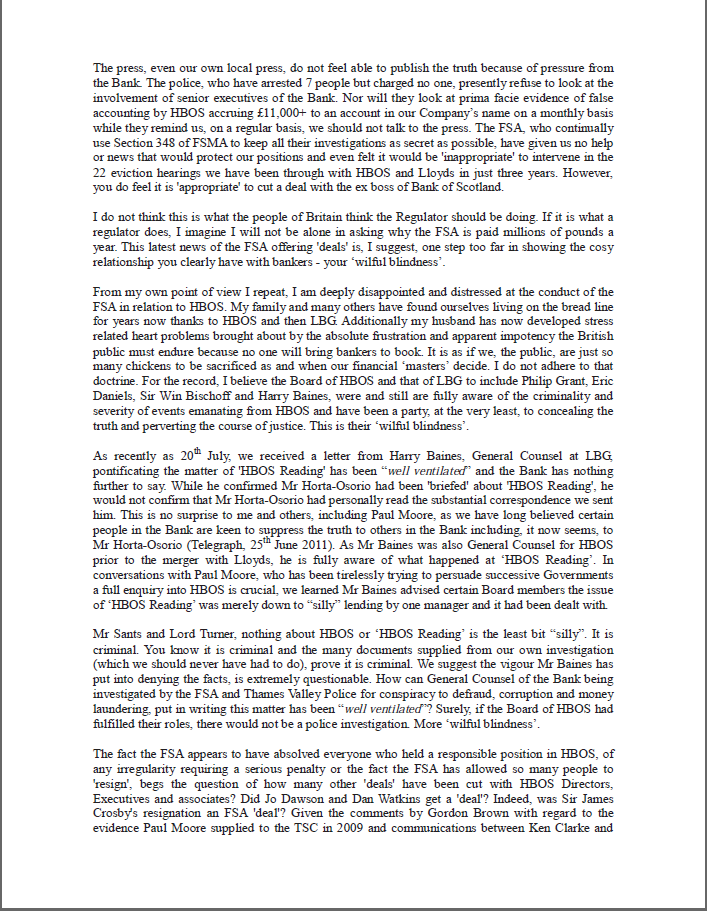 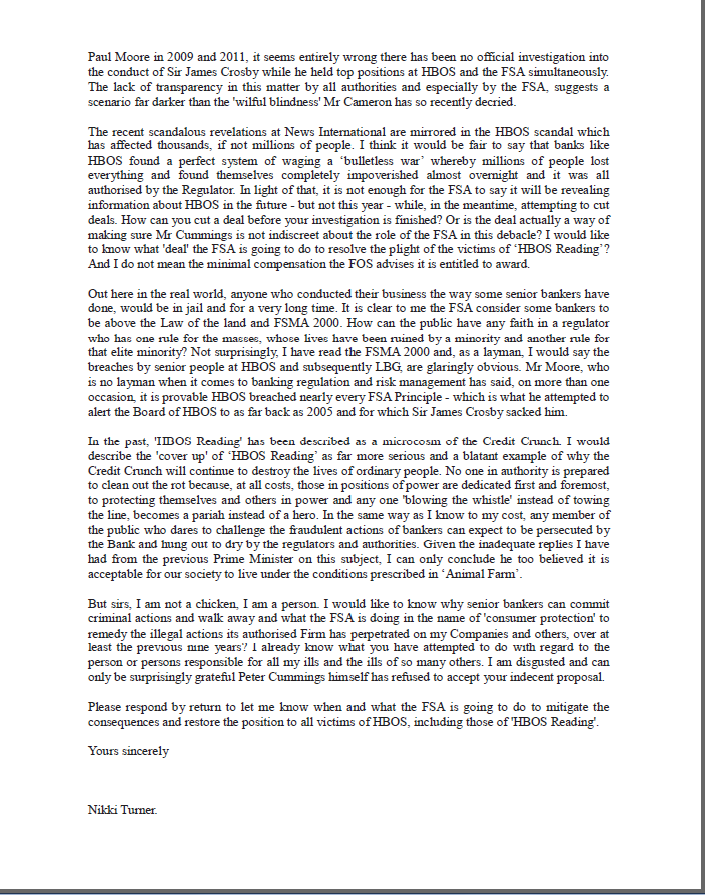