Wow, Jones Day just created a huge mess for its client and banks generally if anyone is alert enough to act on it.

The lawsuit in question is American Home Mortgage Servicing Inc. v Lender Processing Services. It hasn’t gotten all that much attention (unless you are on the LPS deathwatch beat) because to most, it looks like yet another beauty contest between Cinderella’s two ugly sisters.

AHMSI is a servicer (the successor to Option One, and it may also still have some Ameriquest servicing). AHMSI is mad at LPS because LPS was supposed to prepare certain types of documentation AHMSI used in foreclosures. AHMSI authorized the use of certain designated staffers signing with the authority of AHSI (what we call robosinging, since the people signing these documents didn’t have personal knowledge, which is required if any of the documents were affidavits). But it did not authorize the use of surrogate signers, which were (I kid you not) people hired to forge the signatures of robosigners.

The lawsuit rather matter of factly makes a stunning admission (note that PSA here means Professional Services Agreement, and it was the contract between AHSI and LPS, click to enlarge): 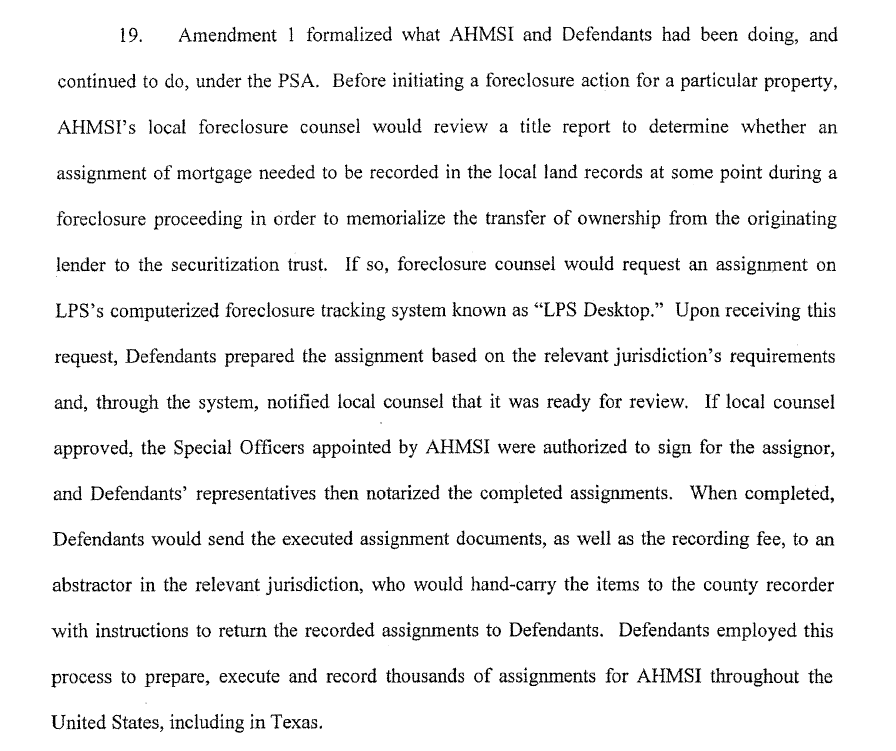 Did you get it? They said that these procedures were standard between the two companies, which was to “..to memorialize the transfer of ownership lender to the securitization trust” right before initiating foreclosure. If you are a regular reader of this blog, you know that is impermissibly late. The note and mortgage had to get to the trust by a clearly specified date, usually 90 days after closing. As we’ve written numerous times, in the overwhelming majority of cases, the securitization entity was a New York trust, and New York trusts are like computer code, they can only operate exactly as stipulated. The exception was trusts by Chase and WaMu, which did allow for the originator to serve as custodian for the trust.

So AHMSI has just admitted that all of its foreclosures done with LPS were completed by the wrong party. In Alabama, wrongful foreclosures are subject to statutory damages of three times the value of the house, and recent cases have awarded much higher multiples of the property’s value. This little paragraph is a litigation goldmine for the right attorneys. I hope they have fun with it.