Study Shows That Austerity Leads to Violence And Instability

A study this month by economists Hans-Joachim Voth and Jacopo Ponticelli shows that – from 1919 to the present – austerity has increased the risk of violence and instability:

Does fiscal consolidation lead to social unrest? From the end of the Weimar Republic in Germany in the 1930s to anti-government demonstrations in Greece in 2010-11, austerity has tended to go hand in hand with politically motivated violence and social instability. In this paper, we assemble cross-country evidence for the period 1919 to the present, and examine the extent to which societies become unstable after budget cuts. The results show a clear positive correlation between fiscal retrenchment and instability. We test if the relationship simply reflects economic downturns, and conclude that this is not the key factor. We also analyse interactions with various economic and political variables. While autocracies and democracies show a broadly similar responses to budget cuts, countries with more constraints on the executive are less likely to see unrest as a result of austerity measures.

Studying instances of austerity and unrest in Europe between 1919 to 2009, Ponticelli and Voth conclude that there is a “clear link between the magnitude of expenditure cutbacks and increases in social unrest. With every additional percentage point of GDP in spending cuts, the risk of unrest increases.”

“Expenditure cuts carry a significant risk of increasing the frequency of riots, anti-government demonstrations, general strikes, political assassinations, and attempts at revolutionary overthrow of the established order. While these are low probability events in normal years, they become much more common as austerity measures are implemented.”

Prominent Institutions, Economists and Politicians Have Warned For Years That Bad Economic Policy Would Lead To Unrest

Many prominent institutions, economists and politicians have been warning about this issue.

The relation between austerity and riots is so clear that former IMF chief economist and Noble prize winning economist Joseph Stiglitz coined a phrase to describe what happens after the International Monetary Fund demands austerity in return for loans to indebted countries: “The IMF Riot”.

Harvard economist Kenneth Rogoff, co-author of a best-selling book on financial crises, “This Time It’s Different,” told Forbes today in an exclusive interview, that the high unemployment rate and high levels of debt in the U.S. will sooner or later trigger serious “social unrest from the income disparities in the U.S.”

The Obama administration has “no clue,” he told me what do about this terrible disparity in the economy that is bound to erupt sooner or later, he feels.

“I don’t understand why people don’t wake up to the crisis they are creating,” he said to me just minutes after appearing at a Council on Foreign Relations round-table on “Currency Wars.”

As I warned in February 2009 and again in December of that year:

Numerous high-level officials and experts warn that the economic crisis could lead to unrest world-wide – even in developed countries:

Others warning of crash-induced unrest include:

CNN’s Jack Cafferty notes that a number of voices are saying that – if our economy continues to deteriorate (which it very well might) – we are likely headed for violence, and civil unrest is a growing certainty.

Watch the must-see CNN viewer comments on this issue:

Newsweek wrote in May:

Reality is beginning to break through. Gas and grocery prices are on the rise, home values are down, and vast majorities think the country is on the wrong track. The result is sadness and frustration, but also an inchoate rage more profound than the sign-waving political fury documented during the elections last fall.

In search of the earthly toll of this outrage, NEWSWEEK conducted a poll of 600 people, finding vastly more unquiet minds than not. Three out of four people believe the economy is stagnant or getting worse. One in three is uneasy about getting married, starting a family, or being able to buy a home. Most say their relationships have been damaged by economic woes or, perhaps more accurately, the dread and nervousness that accompany them.

Could these emotions escalate into revolt?

As the Newsweek article points out, people are furious that the Wall Street fatcats have gotten even richer, while Americans are suffering rampant unemployment:

Corporate earnings have soared to an all-time high. Wall Street is gaudy and confident again. But the heyday hasn’t come for millions of Americans. Unemployment hovers near 9 percent, and the only jobs that truly abound, according to Labor Department data, come with name tags, hairnets, and funny hats (rather than high wages, great benefits, and long-term security). The American Dream is about having the means to build a better life for the next generation. But as President Obama acknowledged at a town-hall meeting in May, “a lot of folks aren’t feeling that [possibility] anymore.”

If it turns out that [the banks] are hoarding, you’ll have a revolution on your hands. People will be so livid and furious that their tax money is going to line their pockets instead of doing the right thing. There will be hell to pay.

Of course, the big banks are hoarding, and refusing to lend to Main Street. In fact, they admitted back in 2008 that they would. And the same is playing out globally.By way of background, America – like most nations around the world – decided to bail out their big banks instead of taking the necessary steps to stabilize their economies (see this, this and this). As such, they all transferred massive debts (from fraudulent and stupid gambling activities) from the balance sheets of the banks to the balance sheets of the country.

The nations have then run their printing presses nonstop in an effort to inflate their way out of their debt crises, even though that effort is doomed to failure from the get-go, and only helps the wealthy.

Quantitative easing by the Federal Reserve is causing food prices to skyrocket worldwide (and see this, this and this), without doing anything to help anyone but the wealthiest. And every country in the world that can print money – i.e. which is not locked into a multi-country currency agreement like the Euro – has been printing massive quantities of money. See these charts.

And the sense of outrage at the injustice of the rich getting richer while the poor get poorer is also a growing global trend.

Countries worldwide told their people that bailout out the giant banks was necessary to save the economy. But they haven’t delivered, and the “Main Streets” of the world have suffered.

To see what happens when a social contract falls apart, look at the massive rioting in London.

Middle-class incomes are down radically in the U.S. since 2007, as much as 15 percent according to new Internal Revenue Service data. Home equity is still falling. If cherished entitlement programs are also savaged by the politicians who destroyed our life savings, citizens might begin to question whether this whole constitutional democracy thing is worth it.

Strange and ominous political eddies are already emerging. Congressional disapproval is higher than 80 percent. This could turn ugly — as it has before in U.S. history. While we’ve airbrushed the legacy of political violence out of U.S. history, it’s there. Labor conducted gun battles with Pinkerton private military forces in the late 19th century. Strikes often turned deadly in the 1930s. If there are serious defense cuts, the prospect of hundreds of thousands of war-weary former soldiers thrown into a terrible economy is not, shall we say, a recipe for social stability.

British rioters, Israel protesters and people worldwide are lashing out at the runaway inequality and austerity measures.

Unfortunately, that means that the unrest will likely continue …

Indeed, these pictures from Israeli protests on Rothschild Boulevard last week show that people worldwide are getting sick and tired of the wealthiest acting like despotic kings: 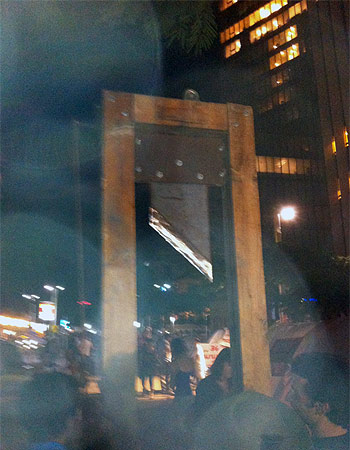 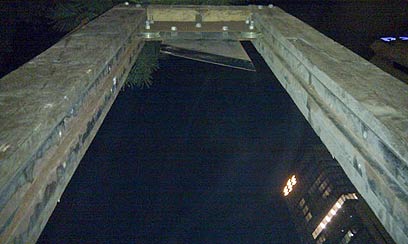 Pictures courtesy of Ynet and Haaretz.