As an old wag put it, “Just because you are paranoid does not mean they are not out to get you.”

Tonight, the Wall Street Journal and the Los Angeles Times both ran stories charging that the revolution in Egypt had lost a great deal of public support. The reason they triggered by BS detector was that both appeared the same evening. If this had been a domestic story, it would be not unreasonable to assume that a seeming coincidence of that sort was the result of a PR push, particularly in the absence of a major news event as a trigger. And as we will see, when I checked the UK media and Aljazeera, the gap in reporting was noteworthy.

Since I lack contacts in Egypt, I’m in no position to verify any of these accounts. Given how often I read dubious accounts in the US media on the beats I know, my suspicion is the UK reports are closer to the truth. I welcome input from informed readers.

Now that isn’t to say there isn’t some underlying truth to the LA Times and Journal stories. The “revolution” (which is an overstatement since the key power broker, the army, is in charge, and some figures from the old regime are still in place, such as the Egyptian ambassador to the US) is less than a year old. Hopes for change have no doubt run well ahead of what could be accomplished, and that is probably made worse by the lack of a leader who could manage expectations. And sadly, disruption to existing social orders often leaves many worse off than they were before.

But the Journal story in particular smacks of biased reporting. It keys off an incident that was treated as minor in the UK press (I read the Guardian, the Independent, and the Telegraph). A rump group of protestors estimated at 200 to 300 continued to occupy Tahrir Square during Ramadan (today was the first day). Local businessmen were not happy with the way the dissidents were interfering with traffic. The army moved in with no warning to clear the square. 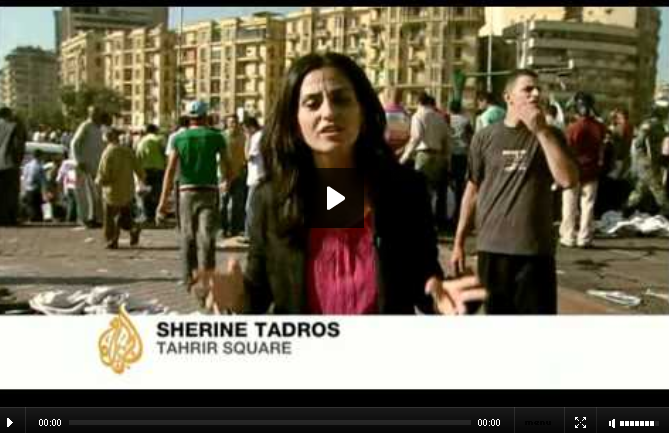 Click to view the segment here. The written report at Aljazeera says most protestors withdrew from the square to honor Ramadan, and it appears the square was cleared, and resulted in some injuries and a few arrests. If this incident had taken place anywhere in Egypt other than Tahrir Square, I doubt it would have gotten coverage from major foreign news outlets.

But you’d never know that reading the Journal. Its headline blares: “Egyptians Turn Against Liberal Protesters“. That is a three-fer: “Egyptians” (meaning the public at large) is against “liberal protestors” (meaning a minority of malcontents, oh, and they are “liberal” as opposed to “pro-democracy”. Never miss a chance to treat “liberal” as a pejorative). This is how the piece starts:

Mobs of ordinary Egyptians joined with soldiers to drive pro-democracy protesters from their encampment in Tahrir Square here Monday, showing how far the uprising’s early heroes have fallen in the eyes of the public.

“Mobs”? And of “ordinary Egyptians”? Look at the Aljazeera footage. You see the square-clearing force consists almost entirely of soldiers. And there weren’t enough people on either side for the label “mob” to be accurate. This is rank yellow journalism.

Six months after young, liberal activists helped lead the popular movement that ousted President Hosni Mubarak, the hard core of these protesters was forcibly dispersed by the troops. Some Egyptians lined the street to applaud the army. Others ganged up on the activists as they retreated from the square that has come to symbolize the Arab Spring.

It isn’t hard to see the effort to mislead. The remaining demonstrators can be called “hard core” but it is mentioned only in passing, further down in the piece, that they were at odds with the majority of the movement. And the UK accounts make clear that there were ordinary citizens unhappy with the continued occupation of the square and participated in the efforts to oust them, but “ganged up” and “retreated” makes both sides sound bigger and more organized than they were.

Yet pundits in the employ of US centrist (meaning center right by world standards) are trying to inject meaning more meaning into this scuffle than appears warranted. Again from the Journal:

“The liberal and leftist groups that were at the forefront of the revolution have lost touch with the Egyptian people,” says Shadi Hamid, director of research at the Brookings Institution’s Doha Center. “These protesters have alienated much of Egypt. For some time they’ve been deceiving themselves by saying that the silent majority is on their side—but all evidence points to the contrary, and Monday’s events confirm that.”

The article does mention an incident that sounds to be a much better barometer of public unhappiness, an attack on a protest in March in Cario that resulted in roughly one hundred people being injured.

But if you connect the dots in the story, the government, which is in the hands of the army, has been making nice to the Islamists. The secular and pro-democracy groups have called for elections, once scheduled for June, to be postponed so they could do a better job of organizing against the better established religious groups. But the delay in elections is (or is perceived to) extend the disruption to the economy.

The Los Angeles Times also takes up the theme that the democracy movement is hurting the economy:

The solidarity around the revolution that toppled President Hosni Mubarak in February is splintering amid deep differences between protesters and millions of struggling Egyptians exasperated by the unrest and its economic consequences. The split reveals how young activists plotting rebellion in cyberspace are disconnected from the anxieties of millworkers and laborers. The nation that inspired the Arab world’s pro-democracy fervor has become a land of bitterness and divided hopes.

So you can read the information in the Journal article and come to a different conclusion than the one that they are pushing: it isn’t necessarily that the public is anti-democracy per se, but that some (all?) of the key pro-democracy groups are engaging in election jockeying to maximize their odds of success in ways that are giving the movement a bad name. The public appeared ready to have elections in June. The demand for delay has allowed the army and Islamists to portray the activists as aligned with international interests that want to undermine Egypt. And they have gone from looking like idealists to looking like power-seeking hacks.

And the Journal also fails to mention that the public displaying some ire only at the pro-democracy types; they are also unhappy with the army. From the Independent in mid-July:

The purge is one of several concessions offered by the caretaker government and the ruling military council in recent weeks. The army is the target of increasing anger, and a general who addressed crowds of demonstrators at Tahrir on Saturday, was heckled and booed. It’s a long way from the scenes of earlier demonstrations, where the chant “The army and the people are one hand”, was regularly heard.

So the public may well be in a “pox on all their houses” mood.

But the Independent’s Robert Fisk argues that the problem wasn’t, contra the Journal, that there was a revolution, but that nothing important changed:

Revolution betrayed. The Egyptian army now colludes with the hated Muslim Brotherhood to bring you – well, a new Egypt that looks much like the old one, cleansed of Mubarak and most (not all) of his henchmen, but with the Army’s corrupt privileges (housing, complexes, banks, etc) safely maintained in return for allowing the bearded ones a share in power. Cut out of the picture: the young and secular revolutionaries who actually fought Mubarak’s security thugs off the streets in order to rid themselves of the 83-year old dictator.

The picture is a grim one – Arab Spring turned into eternal Arab autumn. And the only bread and circuses to give the young Egyptians who demanded dignity in return for their courage will be the sight of the weary, disbelieving old lion in his iron cage at the Cairo convention centre tomorrow….

An ex-dictator gone to seed or a revolution gone to seed? The prospects aren’t good. The youth and secular parties suspect tomorrow will be a one-day “opening” trial and then a postponement of a month or two to give time for the former company chairman to die in his bed back in Sharm el Sheikh. “But we are trying him, just like you asked us to,” the army will say. And they will hold further meetings with the Muslim Brotherhood.

It’s not just that Field Marshal Tantawi, head of the Supreme Military Council and friend of Mubarak, is running the show. Here, for example, is Major-General Mohamed al-Assar, member of the Supreme Council, telling the US Institute of Peace in Washington how jolly mature and co-operative the Brotherhood have become: “Day by day, the Brotherhood are changing and getting on a more moderate track,” he told them. You bet they are. They took over Tahrir Square last week, demanding the new Egyptian constitution be based on sharia. But Tantawi, al-Assar and the rest of the gold-braid brigade will do anything to avoid the real change the original revolutionaries insist upon.

Instead of the destruction of the whole corrupt system, the revolutionaries are going to get “reform from within”, along with the plump, middle-aged beardies whose existence was the very reason why the Americans backed Mubarak in the first place. Later, no doubt, they can be turned into a threat again – once the spirit of Mubarakitism is back in place.

As I indicated at the top of the post, I have no idea where the truth in this matter lies. But the tidiness and similarity of the WSJ and LA Times accounts makes me wonder whether they have been airbrushed to suit other agendas.