On a Federal level, the most prominent front group through which bank-friendly and corporate-friendly smears happen is the Politico, a powerful establishment trade publication that caters primarily to media insiders and politicians, but gets nearly all of its substantial advertising revenue from lobbyists seeking legislative favors. As an example, almost every single print issue from 2009-2010 had a full-page back page ad from Goldman Sachs.

Today’s online advertisers in Politico include AT&T, Altria (ie. Phillip Morris), Boeing, Lockheed, Time Warner, and Verizon, all of whom are putting in money through yet another front group, RATE (Reduce America’s Taxes Equitably).

I’ve been hard on Elizabeth Warren for a lot of reasons, and I still don’t think she should be running for Senate. But if you want to understand how Wall Street exercises its political power, the Massachusetts race will be a great object lesson.

And lo and behold, the six most recent headlines in Politico about Elizabeth Warren are:

Will Warren have much Mass. appeal?

Let’s look at a couple of the recent articles. You’d never know if you read the piece on the 23rd, “Warren faces surprising headwinds” that Warren had gone from being 20 points behind Scott Brown in Massachusetts polls to 2 points ahead. And what is the substance of article? Get this:

The great irony of this is that female candidates actually have fared much better in the South, the most conservative region in the country, than they have in the Bay State.

That’s an interesting factoid, but notice how the headline “surprising headwinds” suggests she is BEHIND, as in she needs to surmount the headwinds to get ahead. Now I’ll confess to having written sensationsationalistic headlines more than occasionally, but this looks an awful lot like a use of the headlines to undermine Warren (remember many readers will merely look at the headline and not read the story proper.

Or let’s look at the one on “TARP panel under scrutiny.” Notice the Congressional Oversight Panel, which Warren led, ended its work in early 2011. The media never paid much attention to the beefs by the Congresscritter from Bank of America, Patrick McHenry (the one who accused Warren of lying about scheduling in the Consumer Financial Protection Bureau hearings) about the level of disclosure by the COP over how it spent its funds (the COP did provide a high level recap, but McHenry wanted granular detail). Even a casual reader of the story can see McHenry’s fingerprints all over it.

This is of course a classic effort Rovian strategy, to undermine Warren on one of her strong points, her reputation for directness and honesty. Unstated is the idea that she insisted on disclosure from Treasury on the TARP while not cooperating with McHenry’s demands.

They glaring problem, of course, is these two cases are not remotely comparable. The Treasury promised transparency right, left and center, and not only failed to live up to its promises, but fell well short of the standards set forth in TARP. And since we’ve gotten inured to big numbers in the wake of the crisis, let us not forget that the TARP had a commitment of $750 billion, while the COP budget was $10.5 million, nearly five orders of magnitude smaller.

In fairness, if the COP has been less forthcoming than similar panels, the Warren critics have a legitimate point. But I have not seen that argument made. Given their eagerness to play up any bit of dirt they can find, I suspect the COP’s amount of disclosure was not out of line with similar efforts.

Despite the rise in Warren’s poll results as a result of favorable press when she launched her campaign, the tone of the press has taken a turn since then. The first story listed above, about Warren’s pay at the TARP, is a real gaffe. A spokesman had initially reported her compensation as $64,289, but that was her 2009 pay, not her total pay. They omitted the $128,433 she received in 2008. Her campaign revised the figure, but the mistake still looks really bad.

One of the big reasons we had cited for Warren NOT running for the Senate was that she already have good access to media, particularly TV, and reporters really liked her. The big advantage of being in the Senate is the ability to use the press for messaging; if you have that in large measure already, the incremental benefit by being in the Senate has to be weighed against the loss of independence (the need to be responsive to voters, donors, and the demands of the party).

But the tone of coverage appears to have taken a turn. These are the latest stories on Warren per Google News (click to enlarge): 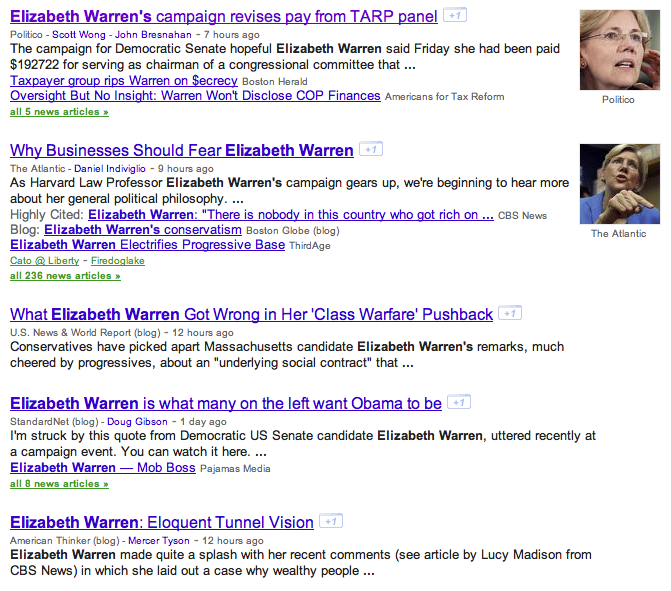 And in case you think I am making overmuch of the change in tone, I got this e-mail from a journalist:

The blowback to her TARP pay issue and her video about the “social contract” is scorching. I’m astonished at the intensity of the rage at her….not just repubs but guys in the media. Or republicans in cahoots with guys in the media? McHenry pushed the story abt TARP….she is going to need some surrogates speaking for her on the stump; she can’t be sailing this ship alone.

Now these are still early days for Warren, but the pounding has already started, and it is not going to get any better. She needs to up her game to prevent some of these charges from sticking.