Readers may recall that we posted on the credibility-straining claim by the former GMAC’s, now Ally’s CEO, that his bank was no longer engaging in robosigining.

Now in fairness, we might have a little clever use of terminology at work. Robosigning narrowly speaking, refers to the use of low paid staffers to execute documents used in court filings by the hundreds per day. This created a huge scandal when it broke because it was a flagrant violation of court procedures. Affidavits, for instance, are used in place of testimony and are required to be based on personal knowledge. A $12 an hour functionary churning out signatures clearly has not even read the paperwork, much the less has any knowledge of the various foreclosures he is pushing through the pipeline.

Ally and other major servicers now piously claim that these systematic abuses of legal procedures that date back to the 1677 Statute of Frauds were mere “sloppiness” or “paperwork errors” and they’ve cleaned up their act. Should we believe them?

While services like #5 Ally may well have dispensed with factory-style signing procedures. there is evidence on the ground that says that the banks have not made meaningful changes. But there is even evidence that robosigning is still taking place, AFTER the banks were supposedly investigated by 11 Federal regulators (we’ve repeatedly expressed our skepticism about that efforts, and our doubts were confirmed by the GAO) and after the servicers entered into consent decrees which made this sort of thing impermissible.

In July, two separate investigations, one by Reuters, one by the Associated Press, found that past robosigners were still cranking out signatures. Reuters identified six robosigners at five different servicers. As we wrote:

So…the banks have perjured themselves, made commitment to regulators that they are brazenly violating. The Reuters investigation determined that at least 5 of the 14 servicers that signed consent decrees in April are not complying with their requirements: OneWest, Bank of America, HSBC, Bank USA, Wells Fargo and GMAC Mortgage. Note that three of them (Bank of America, Wells, and GMAC, now Ally) are among the five biggest servicers, so the impact is greater than the number of derelicts suggests. And one is the annoyingly pious Wells, which keeps maintaining, contrary to all evidence, that it is better than the other servicers. In addition, another six servicers that did not sign the consent orders were also found by the Reuters exam to have engaged in abusive practices.

The AP report found that servicers were continuing to generate documents signed by well-known robosigners, including the notorious Linda Greene. This seems to be asking to be caught out…

Remarkably, the head of the industry lobbying group admits this is happening

Now it’s possible that Ally has since reformed, but that seems highly unlikely. Remember, many of the major servicers halted foreclosures, either in many states or all over the US, and claim that they resumed only after investigating and remedying any problems. Thus Congressional investigations, regulators, investors, and the general public have been told, falsely in some, perhaps most cases, that this fraudulent behavior was a thing of the past.

But it gets even better. The Nevada attorney general, Catherine Cortez Masto, was instumental in getting legislation passed that makes it a crime (a felony) to file improper paperwork with the courts, subject to 10 years in jail and fines of $10,000 per violation. Note that this legislation did not change the legal requirement for foreclosure; it simply criminalized failure to comply.

What happened when the law became effective? Foreclosures stopped. In other words, no one who had been filing foreclosures was confident that their procedures complied with the law. Moreover, Masto says in this segment today on Dylan Ratigan, “There’s no doubt that there’s robosigning occurring”

Visit msnbc.com for breaking news, world news, and news about the economy

Further proof comes courtesy April Charney. Last October, New York implemented a requirement that all attorneys in residential foreclosures certify that they take “reasonable” measures to verify the accuracy of documents submitted to the court. From a formal standpoint, all this did was reaffirm existing law, but procedurally, it makes it much easier for borrower’s counsel to get attorneys who play fast and loose sanctioned.

Look what has happened to foreclosure activity before the requirement was put in place versus this past October: 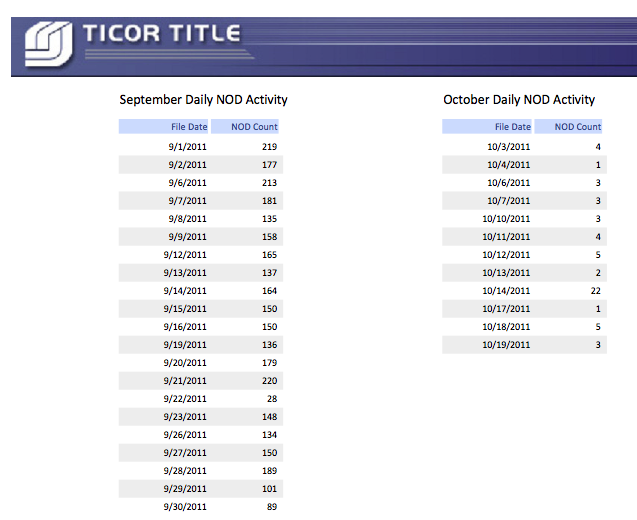 So if you want to believe the sanctimonious claims of the likes of Michael Carpenter, be my guest. But the evidence strongly suggests that he and his peers have and continue to lie brazenly because they have the Federal banking regulators in their pocket.