Yves here. This post from MacroBusiness points to a development that has (predictably) gone largely unreported in America, namely, that life expectancy is declining. The article discusses some of the probable causes and implications. It interestingly omits rising income disparity as a culprit. We quoted Michael Prowse on this topic in early 2007:

Those who would deny a link between health and inequality must first grapple with the following paradox. There is a strong relationship between income and health within countries. In any nation you will find that people on high incomes tend to live longer and have fewer chronic illnesses than people on low incomes.

Yet, if you look for differences between countries, the relationship between income and health largely disintegrates. Rich Americans, for instance, are healthier on average than poor Americans, as measured by life expectancy. But, although the US is a much richer country than, say, Greece, Americans on average have a lower life expectancy than Greeks. More income, it seems, gives you a health advantage with respect to your fellow citizens, but not with respect to people living in other countries….

It was also striking that the author was unaware of how big a role infant and childhood mortality plays in life expectancy. I mentioned my father’s genealogy yesterday. He found that his 18th century ancestors lived on average well into their 80s. It seems that if you made it to, say, 10, you had very good odds back then of living to a ripe old age. Curiously, in the 19th century, the lifespans in his gene pool fell. He didn’t have a theory as to why that took place.

By Cameron Murray, a professional economist with a background in property development, environmental economics research and economic regulation. Cross posted from MacroBusiness

Life expectancy has peaked in some US States according to recent research. This follows research published in 2005 that suggests current living children may not outlive their parents, and that peak life expectancy in the US may be reached between 2030 and 2040. Mostly, this is attributed to the massive spike in childhood obesity which typically results in lifelong obesity and associated health problems.

In coming decades, as obese children carry their elevated risks of death and disease into older age, average life spans could fall by two to five years.

The map below shows areas of the US where life expectancy fell between 1987 and 2007 (in red). At first glance it seems that rural areas are overrepresented in falling life expectancy. There is usually is typically a strong inverse correlation between obesity and income, which would appear consistent, but also one could guess that more automation of rural jobs, and greater propensity of sedentary recreation activities (the internet etc), may be a contributing factor. 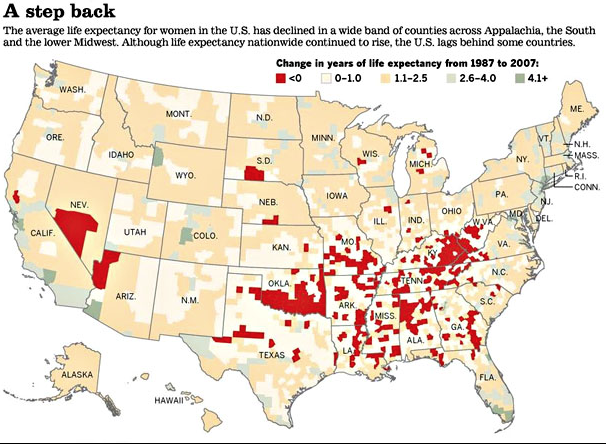 Since then more evidence of decreasing life expectancy is dripping into the debate, especially in the US. One recent study suggests that based on data from 2008, the latest available, life expectancy in the U.S. fell 36.5 days from 2007 to 77.8 years.

But the overall picture still looks very good. The below graph compares the growth in life expectancy in a selection of countries. 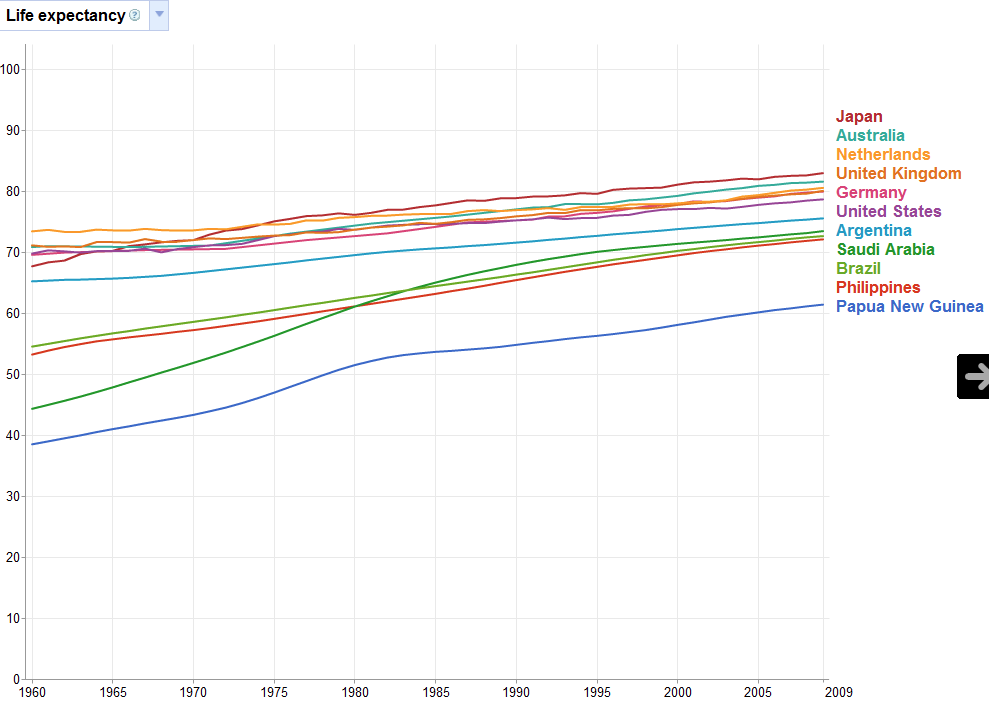 For me, the surprising thing in these data tables is that our life expectancy at birth is rising mostly due to the prevention of death earlier in life, not the extension of old age. If you make it to 85, you have only gained six months of extra life expectancy over the decade – around a quarter of what you gained at birth (one fifth for men).

The other trend of note is that men are catching up to women in the life expectancy at birth. Again, this concurs with the observation that early preventable deaths are being reduced, as risk taking behaviour is disproportionally male.

A couple of questions spring to mind. First, will the rising trend in life expectance continue in the rest of the world? And is it possible that people compensating for improved medical care by being less vigilant about their health or taking more health risks?

When I watch extreme sports I often think that it could be a sign that we as a society have made life so risk-free that people need to compensate by pushing themselves near the limit. I would classify this type of risk as low probability but high impact. Usually, we tightly regulate these types of risks, with seatbelts, helmets, fire alarms and other safety guidelines.

My suspicion is we have removed many high impact low probability risks only to compensated this loss of risk by taking on another type of risk with high probability, but low, or distant, impacts (in addition to the extreme sports variety of compensation).

Poor diet, bad exercise habits, and exempts of this second type of risk. Smoking laws in Australia are probably the stand out example of regulation in this area, but even with all the well intentioned rules, they are the easiest risks to substitute for others. For example, a former smoker might find that chomping down a bit of chocolate is a good substitute for their addictive habit.

As a general trend we might be avoiding high impact risks by unknowingly substituting for low impact risks. Parents need to be especially aware of this. For example, cycling appears to be dangerous because of the need to wear helmets, so parent might be less inclined to encourage cycling. The same goes with sports where there is a perception of high risk, such as rugby or Aussie rules football. Even the most basic of actions such as walking to school is often seen through the high risk lens (due to the low probability of abduction) and a generation used to being dropped at the gate may be less likely to walk later in life, which is a risk itself.

I have no definitive answer to either question. My gut feeling is that medical breakthroughs will stay one step ahead of any compensatory behaviour, and that life expectancy will creep up ever so slowly. I also feel that life expectancies between countries will continue to converge. But I will be on the lookout for more evidence of a peak in life expectancy elsewhere, and should we see this case arising more frequently, I believe that the theory of compensatory behaviour will need serious investigation.