By Wolf Wagner, Professor of Economics, University of Tilburg. Cross posted from VoxEU

As government advisors and central bankers race through the different options to save the euro, this column argues that one such proposal, Eurobonds, will actually increase the risk that several Eurozone countries fail together. It shows using basic arithmetic that these bonds, sometimes labelled ‘stability bonds’, may actually be more likely to harm Eurozone stability.

The debate on Eurobonds has received new stimulus in recent days with the EU commission’s president calling for the introduction of ‘stability bonds’. The adoption of such bonds – or some other form of Eurobonds – looks an increasingly likely outcome as Germany effectively remains the only large country opposing the idea. The defining property of most Eurobond proposals is a joint liability for government debt issued by Eurozone countries. Rather than each member state standing behind its own debt, the idea is that all member states will be jointly guaranteeing the Eurozone debt.

The key rationale behind Eurobonds is that they have the potential to reduce sovereign defaults in the Eurozone. They allow countries that come into troubles to benefit from the strength of other countries. This column argues that while this may indeed reduce the risk of sovereign default in individual countries, the reverse is likely to happen for the risk of a default of a larger number of countries in the Eurozone.

The argument is a simple one, and based on the insight that a pooling of resources increases joint failure risk (see Shaffer 1990). Consider the following setup. There are two countries, A and B. In the absence of joint liability, each country defaults if its government’s funds (or the capacity to raise funds), F, fall below some debt threshold, D. In this simple example, joint failures occur when each individual country is below the threshold, that is, when

The funds are subject to country-specific risk – such as that arising from economic and political factors. This is what creates the rationale for common bonds. A country may still run into fiscal problems – but this is fine as long as the other country has enough room to raise funds to cover the shortfall. Suppose that the countries only issue debt for which they are jointly liable. This obviously completely eliminates the risk of individual failures – countries will either both survive or both default. Joint default will happen when the combined funds of the countries exceed their combined debt

Joint defaults necessarily occur more often than with national bonds – as condition (1) is stricter than condition (2). Intuitively, this is because there are no situations in which the introduction of Eurobonds averts a joint failure. When we have FA <D and FB <D, we necessarily also have that FA + FB <2D. However, there are situations where there is individual default in the absence of Eurobonds but joint default with Eurobonds. This happens if one country is in significant difficulties while the other country is close to default but still manages to avert default (consider, for example, FA =0.8*D and FB =1.1*D). Arguably, this is the situation we are facing in the Eurozone where countries with drastic problems (such as Greece) have the potential to drag down other countries that are in a relatively better shape but still weak in absolute terms (Germany).

The potential for Eurobonds to increase joint defaults is exemplified by the Figure below. In the absence of joint bonds, country A and B default if their funds are individually less than D. Joint failures incur in area A. Under Eurobonds, joint failures occur when F is below the diagonal line, which is given by (2). It can be seen that this creates additional failures in areas B and C. Note that the potential effect is quite large – indeed the area of failures is twice as large previously. 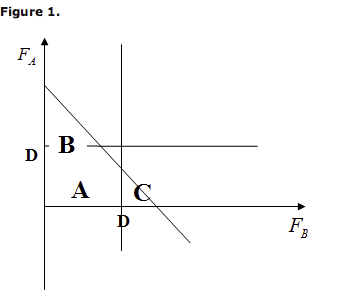 The increase in joint failures triggered by the introduction of common liabilities is a relatively robust property and does not depend on specific assumptions on the risks countries are subject to (see Wagner 2010 for a formal analysis in the context of bank failures).

The result is also robust to the possibility of contagion. An objection to the simple setting considered above is certainly that avoiding failure of an individual country can also mitigate systemic defaults because of the risk of contagion. Suppose, for example, that default of one country makes default of the other country more likely by raising the default threshold to D+C. In such a situation, country B strongly benefits from the survival of country A if country B’s funds are between D and D+C. However, it remains true that pooling increases joint failure risk. This can be appreciated by the fact that then all lines indicating default in the above figure will simply shift from D to D+C – preserving the fact that joint failures become more likely under common liabilities.

The analysis suggests that Eurobonds trade off the failure risk of individual countries with the risk of a joint failure of Eurozone countries. As joint failures are likely to be particularly disruptive, Eurobonds are unlikely to be beneficial for overall Eurozone stability. Note that this argument holds even without taking account of moral hazard concerns – which would further increase the risk of joint failures (in the analysis of above – moral hazard at the country level can be interpreted as an increase in the debt threshold D – which obviously will lead to more failures of whatever sort). Of course the introduction of Eurobonds may have other objectives than enhancing stability – such as increasing liquidity in the bond market – but these advantages can be also reaped without joint liabilities.