Yves here. As someone who does not see in three dimensions, the headline metaphor breaks down for me, but it is still a good attention-getter.

By Izabella Kaminska, a former banker who writes for FT Alphaville. Cross posted from FT Alphaville via New Economic Perspectives

We’ve discussed MMT’s recent foray into the mainstream, and the confusion it has consequently courted.

But that’s the funny thing about the theory. It is naturally divisive because most of the time it fails to communicate its message succinctly. Which is weird, since the premise is actually fairly simple to understand. We’d say it’s akin to looking at an autostereogram. Once you get it, you never see things quite the same way again. But at the same time, try as they might, some people will never be able to see the image. Ever.

And it all rests on one key fact (at least as far as we can tell!) . Rather than treating money as an object of wealth or somebody else’s debt, a means to trade … MMT treats money as a claim on wealth, a product of trade.

This one view makes all the difference. Unlike the first viewpoint, which assumes that debt and money came out of trade, MMT believes debt, or more specifically monetary credit, pre-dates trade. Coinage and all forms of monetary token are thus just a physical representation of what is actually an innate credit system. In and of itself, money — the token — has no value. And this is largely why a fiat monetary system can work. The monetary unit doesn’t need to be a ‘valuable’ piece of metal. It’s who guarantees the token that matters. In modern times, that means the state.

What’s more, suppress the credit system (which in the case of the United States is represented by the government’s debt) and inevitably you suppress an economy’s ability to trade. And this, by the way, is why MMTers believe government debt can never really constrain an economy whose government controls the official currency. Furthermore, this is also why in a time of crisis they believe you need moregovernment guarantees, not less — hence their support of higher debt limits.

If one chart sums up the theory best we think it’s this one from Stephanie Kelton: 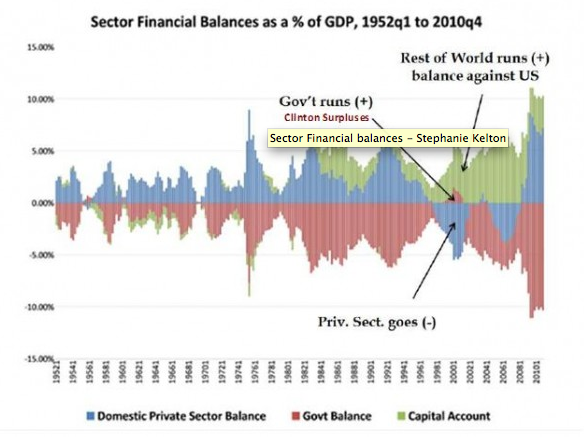 What the chart demonstrates beautifully is the symmetry that applies to the balances of a centrally controlled credit system.

That’s to say, for the US domestic private sector to carry a positive balance, the government must in effect carry a negative balance.

This makes a lot of sense if you think of the United States as representing a completely self-contained credit system, where only one official government controlled currency is allowed (and no foreigners can buy US debt). If the economy is to be kept well lubricated and functioning, the government must be willing to take on more debt on behalf of its citizens when the situation calls for it. Think of it as the private sector positve balances (or savings) representing claims on goods and services which haven’t as yet been redeemed. If not for the government’s negative balance, these claims would be represented by billions of private negative balances instead — representations of debts/credits between individuals. Money earned, and taxed, but not yet redeemed. Everything from your right to redeem a dozen baked rolls from your baker one day in the future, to your right to claim 10 days worth of medical services from your local doctor.

Allowing the government to take on those debts/credits (and really we’re talking more about credits) in place of your counterparties allows for claim standardisation. This not only ensures claims can be redeemed more quickly, having a greater wealth effect on the economy, they can also penetrate the system more completely. Furthermore, they are given a state guarantee in place of a private guarantee.

No more is there a risk that the doctor’s services you earned (by fixing the boiler at the medical centre) are lost because the doctor in question has passed away. You will still be able to redeem the services due to the intermediary role played by the government. Your claim is now against the government, not the doctor. You can thus redeem it with anyone who feels inclined to settle transactions with government paper instead of private paper. And why wouldn’t they? Everyone, after all, has a use for official government currency since it’s the only payment unit which will be accepted for the settlement of tax bills — a.k.a the government’s redemption of the claims it has against you.

In a way, the government, via its debt issuance and willingness to take on negative balances, acts as the ultimate central counterparty, clearer and intermediary to the trillions of transactions and trades that take place in its economy every day. The system’s claims against counterparties (of lesser credit quality than the government) are transformed via the financial framework into claims against the state. This is achieved either by convincing those with positive claim balances into signing them over to the state (via debt auctions) or by having the government “spend” on services directly, creating entirely new claims in the process that then circulate through the system.

Taxes, meanwhile, reflect the government’s own ability to redeem the claims it holds against you, generated in the first place by spending on your behalf.

Of course, if the government runs a budget surplus, and receives more tax receipts than it spends — things can get tricky. Some believe surpluses are actually the equivalent of eating away at the stock of wealth in the system. That’s to say, worse than mere monetary tightening.

That’s largely because there are limits to what the government can do with the surpluses. For example, it can use them to pay down existing government debt (by buying back securities), or to borrow less in the new budget year. Alternatively it can offer more tax cuts, or deploy the surpluses into foreign or private investment securities (a la China).

This, though, is dangerous territory for an economy which is already suffering from a shortage of safe assets already (safe stores of value). That is to say, an economy which has generated more claims than it is currently prepared to redeem.

John Carney at CNBC’s Net Net, for example, has explained the problem as follows:

More importantly, even when it isn’t wasted on stupid government projects, the surplus itself is a waste. If it bothers you that the government spends tax money on bridges to nowhere, you should apoplectic when the government takes tax money and spends it on nothing at all. That, of course, is exactly what happens when our federal government taxes more than it spends. The financial assets of the people are simply confiscated.

But more to the point, if the government runs a surplus, it stands to reason that the private sector has to take on a negative balance in exchange, (see Kelton’s chart once again).

Though, if non-domestic claims against the government enter the frame things get even more complicated still. The debt which was originally intended to help mediate the credit transactions of its own citizens is sucked out of the system entirely, forcing the private sector to mediate transactions with non-government securities (and thus more risky guarantees) instead.

The more demand there is for US government securities from abroad, especially in an environment where the government is not willing to generate additional debt, the more the private sector’s negative balance is forced to rise to compensate.

This, by the way, is a situation we are now arguably seeing in Australia.

The MMT response, of course, would be simple. Issue more government debt and let the government take the negative balance, not the private sector.

That’s not to say, however, that there is never a constraint to debt.

It is possible that the state ends up guaranteeing many more claims than are actually possible to redeem — like with our doctor’s example above, because the counterparties who issued the credits are no longer around to make good on them. In that sense a fair share of the claims circulating through the system routinely represent a surplus. As that share rises, the purchasing power of active claims is reduced, since there are more claims than available redemption options. This will naturally be inflationary, and calls for the government to limit the amount of credit stock in the system, which can be achieved by taxation.

So the question is, which situation are we in now? One where there are more claims than redemption options (capacity to satisfy claims) — thus the rush for safe stores of value, of which there are not enough to guarantee everyone’s claims — or one where there is enough capacity to match claims, but not enough government credit to lubricate the system?

Hard to say, really (presuming you buy the MMT view in the first place).