The whole purpose of a settlement is that a party pays damages to rid themselves of liability, and the amount they pay (and “pay” can include the cost of reforming their conduct) is less than what they expect to suffer if they were sued and lost the case (otherwise, it would make more sense for them to fight).

But in the topsy-turvy world of cream for the banks, crumbs for the rest of us, we have, in the words of Scott Simon, head of the mortgage business at bond fund manager Pimco, in an interview with MoneyNews, lots of victims paying for banks’ misdeeds:

“A lot of the principal reductions would have happened on their loans anyway, and they’re using other people’s money to pay for a ton of this. Pension funds, 401(k)s and mutual funds are going to pick up a lot of the load…

So not only is the settlement designed to shift the costs of the banks’ misdeeds onto already victimized investors, but taxpayers will also be picking up some of the widely touted $25 billion tab. Shahien Nasiripour tells us in the Financial Times that banks will be able to count future mods made under HAMP towards the total:

However, a clause in the provisional agreement – which has not been made public – allows the banks to count future loan modifications made under a 2009 foreclosure-prevention initiative towards their restructuring obligations for the new settlement, according to people familiar with the matter. The existing $30bn initiative, the Home Affordable Modification Programme (Hamp), provides taxpayer funds as an incentive to banks, third party investors and troubled borrowers to arrange loan modifications.

Neil Barofsky, a Democrat and the former special inspector-general of the troubled asset relief programme, described this clause as “scandalous”.

“It turns the notion that this is about justice and accountability on its head,” Mr Barofsky said.

BofA, for instance, will be able to use future modifications made under Hamp towards the $7.6bn in borrower assistance it is committed to provide under the settlement. Under Hamp, the bank will receive payments for averting borrower default and reimbursement from taxpayers for principal written down..

….people familiar with the matter told the FT that state officials involved in the talks had had misgivings about allowing the banks to use taxpayer-financed loan restructurings as part of the settlement. State negotiators wanted the banks to modify mortgages using Hamp standards, which are seen as borrower-friendly, but did not want the banks to receive settlement credit when modifying Hamp loans. Federal officials pushed for it anyway, these people said.

Alys Cohen, an attorney at the National Consumer Law Center, said that if the arrangement increased help, then it was ”good for homeowners in the long term”.

“But in the end the servicers are not really being punished. They’re getting off easy,” Ms Cohen said.

Although, as we all know, there is no final agreement, this appears to be the section of a January 19 term sheet published by the Wall Street Journal that sets forth how HAMP mods were to have been handled as of that date: 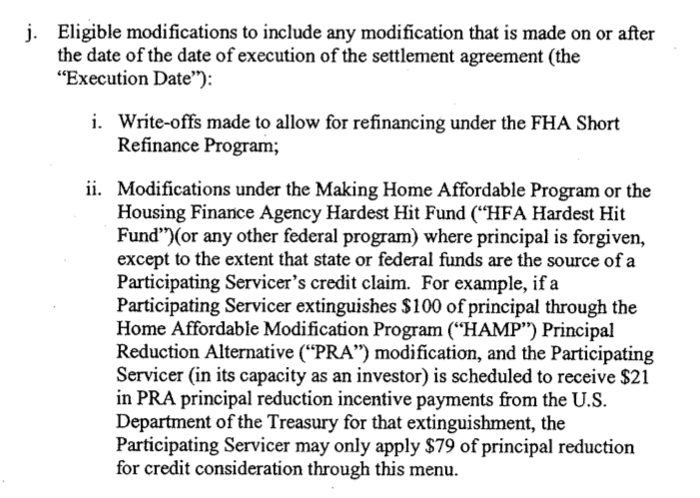 A separate story by Shahien explains how the HAMP credits work:

But in allowing the banks to use taxpayer-funded Hamp to meet their obligations under the settlement, the government presented the banks with an opportunity to reduce their losses, experts said.

“If the banks are doing something under this settlement, and cash flows from taxpayers to the banks, that is fundamentally an upside-down result,” said Neil Barofsky, a former special inspector-general of the troubled asset relief programme.

Last month, the Treasury department announced it was tripling the incentive payments to owners of mortgages who agree to reduce loan balances. By reducing those balances under Hamp, investors – including the banks who agreed the settlement – now will receive cash payments of up to 63 cents on the dollar for every dollar of loan principal forgiven. They also will receive additional funds when borrowers keep current on their restructured mortgages.

In certain situations, thanks to US taxpayers, the banks could suffer minimal losses where the Hamp-assisted principal cuts occur within the first year after the foreclosure accords are finalised. Incentive payments for successful loan restructurings could then turn a profit for the banks, according to people familiar with the settlement terms.

“How can the taxpayer be paying these servicers for a programme that’s supposed to ensure accountability, be punitive and right past wrongs?” asked Mr Barofsky…

More writedowns through Hamp are likely to follow. The largest US banks are increasingly routing principal reduction modifications of their own mortgages through Hamp, according to quarterly data to September 30 from the Office of the Comptroller of the Currency (OCC), a federal bank regulator.

Principal writedowns by banks on their own loans have fallen by more than a third since the principal scheme was launched, OCC data show.

Congressional aides familiar with the settlement’s terms said the administration has set out to use the accords as a vehicle to boost the number of Hamp modifications. Less than 1m homeowners have been granted permanently restructured mortgages. Mr Obama said in February 2009 that the initiative would help 3-4m troubled borrowers avoid foreclosure.

For investors in mortgage bonds, the banks’ use of Hamp to fulfil their borrower-relief obligations under the settlement could further increase the odds that they end up footing the bill for the banks’ alleged wrongdoing.

There is nothing wrong with also using HAMP to try to get more principal mods. But the incentives in HAMP, as Shahien points out, were already enriched to get the banks to play ball. They should have remained separate from this deal. But instead, banks get to game HAMP payments as part of the settlement.

This episode also illustrates the danger of agreeing to a deal where the terms were not final. We and AGs still don’t know where the settlement will shake out. Any negotiator or attorney will tell you there is a world of difference between an agreement in principle and a definitive agreement. Rest assured will find more instances of the AGs being baited and switched before this pact is inked.