If there is one thing that the history of commodity markets tells us it is that if producers can support and manipulate prices in their favour, then they will.

As those who have read my previous two Naked Capitalism posts (here and here) will know, my analysis of the oil market in recent years is that investment banks have enabled oil producers to create not just one but two bubbles in the oil price. The first – a private sector bubble – was from 2005 to July 2008, and then – after a collapse in price from $147/barrel to $35.00/barrel in November 2008 – a public sector bubble was inflated in the first half of 2009 which remains to this day.

I firstly outlined how passive ‘inflation hedger’ investors in Exchange Traded Funds and Index Funds essentially lent dollars to oil producers, and were able to borrow oil in return. In doing so, they not only perversely caused the very inflation they aim to avoid, but also eroded the foundations of the crude oil derivative markets as a risk management mechanism.

Secondly, I explained how much of this flow of medium and long term risk averse investment which has financialized the oil market has used the very same Prepay technique which Enron used to defraud investors and creditors. By creating what is essentially Paper Oil the investment banks who come between the funds and the producers have been able to inflate and distort the market price of physical oil, and hence the derivative contracts based upon that price.

Note here that my view of the oil market in the long term is that the price of a finite resource can only go up.

The US population at large; press; politicians; regulators and the majority of economists all point the finger at greedy speculators, hoarders and price gougers operating on the futures markets such as NYMEX and ICE and blaming them for the sky-high US gasoline prices which result from inflated crude oil prices.

Recent market price moves, and CFTC ‘Managed Money’ market data in relation to the market participation of investors enable us to shine new light on the role of speculators and futures exchanges.

Reuters’ perceptive commodities analyst John Kemp recently suggested that the oil market might be about to repeat the dramatic correction it made in May 2011 when the current speculative ‘spike’ in prices ends.

Managed Money is one CFTC category of market participant, the others being Swap Dealers (such as investment banks), oil producers; and ‘other reportables’ such as certain traders. 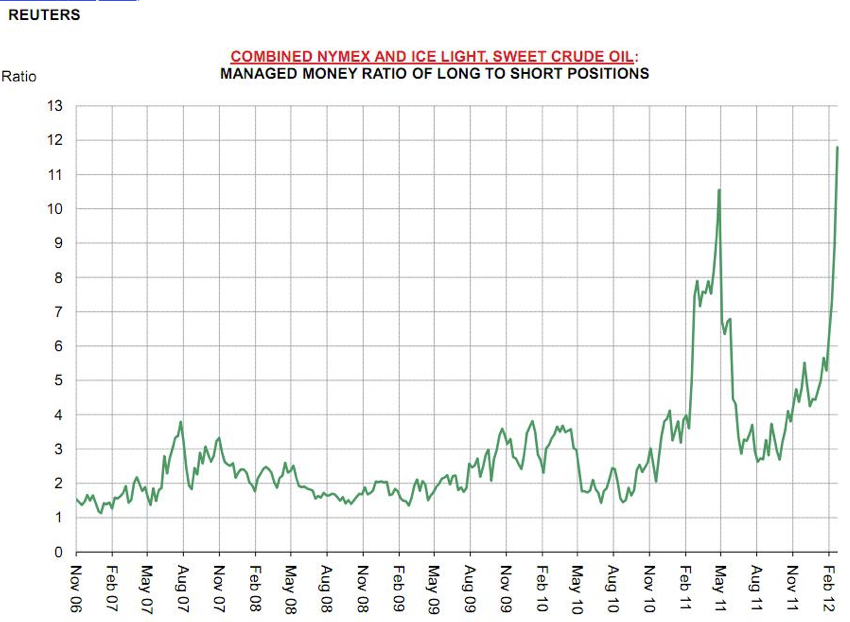 What this COT chart shows in respect of the MM category is not the absolute number of WTI contracts (the MM ‘open interest’) but the relationship between MM investors holding ‘long’ positions, through buying and holding contracts open, and those who are ‘short’ of the market having sold futures contracts.

The first point that leaps out from the chart is that the ratio of Managed Money is always greater than one. This illustrates the long term presence in the market of the passive investors who are off-loading dollar risk in favour of oil risk and who are thereby structurally ‘long’ in the market.

The second point is the way that inflows of active speculative money flows in and out of the market in short-lived speculative ‘spikes’. The first in March 2011 followed the Libya supply shock and collapsed very soon after in May of the same year. Kemp’s point, and mine, is that there is a similar – but even more pronounced – spike now taking place, and that such a spike is an accident waiting to happen.

But there are is another aspect which is very relevant to the relationship between WTI futures contracts and the underlying market which has long been the subject of debate by regulators and economists.

The Curious Incident of the Dog in the Night-time

But throughout that period the Managed Money ratio is not exactly raising the roof, or come to that, disturbing the cellar. So whatever was driving the WTI price downwards and upwards it does not appear to have been either active nor passive investment by Managed Money in buying or selling WTI futures contracts.

In other words, the speculator dog did not bark: so what does that tell us?

As I have outlined previously, there was a wave of ‘inflation hedging’ dollars which poured into commodity markets generally and the oil market in particular in the first half of 2009. My case is that this wave of dollars flowed into the markets through Enron-style Prepay contracts entered into with certain oil producers by a couple of investment banks operating in the Brent/BFOE complex of contracts which sets the global market price in crude oil.

When this financial demand for physical crude oil (paper oil) is added to normal consumer demand the result is a rapid increase in the physical market price, and the nature of Enron-style sale and repurchase use of Prepay contracts is that demand for forward contracts is also increased, thereby creating what became a ‘Super Contango’ market.

Worse, these Prepay contracts – like those of Enron – were invisible to the market at large and they created a ‘Dark Inventory’ of crude oil. This oil was no longer in the beneficial ownership of the producers who had ‘lent’ the oil to the investment banks who acted as credit intermediaries but did not take market price risk. The outcome was that a false market was created in crude oil.

So, if greedy price-gouging hoarders and speculators weren’t responsible, then who was?

I have already written of the way that BP and Goldman were joined at the head for more than 15 years and the probability that a combination of astute marketing; hype and their mutual use of Prepay contracts was instrumental in the first bubble in oil prices.

In relation to the 2008 spike which burst that bubble, some sore losers at Semgroup blamed Goldman Sachs for a market coup of which they were the principal casualty:

What transpired at Semgroup was no less than a $500 billion fraud on the people of the world,” says John Catsimatidis, the billionaire grocer turned oil refiner who is attempting to reorganize Semgroup in bankruptcy court.

The $500 billion is how much the world would have overpaid for crude had a successful scam pushed up oil prices by $50 a barrel for 100 days.

But since 2009, the principal beneficiary – and likely facilitator – of the more recent bubble in prices appears to be J P Morgan Chase, who have had a long and fruitful relationship with the Saudis. Their hire from the wreckage of Lehman Brothers of the former Goldman Sachs oil trading star Jeffrey Frase appears to have been an inspired move which has been a major contributor to their phenomenal recent profits from oil trading.

But whatever the truth behind these murky oil market dealings, I agree with Kemp’s view that market conditions today are not dissimilar to the position in May 2011 when the WTI price fell dramatically in a matter of days, and that the market is similarly exposed today to a ‘flash crash’ like that on May 5th 2011.

I stand by my view that the underlying position of demand in the oil market is such that a flash crash may both wipe out the speculators and then continue, possibly to the extent of taking down the clearing houses which I believe are under-capitalised for the ‘fat tail’ risks they run.