Back in November last year I posted on my confusion over the jubilation shown by the citizens of Spain as they elected Mariano Rajoy as their new political leader. Mr Rajoy’s strategy during the election campaign was to say very little about what he was actually intending to do to address his country’s financial problems, preferring to simply let the incumbent party fall on its own sword so that he could take the reins. It became obvious soon after the election that, despite his party’s best efforts to dodge questions, the intention was simply to continue with even more austerity.

Since that post I have continually warned that although Spain is obviously a different country to Greece in regards to how its problems have manifested, it still faces significant macroeconomic challenges that were not being correctly reflected in the bond market.

…. Spain which I consider to be the major unrecognised problem. The country has seen its yields tumble since December on the back of the ECB’s 3-year LTRO but there hasn’t been anything in the economic metrics of the country to support such action. Spain has 23% unemployment and still rising, the banking system is under-capitalised and still has unknown exposure to the country’s housing market collapse. On top of that the rising unemployment rates is pushing up bad loans in the banking system to 7.4%, a 17-year high, and is still rising.

As I mentioned this week, since I made those comments bad loans have risen further , house prices have continued to fall and the government’s debt position has worsened.

So it should come as little surprise to MacroBusiness readers that overnight the bank of Spain announced that the country has now fallen back into recession:

Spain’s economy is suffering its second recession since 2009, the Bank of Spain said, obstructing the government’s efforts to reorder public finances as it prepares the budget for this year.

“The most recent information for the start of 2012 confirms the prolongation of the contraction in output in the first quarter of this year,” the Madrid-based central bank said in its monthly bulletin today.

Spain’s gross domestic product declined 0.3 percent in the fourth quarter of last year, less than two years after emerging from the last recession. Prime Minister Mariano Rajoy will present his 2012 budget on March 30, amid growing pressure from investors and European peers to rein in the deficit, which was 8.5 percent of GDP last year.

And so, once again, we see failings of economic logic creeping back into Europe. The reason that Spain’s economy is suffering is because the government sector is attempting to de-leverage in the face of the same behaviour from the private sector after the collapse of the Spanish housing market. You can obviously point to all sort of things that happened in the past and claim they never should have been allowed to occur. Where were the bank regulators? the macro-prudential oversight ? the fiscal policy in order to push against the housing bubble?. All good questions, but none of them change the fact that the Spanish economy is demonstrating its current behaviour because of the government sectors attempt to lower its deficit.

As I have explained previously in terms of national income, a country with a long running current account deficit has been borrowing goods and services from the rest of the world. In order to support this one, or both, of the non-external sectors of the economy will have expanding debt positions and due to this the economy tends to restructure around consumption over investment and production. Because the external sector is a net drain on capital from the country, the government and/or private sector must continually expand their debt in order to maintain economic growth.

In many cases this debt accumulation leads to asset bubbles, because the expanding debt drives asset prices which attracts speculation and in doing so accelerates the external borrowing. This in turn drives up national income, which in turn drives higher prices and further speculation. In the EuroZone, if either sector’s debt is accumulating faster than its income then at some point in the future a limit will be reached and the rate of debt accumulation will fall. This leads to falling asset prices and national income, which ultimately leads to a crisis as accumulated debts start to sour.

This is what we have seen in Spain. The private sector accumulated large debts on the back foreign capital inflows leading to a housing bubble. This bubble has since collapsed leaving the private sector in a position of significant wealth loss and indebtedness, the banking system holding significant and growing levels of bad debts and the economy structured around the delivery of a failed industry.

Prices for Spanish homes fell 3.4 percent in the first quarter from the previous three months as the euro area’s fourth-largest economy shrank and reduced mortgage lending crimped demand, according to Idealista.com.

Sellers cut asking prices for existing homes by an average of 2.9 percent in Barcelona, 1.9 percent in Madrid and 2.2 percent in Valencia, Idealista, Spain’s largest property website, said in an e-mailed statement today.

“Prices have continued to fall due to difficulty in obtaining mortgage financing,” said Fernando Encinar, co- founder of Idealista. “Legislation passed by the government in February to push banks to provision for real estate will result in similar declines over the remaining quarters of the year.”

Prime Minister Mariano Rajoy is battling to turn around a slump in the real-estate industry. His government forecasts an economic contraction of 1.7 percent this year that will push Spain’s unemployment rate, the European Union’s highest, to 24.3 percent. The government passed a decree in February forcing Spanish banks to make deeper provisions for losses linked to real estate in an effort to push down prices and boost sales.

The growing unemployment is leading to a slowing of industrial production, which means that even though the country is importing less it also appears to be exporting less. Combine this with the interest payments on borrowings from the rest of the world and at this point Spain continues to run a current account deficit which, in the most basic terms, means Spain is still paying others more than it is being paid back. That is, the external sector is still in deficit.

So with the external sector in this state and the private sector unable and/or unwilling to take on additional debt as it attempt to mend its balance sheet after an ‘asset shock’, the only sector left to provide for the short fall in national income is the government sector. If it fails to do so then the economy will continue to shrink until a new balance is found between the sectors at some lower national income, and therefore GDP.

It may appear logical to you that this must occur, and I don’t totally disagree, but that doesn’t change the fact that under these circumstances there is simply no way that the private sector will be able to continue to make payments on the debts it has accumulated during the period of significantly higher income. This is a major unaddressed issue.

This is why we continue to see a rise in bad and doubtful debts in the Spanish banking system which, under direction from the Government, banks continue to merge.

Spain’s biggest bank in terms of assets has been created after CaixaBank bought Banca Civica for 977m euros ($1.3bn, £817m). The government has amended laws to encourage mergers between banks, many of which collapsed following the bursting of the property bubble.

Banca Civica itself was formed by combining four troubled “cajas”, or regional savings banks. The merged bank will have 14 million customers.

CaixaBank will have 342bn euros in combined assets, deposits of 179bn euros and loans totalling 231bn euros, the bank said. The CaixaBank deal will be completed by the third quarter and will generate cost savings and other benefits of 540m euros by 2014.

The problem is that, apart from economies of scale, merging banks doesn’t actually help that much because impaired assets don’t suddenly disappear. The other issue is that Spanish banks have been large users of the ECB’s 3 year LTRO facility which means they have continued to load up their balance sheets with their own countries sovereign debt in order to participate in the carry trade.

It is quite possible, as I explained above, that the LTRO was masking the true value of those sovereign bonds and that Spanish banks have made a terrible decision by making those purchases. Here are the current 10 year yields for Spanish government bonds, courtesy of Bloomberg: 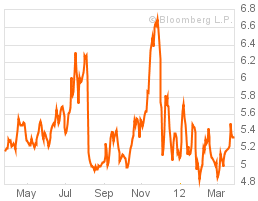 If yields continue to rise, and I see no reason to discount this possibility, then Spanish banks are eventually going to have to front-up more capital to cover those ECB loans. Where exactly is this going to come from?

And so I am starting to get a bit of deja vu.

The eurozone’s public debt crisis is not over despite calmer financial markets this year, the OECD said on Tuesday, with a warning that the bloc’s banks remain weak, debt levels are still rising and fiscal targets are far from assured.

As the eurozone heads into its second slump in just three years, the Organization for Economic Co-operation and Development (OECD) said the 17-nation area needed ambitious economic reforms and there could be no room for complacency.

“Market confidence in euro area sovereign debt is fragile,” the Paris-based economic think tank said in a report on the state of the eurozone’s health. “The outlook for growth is unusually uncertain and depends critically on the resolution of the sovereign debt crisis,” it said.

OECD chief Angel Gurria has called for “the mother of all firewalls” – some 1 trillion euros – but finance ministers look more likely to agree to a level nearer 700 billion euros.

I’m sure we’ve been here before.