This post is by investigative reporter Lee Fang.  Fang knows the ins and outs of DC corruption better than almost anyone else I’ve met.  Here he has documented one of the little noticed but important ways that money sluices in and out of our political system, and heavily influences policy.

One of the biggest problems with lobbying in Washington D.C. is the extent to which so many influence peddlers work behind closed doors, refusing to disclose their clients or register their work with the ethics office. Newt Gingrich became the poster boy for this phenomenon with the revelation that he was paid $1.6 million by Freddie Mac’s lobbying office, a fee the former Speaker laughably tried to downplay as part of a contract for “history” lessons. But Gingrich isn’t the only politician working as an unregistered lobbyist.  I have uncovered video that shows liberal icon Howard Dean discussing his government affairs work for corporate interests. 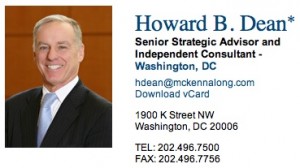 Dean has been lobbying without disclosure for about three years. In 2009 after his stint as chairman of the Democratic Party, Dean joined the law/lobbying firm McKenna, Long & Aldridge as a non-attorney “Strategic Advisor.” The firm’s lobbying practice has a wide range of clients, from health care, to insurance, to even Keystone XL beneficiary TransCanada. The firm website says Dean “focuses on health care and energy issues, as well as providing expertise derived from his extensive experience in public office.” The firm seems to advertise Dean as a lobbyist, despite the fact Dean has not registered as a lobbyist.

I clipped a portion of a video posted online by McKenna, Long & Aldridge that features Dean discussing the post Citizens United campaign finance world along with former Republican Party chief, Michael Steele. Dean candidly disclosed that he works primarily with health care corporations, and that he advises that if they do contribute, they should contribute to both Republicans and Democrats:

During the remarks, Dean later commented that he opposed the Citizens United decision because it creates the strong perception of government corruption for the public.

While it may sound surprising that a former Democratic Party chairman would encourage corporations to donate to Republicans, Dean’s advice makes sense considering his job as a paid consultant to the lobbying firm McKenna, Long & Aldridge. What’s more troubling, however, is how Dean uses his powerful platform as a pundit and political leader without disclosing his work as an influence peddler.

In the media, Dean is typically portrayed as a former governor and liberal political leader. When, for example, Dean called for killing health reform in 2009, using arguments that simply didn’t square with reality, he never disclosed that his lobbying firm was representing major health care interests that were impacted by the bill. Dean has also been linked to a lobbying effort to de-list the People’s Mujahedin of Iran (MEK) as a State Department-recognized terrorist organization.

Other former office-holders, including Tom Daschle and Bob Dole, have joined lobbying firms as “consultants” and have violated the spirit of the ethics laws by refusing to register as lobbyists.