By Walter Dean Burnham, professor emeritus of political science at the University of Texas, Austin, and a leading expert in the quantitative analysis of voting behavior, and Thomas Ferguson, Professor of Political Science at the University of Massachusetts, Boston. Ferguson is the author of many books and articles, including Golden Rule: The Investment Theory of Party Competition and the Logic of Money-Driven Political Systems. Cross posted from Alternet

“No one can serve two masters. Either you will hate the one andlove the other, or you will be devoted to the one and despise the other. You cannot serve both God and money.” — Matthew 6:24 (NIV)

As Rick Santorum exits and Newt Gingrich fades out, who would have imagined that the Gospel of St. Matthew would provide the best handle on the GOP primaries this year?

Even in 2009, it was obvious that the Republican Establishment and many of America’s richest citizens were busy laying the groundwork for a very special effort to take back the White House in 2012. After the 2010 congressional elections produced the second largest swing in the two party vote against the Democrats since 1826, the focus on 2012 became ferocious. The road, though, was bumpy. But by late last year, as one candidate after another flamed out, the hopes of most Obama opponents were settling, sometimes ruefully, on Mitt Romney.

The logic behind their choice was simple and compelling: With the American economy stuck in the mud of the Great Recession, the time was ripe for a campaign centered on economics. With his glittering track record in private equity on Wall Street at Bain Capital before he entered politics, Romney stood out from the rest of the Republican field. He was someone who could convincingly lead a campaign targeted on the economy and jobs. The rush to his standard accelerated after he dramatically embraced many neo-conservative foreign policy positions and advisers.

The result was a shower of campaign money and generally favorable press. With a small army of super-rich supporters lining up to fund his super-PACs (including several who tried clumsily to hide their identities behind various corporate shells) and the rest of his fundraising racing ahead, Romney’s nomination looked inevitable. He could drown the rest of the field in a shower of attack ads.

But his campaign’s single-minded focus on economics ran squarely against the grain of the “holy owned subsidiary” that GOP elites had built up over decades to shift the focus of public discussion from their elite interests in deregulation and the upward redistribution of income through an emphasis on wedge issues like abortion and gay rights. In Iowa, Romney did indeed blow away all his main campaign challengers with a volley of expensive TV ads. But evangelical and conservative Catholic opponents coalesced around the last alternative to Romney who was still standing, Rick Santorum, to deny Romney a decisive victory.

Then came Newt Gingrich, the blast from the past who changed everything. Facing elimination in South Carolina, but retaining just enough ties to really big money briefly to float a super-PAC of his own, Gingrich boldly decided to breach the informal rhetorical conventions of GOP primaries.

He began to bite the hands that had fed him and so many others in the party for decades. Turning his legendary attack skills from Democrats on Republicans, the former Speaker of the House attacked private equity, bailouts, and federal largess to the super-rich. Rick Perry, and other Republicans, including some self-proclaimed Tea Party leaders followed. Santorum, too, drifted along with the new populist current, though far more circumspectly and only after distancing himself from Gingrich’s strident attacks.

The Republican Party’s “Occupy Wall Street” moment did not last long. Thanks to a powerful documentary attacking private equity that his super-PAC promoted and his willingness to throw red meat to voters in TV debates, Gingrich won in South Carolina.

But on the campaign trail Gingrich is hardly Gingrich if he can’t attack. Forced to switch tactics, he started pushing a far-fetched plan to bring down oil prices to $2.50 a gallon. By comparison with the slashing attacks on private equity and unfair taxes, this was a very weak brew. We do not think it at all far-fetched to suggest that his dependence on his donors was a major factor in Gingrich’s subsequent tailspin.

Santorum, whose campaign was also heavily dependent on super-PAC funding from a handful of super-rich donors, walked a careful line. He attacked Romney for supporting the Wall Street bailout. The millionaire former senator also guardedly talked up an alleged affinity for blue-collar workers, while generally sticking with themes more beloved of his donors, such as attacking the Environmental Protection Agency and pushing an energy policy of “drill, baby, drill.”

As the campaign’s sound and fury die down, one might wonder what remains of the GOP’s “Populist Moment.”

Like the frozen lava from past volcanic eruptions, the trained eye can easily perceive traces of the great explosion. Consider the two figures below. Figure 1 relates the percentage of the Romney vote in the GOP primaries to a measure of the strength of evangelical Protestantism in states. (Our measure relies on data from a religious census released in the year 2000 used in an earlier paper rather than voter self reports from polls.) The negative relationship is clear: votes for Romney, in the aggregate, fall as the percentage of evangelicals rises in states. 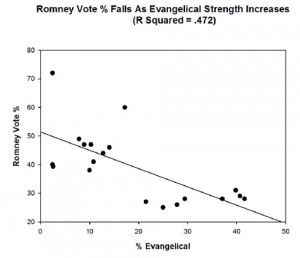 That is no surprise. Yet, as we look forward to the general election, there is a second relationship that is at least equally interesting. Many have noticed that within states, Romney does better in high-income areas. Figure 2 suggests that this relationship also holds between states: Romney’s voting percentage rises directly with a state’s median income. Or in other words, poor states find Romney resistible. 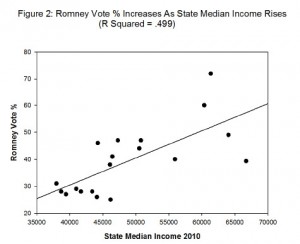 Social scientists and anyone who is inquisitive will naturally ask what happens if you consider both of these measures together. The answer, alas, is that with only 19 data points, you can’t say anything definitive. There is just not enough information to parse the importance of each. (In statistics, the problem is known as “multicollinearity.”)

But stopping there misses a key point, we think. The county maps and polls testifying to the importance of income in predicting the Romney vote within states (the latter have been oddly missing in some newspaper presentations) all suggest that the Republican Party is now divided fairly sharply along class lines as well as religious ones.

In the general election, this may be important. Right now GOP adherents are trumpeting their confidence that the “flock” (as many evangelical ministers might say) will all return to the fold, united in their desire to defeat President Obama. Many of them, in fact, are likely to do this. But we are hardly alone in observing that turnout in the GOP primaries has been mediocre. In a few states, turnout rose above the levels of 2008, but overall, turnout is down.

In the general election, moreover, Romney will have to reach well beyond his base, to independents and those less predisposed toward all things Republican. By contrast with past GOP nominees Romney’s appeal looks modest, limited largely to affluent voters. One may doubt that his endorsement of the Ryan budget will do much to broaden that appeal, either. To win in November, he is likely to need a stupefying large amount of money and a really good Etch-a-Sketch.