This is the last part in a four-part essay by Morgan Sandquist, a member of the Occupy Wall Street Alternative Banking Group. The previous post are In Denial, The Addiction, and An Intervention. Cross posted from mathbabe 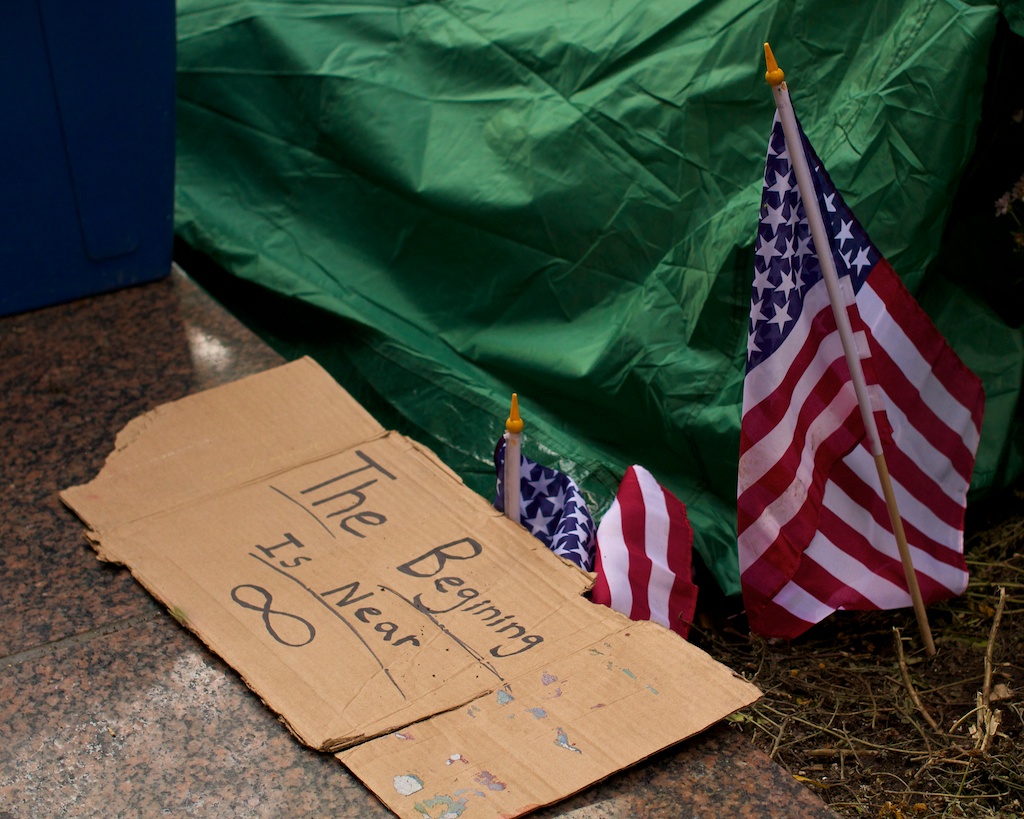 Still sitting in our breakfast nook, with the banking industry squinting grumpily back at us through the glare of the morning sun on the perfectly polished granite table top, we can sit back, rest our hands on the table, and rather than shouting what it expects to hear, playing our part in the script of codependency, we can speak, without pleading or rancor, the truths that are beyond the script.

Rather than repeating once again our expectations and the banking industry’s failure to meet them, rather than pleading with it to live up to its obligations and do what’s fair, we can speak of the mundane practical details of our life and our children’s lives after its eventual demise, of the specific process by which everything around us will be sold to pay the ruinous debts for which its insurance will prove woefully inadequate.

We can make of the inevitability something tangible, rather than a vague, abstract threat. We can catalog the likely disposition of all of the banking industry’s prized possessions and family heirlooms, the eventual owners of everything it values. We won’t engage in a debate over whether the inevitable will occur, nor will we revel in the justice of it, because we’ll all suffer.

The banking industry must take responsibility for the laws it has broken and make appropriate restitution, not because we’re vengeful, but because the connection between choices and consequences so necessary to any successful relationship must be restored. And as long as the banking industry is adamant that it can’t or won’t change, and given the suffering that will follow from that refusal, we have no choice but to regretfully plan for our own and our children’s well-being to the extent we can. Should it accuse us of betrayal, our response is that the first step toward an alternative is one the banking industry must take.

I would have liked to title this section of this essay “Recovery,” but I’m not in the position to do that. I can’t speak to outcomes, only to process. I’m neither imaginative nor prescient enough to suggest what the successful results of our efforts might look like, but I have some idea of how those efforts should be undertaken.

I could use the Twelve Steps of Alcoholics Anonymous (“We admitted we were powerless over debt–that our industry had become unmanageable,” and so on) to describe what might follow from the banking industry taking that first step, but that would be a too literal extension of the metaphor.

The truth is that history offers no examples of the sort of transformation that’s now needed. Though addiction and recovery may offer greater insight into our predicament than yet another political or economic analysis, there’s no reason to believe that the situation will stick to that metaphor as it evolves, even as we proceed with what is essentially an intervention.

Gil Scott-Heron famously said, “the revolution will not be televised.” I take this to mean that any real, fundamental change to the workings of our society, won’t be an entertainment offered by revolutionaries to the rest of us. It won’t be achieved if we sit home waiting for someone on television, or now the Internet, to present us with a number we can call or text, a petition we can sign, or a ballot we can fill out. Our opinions will effect nothing, and our agreement is neither solicited nor required.

I offer this essay not to start another in the endless string of conversations about what is to be done, but to prompt you to do it, whatever it will be, even if what you will do proves that everything I’ve written here it categorically incorrect. I also offer this as an explanation of why I’m doing what I’m doing.

Among other things, I’m working with several participants in the Alternative Banking Working Group on a Web application that will allow people in New York City (and, later, the rest of the country) to find credit unions for which they’re eligible (something that turns out to be far more complicated than you might expect). This will facilitate the return of money from banks, where it functions as an addictive substance, to community ownership, where it functions as a tool in the business of that community.

I do this on your behalf as well as my own, but not in your place. What else will be done and what will come of it will be the result of what you do. The Occupy Wall Street movement is entirely open and will become no more or less than what we make of it. Tomorrow’s May Day events will provide people with the chance to find out for themselves what that movement is, how they can become involved, and what it will become.

With events in more than 115 American cities and many more around the world, you should be able to find an event near you (if you’re in New York City, you can even hear more about the prank played on MF Global by the banks).

Take the day off and meet the people with whom you share this struggle, whether you’ve agreed to it or not. If the movement isn’t what you want it to be, it’s incumbent upon you to transform it as necessary. You can sit home waiting for a movement that checks all your boxes to somehow arise and solicit your participation, but so passive an approach is unlikely to accomplish much.

Let’s all get together on May 1st and see how much we can accomplish in this American Spring.