Yves here. While I applaud the general thrust of this series, I have to take issue with one notion that this essay takes as a given that finance as currently constituted is “core to our economy” and is cautious about the costs and risks of intervention (even though it argues for that course of action).

The case for decisive action is far stronger. The largest financial services firms have perpetrated the biggest transfer of wealth in history via the bailouts. They have gone unpunished for perpetrating the greatest consumer fraud in history, namely, the predatory lending in the subprime phase, the destruction of the integrity of title, and continuing abuses of court procedures. As we wrote in 2010:

More support comes from Andrew Haldane of the Bank of England, who in a March 2010 paper compared the banking industry to the auto industry, in that they both produced pollutants: for cars, exhaust fumes; for bank, systemic risk. While economists were claiming that the losses to the US government on various rescues would be $100 billion (ahem, must have left out Freddie and Fannie in that tally), it ignores the broader costs (unemployment, business failures, reduced government services, particularly at the state and municipal level). His calculation of the world wide costs:

Yves here. So a banking industry that creates global crises is negative value added from a societal standpoint. It is purely extractive. Even though we have described its activities as looting (as in paying themselves so much that they bankrupt the business), the wider consequences are vastly worse than in textbook looting.

Yet its incumbents tout their ‘talent” and insist on their right to mind-numbing pay because their services are allegedly so valuable to the economy.

This means the case for intervention is even more clear cut than this essay suggests.

This is the third part in a four-part essay by Morgan Sandquist, a member of the Occupy Wall Street Alternative Banking Group. The previous post are In Denial and The Addiction. Cross posted from mathbabe 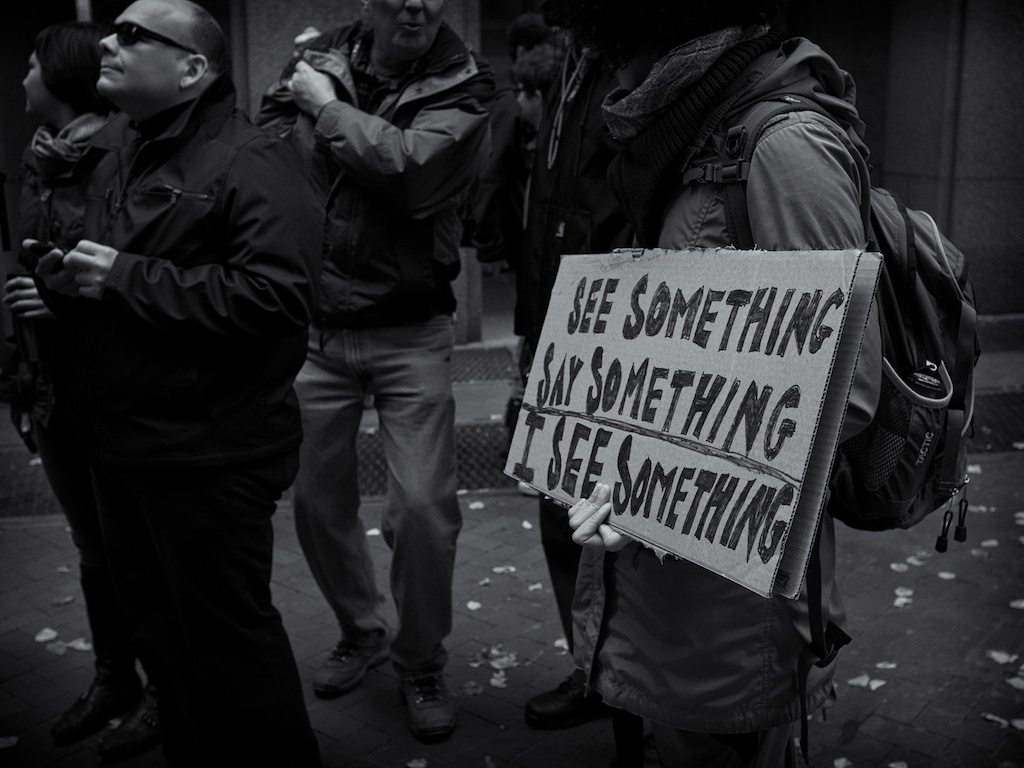 What are we to do with our banking industry, sitting there at the kitchen table in its underwear, drumming on the table with one hand and scratching its increasingly coarse chin with the other in an impossibly syncopated rhythm, letting fly a dizzying stream of assurances, justifications, and accusations, and generally spoiling for a fight that can only be avoided by complete and enthusiastic agreement with a narrative that can be very difficult to follow, let alone make sense of?

Because this is our kitchen too, we have our legal and moral rights. We would be well within those rights to respond to its nonsense with far more coherent and sweeping condemnations of our own. Throwing the bum out in its underwear without so much as a cup of coffee, taking the children, and keeping our share of whatever might be left could certainly be justified.

Though the sense of release offered by those responses is tempting, they’re not likely to be of any practical use. We can’t win an argument with an irrational person, and our share of an insolvent industry is likely to be very little–certainly not enough to feed the children. We have to recognize the hard truth of our implication in the banking industry and its addiction.

This doesn’t mean that we’re responsible for the addiction and its consequences, or that we can make the choice not to continue that addiction on our own, but it does mean that the problem won’t be constructively resolved without our efforts. To the extent that denial is about obscuring the connection between decisions and results, the most effective means of undermining denial is to clarify that connection, and the process of doing that is intervention.

Whether or not its participants are thinking in these terms, Occupy Wall Street, to the extent that it can coherently be referred to as an entity, is in many respects functioning as an intervention into the banking industry’s increasingly untenable addiction to money and debt.

The movement’s core values of transparency, sustainability, and nonviolence reflect the clarity, patience, and compassion needed for an effective intervention.

This is not to say that all of the efforts directed at banks by the movement have been magnanimous or constructive. We have to remember the terrible suffering that has been inflicted upon so many and offer that clarity, patience, and compassion not just to the addict, but also to ourselves as intervenors and to everyone who has been affected by the banking industry.

On the whole, I have been deeply heartened by how this movement has evolved over the last seven months, and though intervention isn’t the easiest or most promising process, it’s one I recognize and know can work (in stark contrast to political revolution). From the beginning, the Occupiers have shown a fearless, poignant spontaneity that’s available only beyond the addiction-centered dynamic of denial, and the banking industry, its enablers, and others still within that dynamic of denial (which, to be fair, has included most of us at one point or another) have responded as would be expected.

The determination and wisdom granted to those who see more clearly is profoundly threatening to those seeking to maintain denial, though of course they wouldn’t be able to say quite why.

The initial objections from the press that Occupy Wall Street was making no demands could be seen as an enabler’s yearning for symptoms that can be isolated and addressed, without admitting to or addressing the addiction from which they arise. To keep calmly and patiently pointing to that underlying cause is simultaneously incomprehensible and maddening to those trapped within denial, and their responses have run the gamut from smug certainty that nothing could possibly be wrong to whistling past the graveyard to ill-conceived and unjustified violence. And the Occupiers’ patience, diligence, and good nature in the face of that decidedly ill will is as textbook an illustration of the process of intervention as we’re likely to see.

It would be all too easy to remain passive in the face of our increasingly delusional, erratic, and combative banking industry. Surely there must be a more palatable alternative to undermining the continued functioning of the complex and highly evolved process that is the core of our economy.

Whatever happens while the banking industry is rehabilitated is unlikely to be worse than what will happen as it continues to indulge in its addiction unaddressed, and it’s unlikely to function any worse upon the completion of its rehabilitation than it is now. As Charles Eisenstein puts it, “any efforts we make today to ‘raise bottom’ for our collectively addicted civilization–any efforts we make to protect or reclaim social, natural, or spiritual capital–will both hasten and ameliorate the crisis.”

Once an addict has reached the point in his or her descent where an intervention is necessary, there’s no realistic possibility of a return to some pre-addiction Golden Age. The apparent paradox that an addict’s life must be destroyed to save it is, stated in those terms, false. The addict’s life only appears to be as yet undestroyed through the lens of denial, and a future life without substance abuse or consequences is an illusion.

But the more gently stated paradox that intervention will cause the addict suffering in the short term to help him or her in the long term is accurate. There are, however, deeper, more intractable paradoxes, and they are those of the psychology of addiction. The process of intervention is often crucial to an addict’s entering rehab and beginning recovery, yet only the addict can decide to enter rehab.

The addict must understand the damage he or she has done in order to stop using but mustn’t succumb to shame, which would simply cause a retreat to the substance. The addict must admit that he or she is powerless over the substance and that life has become unmanageable, but mustn’t surrender to hopelessness and despair, which would sap the considerable motivation needed in the process of recovery. An intervenor must do something, but there’s nothing that can be done. There is no single act, no grand gesture or magic bullet, that can accomplish anything meaningful or lasting. Intervention is a long, unpredictable process requiring superhuman compassion and patience of everyone involved. Prior training or practice in commitment to a process without regard to the outcome of that process is invaluable.

Yes, we can answer the banking industry’s petulant invective in kind, but that won’t fix the problem; the industry will become more defensive and reckless, and we probably wouldn’t end up feeling any better anyway. Our encyclopedic harangue would be cogent, compelling, and convince our friends in the retelling, but no matter how loud we shout it over the banking industry’s coffee cup into that sullen, bloodshot face, it will simply be brushed aside with the wave of a shaky hand and a hoarse grumble, or, worse, it will hit home, and rattled, the banking industry will glare at us and we’ll know that tonight will bring another nihilistic binge of leverage and derivatives, and maybe this time there will be no tomorrow morning. The industry will tell us that we don’t understand, that the pressure it’s under is unimaginable, that life is grim, and that even though it can’t fix that, it should be thanked for what it has accomplished, and that that’s the best it can do. What more could we want? What more could it do? And we can only sigh and shake our head, because we know the simple, honest answer would just fall on deaf ears, and even if it were understood and accepted, the broken soul sitting across the table is in no shape to do anything constructive.

Where denial seeks to divide and conquer, intervention seeks to unify and transcend. Intervention doesn’t respond to denial on denial’s terms, but rather reflects reality as it is. It doesn’t engage in the petty distractions of accusations and recriminations, nor does it seek escape from the addict and his or her problems. Intervention shows the addict his or her choices as they’re made, how those choices are determined by addiction, and the consequences that follow from those choices, but it also shows the redemption that’s always available despite those choices and their consequences.

Where denial is deceptive, impulsive, and selfish, intervention is clear, patient, and compassionate. Intervention finally presents the addict with an unavoidable choice between continued deluded suffering and real, sustainable sanity. The addict may or may not respond positively to that choice, but it must continually be presented on the same terms until the addict surrenders his or her denial.

And to induce that surrender, it’s crucial that the addict be offered an alternative to his or her addiction, whether it’s formal rehab, a twelve-step program, methadone, or a recovery dog. It’s important to recognize that even before the addict became physically or emotionally dependent on the substance, that substance met an otherwise unmet need, and leaving it unmet will lead only to relapse.