The news from Europe was all Spanish overnight as the country continues to struggle to find traction on any plan that will lead it away from the need for external help:

Spain backtracked on a plan to use government debt instead of cash to bail out Bankia, as Prime Minister Mariano Rajoy struggles to shore up the nation’s lenders without overburdening public finances.

An Economy Ministry spokesman said yesterday that the government was considering using an injection of treasury debt instead of cash to recapitalize BFA-Bankia, as laid out in legislation approved in February. Spanish bond yields rose and investors criticized the idea, which the spokesman, speaking anonymously under ministry policy, said today had become a “marginal” option for the 19 billion-euro ($24 billion) rescue.

The government’s push to merge banks continues with the announcement that three savings banks, Ibercaja, Liberbank and Caja3, will vote shortly on whether to combine into a single entity. The merger, if approved, would create the country’ seventh largest financial institution with a combined £96bn in assets. Obviously we’ve seen this before with Bankia, which unfortunately didn’t go to plan.

Spain’s government said it would approve the issuing of joint bonds — “hispanobonos” — by the 17 regional governments next Friday, so as to make it cheaper for them to finance their debts.

Spain’s 17 regional governments have suffered a plunge in tax revenues and soaring debt since the collapse of a decade-long property boom in 2008, and they are struggling to pay suppliers.

Moody’s Investors Service last week warned of the deficit challenges as it downgraded its credit rating for economic powerhouse Catalonia and three other regions, Murcia, Andalucia and Extremadura.

Catalonia president Artur Mas called Friday for the central government to approve the use of “hispanobonos”, which would be issued for all regions and guaranteed by the state.

And so the blurry line between Spanish banks and national and regional governments gets a bit more out of focus. Although this may lower the rate at which the regions can borrow, it is very likely to do the opposite to the sovereign which continues to see yields returning to late 2011 pre-LTRO levels.

These plans, however, will do nothing at all to address the major underlying problem of the Spanish economy and in many ways are akin to a re-arrangement of the Titanic’s deck chairs. The problems of Spain’s economy all stem from the fact that the government sector is attempting ( or being forced ) to implement an austerity program at a time when the private sector is in deep retrenchment. Given the economic and political circumstances the country finds itself in it may have no choice, but that won’t change the outcome. The simple fact is that private sector demand is falling as economic circumstances continue to make it harder for the private sector to recover from the economic shock of the housing market collapse.

Spain will sink deeper into a recession in the second quarter, the Bank of Spain said, as data showed retail sales fell by a record annual rate in April.

Indicators suggest output will keep falling in the quarter through June, the central bank in Madrid said in its monthly economic bulletin today. The National Statistics Institute INE said retail sales dropped 9.8 percent on a calendar-adjusted basis last month, the most since the series began in 2004. 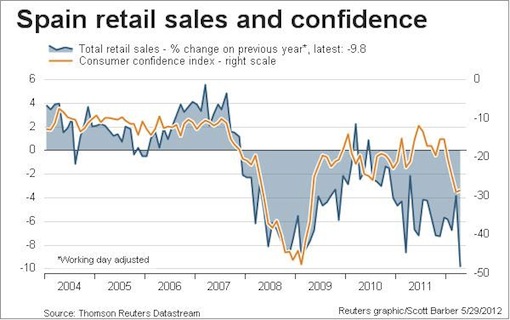 And in an ominous sign that things are about to get worse, the Governor of Spain’s central bank hasannounced he will depart his position earlier than intended:

The governor of the Bank of Spain said Tuesday that he would quit his job early, just days after watching the country’s banking sector sink deeper into crisis because of a huge bailout request from Bankia, the country’s biggest mortgage lender.

Miguel Ángel Fernández Ordóñez, the governor, told Prime Minister Mariano Rajoy that he would leave a month ahead of schedule, on June 11, arguing that his early departure would give his successor a chance to take better charge of the situation and open “a new chapter where important decisions must be taken.”

Although the Spanish bourse was off overnight it seems other markets are bouncing about on the perception that if things get any worse there will need to be some more action from central banks. The ECB, however, continues to throw cold water on that idea:

It is up to national governments, not the European Central Bank, to rescue any banks that get into trouble, ECB policymaker Ewald Nowotny said on Tuesday, adding that the central bank was not discussing restarting its bond purchases or priming to cut rates.

Fellow central banker Andres Lipstok reinforced the message, saying European central banks are being pushed into functions that are alien to them and that the ESM bailout fund would be a more suitable vehicle for tackling the bloc’s debt crisis.

Asked by reporters about problems in the Spanish banking sector, Nowotny, who is Austria’s central bank governor, said the problems were ‘unfortunate’.

“We have to be aware that rescuing banks is the responsibility of national governments,” he said. “The role of the ECB is in the field of liquidity and not solvency.”

Which leads to the question, what happens when the nation in question is also having solvency issues?