I should never underestimate the ability of Verizon to fail to deliver. Internet down all day and still down. Was promised to be back “no later then 6”. Now “no later than 5 tomorrow”. I refuse to be extorted into buying a data card when I would not use it ten + months of the year. Ditto smart phone, when I leave my desk I leave the web by design. So now at Starbucks. Links and posts may be thin as a result.

Too rich to queue? Why markets and morals don’t fit Guardian (John L)

Greece shouldn’t quit euro, just austerity measures AP (Aquifer). Radical Left party leader Alexis Tsipras. Polling shows RL has increased its share to 28% (128 seats) from 16.8% (52) during the negotiations to form a government. If negotiations fail, a new election will be held within a month.

The Momentum of Lies Golem XIV

Some Congress Democrats Split With Obama on Gay Marriage Bloomberg

Your retirement health-care tab will run $240,000 Marketwatch (Carol B). The plan is clearly to have old people die faster.

The Thing That Couldn’t Die: Yucca Battle Continues in Congress and in the Courts Gregg Levine, Firedoglake (Carol B)

OCC Dismisses Foreclosure Review Consultant Amid Independence Concerns American Banker. They noticed this only now? Why were they approved in the first place? Our Michael Olenick called this one.

Gay marriage feeding frenzy. “If his evolution continues to fall short, then those interested in equality in this country must abandon their support”. Dustin Lance Black on April 26, 2012, before Robama had the most glorious evolution in the history of the world. So what does not “falling short” mean? What did it take for Robama’s gay bundlers to open the money spigot again? “My personal view.” No ENDA, no executive order, and leaving it up to the states. “Honey, I’ve changed!”

What’s the matter with Dupont Circle?! Can nobody see the Lucy and the Football moment on tap here? Meanwhile, “liberal bloggers” (fine, fine triumphshillism here) get a smidge of compliance-inducing reflected glory in Pravda. But since Robama’s “personal view” doesn’t imply party discipline, Ds continue to throw gays under the bus in state elections. And “the convention is staying in Charlotte”. Dance with the bank that brung ya!

Bullying feeding frenzy. The Rs have a media critique, but Poynter shreds it. “This story is especially suspicious given its timing”. Snort. Coffee’s for Rovians. Shorter Althouse: “No, him!” Not either/or. Both/and. “Mitt Romney a bully? The answer is no…. He does not have a vicious bone in his body”. But “How Could Romney Not Remember Cutting a Kid’s Hair”? Well, because Obomney’s a narcissistic socipath, I would imagine; isn’t that part of the job description? Really, what is there to choose between “prank or hijinks” and “Two words. Predator Drones”? And speaking of narcissism, how many autobiographies did Obomney write? One? Two, like Robama? With how many composite women in them? Sullivan raises a point of privilege: “I went to an all boys high school in the 1970s”. As so did we not all.

Clooney shindig. “Obama hangs with Clooney in L.A”. Note Pravda’s faux-youthful locution. “Clooney Fundraiser Nets $15 Million For Obama Campaign”. Jeffrey Katzenberg (SEC; China; bribes): “Yesterday, he did the right thing.” Cigarette? Meanwhile, lucky winners Topinka and Blutcher “sat toward the rear of the tent”. Topinka: “Rick Santorum put me over the edge,” she says.” Whenever he irritated me, I would donate to Obama”.

Robama. Izvestia takes Robama to task: “This is a president and a White House that has not always been unwavering in taking positions of principle”. The liberal media is s-o-o-o wrong and unfair. The president and the White House have been entirely unwavering in their devotion to the principle that banksters should never be prosecuted for crimes. Also, too, torturers. “Obama to skip [September] summit in Russia, according to media report”. Too busy being elected. And planning October surprises. But too bad. I’d like to see Robama sit down at RT’s glass table.

Obomney. “His retooled high command has been mercilessly efficient at wrecking his various GOP challengers the moment any of them got too close for comfort”. True. It will be interesting to see whether Obomney can gin up his own feeding frenzy, or whether our famously free press has already cast its vote for Robama. Speech tomorrow at Falwell’s Liberty University. A taste: “[OBOMNEY] This is a time when we can follow this president down a road of decline and weakness or we can take a course that is based on a positive dynamic and a bold vision for this country”. Or a bold dynamic and a positive vision. The choice is yours! Liberty University student: “I wouldn’t call [Mormonism] a cult, honestly, because I think that’s taking away from the power it has.”

“The [whose?] economy”. Robama at a WA fundraiser in Washington State on the recession he inherited from Bush: “And sometimes people forget the magnitude of it, you know?… Sometimes I forget”. Empathy! I don’t forget, because I’m still in it, plus everyone I know, along with the 8.1% (nominal) DISemployed. That’s why — snicker — I’m clinging to guns and religion. To be fair, Robama was at a fundraiser, and anybody who can pony up for rubber chicken is likely to “forget it” too. Except, of course, the “lucky winners.” At the back of the tent. Extended jobless benefits are cut in eight states.

Clinton 2016 watch. Ed Rendell wants to be Hillary’s campaign manager in 2016 (hat tip, Atrios). That’s the worst idea I’ve heard in years. Rendell called for Gore to throw in the towel when Bush stole FL 2000, even before the court-mandated hand recount was complete.

WI recall. “[WALKER:] The first step is, we’re going to deal with collective bargaining for all public employee unions, because you use divide and conquer” (link to full transcript, not video). Outside spending: “Twenty million bucks and it’s essentially a dead heat”. GOTV with 4% undecided: Capitol Occupiers aren’t “players,” but if they aren’t fully involved, the Ds will lose. Which could be the very reason for the lack of support from the national Ds. See under Institutions, Iron Law of.

Green Party. New Paltz, NY Mayor Jason West: “Until [Robama] starts pushing for a federal law, the various Gay-Straight Alliances in any high school in the country are doing more to advance the cause than he is”. Ouch!

* 119 days ’til the Democratic National Convention ends with TV dinners on trays in front of the big screen at Bank of America Stadium, Charlotte, NC. Cross-posted to Corrente. 119 just isn’t an interesting number. Except if you play it backwards. And please, no “Paul is dead” jokes. He isn’t!

Source of “What’s the matter with ___ ” snowclone is Thomas Frank’s best seller, revered by career “progressives” as part of the “We’re smarter than you” narrative.

Antidote du jour. Shot by Stuart G’s wife on Park and 60th Street on May 7. And that is a guinea pig climbing onto a cat. 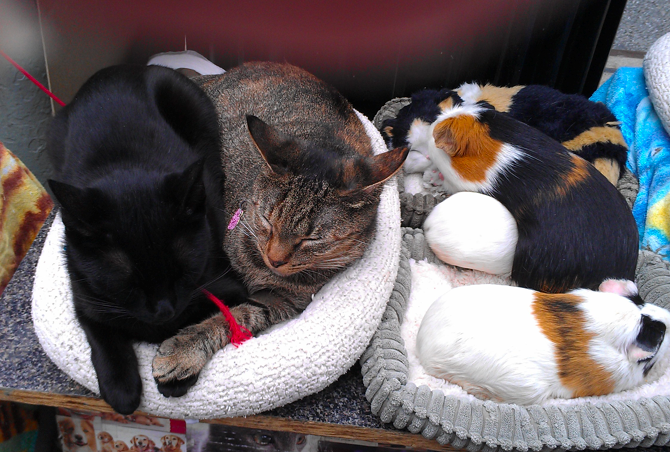