As I type about 75% of the vote in the second Greek election in a month has been counted and the leaderboard looks like this. 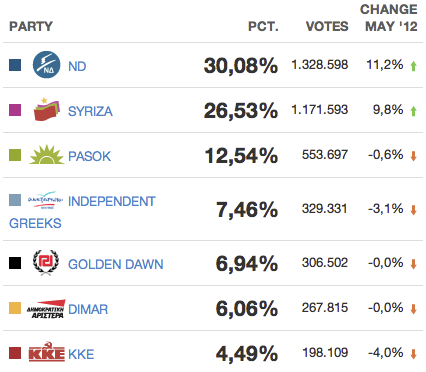 So it would appear that New Democracy will win approximately 130 seats of the 300 available and therefore technically be able to form a ruling coalition with any of the other top 4. I say “techinically” because there are already reports out of Greece that their previous coalition partner PASOK has stated it won’t form a coalition with New Democracy unless SYRIZA comes on board as well. SYRIZA has already ruled this out stating it will stay in Opposition. This suggest that PASOK officials are concerned that New Democracy will be quickly ousted from parliament due to undeliverable promises leaving SYRIZA in a position to cement its power come a new election. In other words, PASOK appears to want everyone to drink from the same poison chalice because it doesn’t want to be caught on the wrong team if/when the new government fails.

Now there’s confidence ! But I guess I can understand the political dilemma.

Even though New Democracy appears to be the less extreme option it wasn’t long ago that Antonis Samaras was the bad guy of Greece and the post-election statements from the German foreign minister are a stark reminder of the road ahead:

German Foreign Minister Guido Westerwelle signaled on Sunday that Greece could get small concessions from the euro zone over its painful bailout programme but nothing like a full renegotiation.

“There can’t be substantial changes to the agreements but I can imagine that we would talk about the time axes once again, given that in reality there was political standstill in Greece because of the elections, which the normal citizens shouldn’t have to suffer from,” Westerwelle said on German TV station ARD.

“But there is no way out of the reforms. Greece must stick to what has been agreed. If we said to Greece, no matter what we agreed, it doesn’t matter anymore, then we would get a problem with all the other European countries that are diligently and persistently implementing their reforms.

Although in comparison to SYRIZA New Democracy is seen as a pro-austerity party their political campaign was based on re-negotiating the terms of the bailout. This included not only extending the period of fiscal adjustment, but also slowing down the rate of public spending cuts, extending unemployment benefits, retaining more staff in public organisations and reducing taxes. Given the stance of Europe these promises would appear completely undeliverable and likely to give any opposition a very easy target.

Either way a win by New Democracy is sure to be seen as short-term positive as it negates the immediate existential explosion of the Eurozone, but it changes very little in the medium or long term. The focus of the crisis has moved on from Greece to Italy and Spain, and although I have been saying for a very long time that the economic policies directed towards Greece are utter delusion it isn’t the outcome of this election that is going to change them. The centre of the crisis has now moved west of Greece and a New Democracy win may in fact be further bad news for the other weaker economies because it takes some pressure off Europe to provide a more immediate resolution to Spain.

So good news today but same old news tomorrow I suspect. But lets wait and see if we actually get a working parliament in Greece before stepping too far forward.

The Greek election wasn’t the only show in town over the weekend. The French were at it as well:

The Socialist bloc secured between 296 and 320 seats in the parliamentary election runoff, according to reliable projections from a partial vote count, comfortably more than the 289 needed for a majority in the 577-seat National Assembly.

The result means Hollande won’t need to rely on the environmentalist Greens, projected to win 20 seats, or the Communist-dominated Left Front, likely to have just 10 deputies, to pass laws. The centre-left already controls the upper house of parliament, the Senate.

This victory should allow Francois Hollande to have explicit parliamentary control as he tries to steer Germany onto a more growth orientated path for Europe. That is most certainly the message he’ll be taking to the G20 in Mexico this week.