By Sell on News, a global macro equities analyst. Cross-posted from Macrobusiness.

The slow motion train wreck that is the Euro is grinding relentlessly on. Commentators are smugly, if not gleefully, announcing the currency’s imminent demise, enjoying their triumphant occupancy of the moral high ground. The European elites are just as determinedly asserting that the currency will survive, looking for some sand to stick their heads in. The financial markets are looking to exploit the situation to best advantage, gloriously mixing self righteousness with hyper venality. It is quite a soap opera, a sort of financial Groundhog Day.

The noise is obscuring the real questions. The most obvious of these is: “What will the currency markets look like when the situation is resolved?”

It is worth recalling why the Euro was created. It was established to establish a bulwark against the financial markets, which were wreaking havoc with Europe’s Exchange Rate Mechanism. Sovereign governments in Europe were trying to protect themselves against financial markets, specifically hedge funds and the likes of George Soros, in order to protect their control of money. There were also ancillary ambitions to have a reserve currency like the greenback, but that was always on the margin, for reasons I will explain later. It might be added that the greatest absurdity of the current situation is Soros pontificating about European policy and fretting about the power of the financial markets. A tour de force in hypocrisy to accompany his many achievements in making money, I suppose. A bit like an assassin complaining about rising crime rates.

In terms of structure, there seem to be three possibilities. First scenario is that the Euro survives and the world moves into a three part currency world: the American dollar, China’s yuan and the Euro, with the yen, Swiss franc and Australian dollar on the sidelines. This would have an effect on the power of the greenback as the world’s reserve currency because there would be significant euro-yuan trade, partially sidelining the $US for the first time since the 1950s. (That is why the Euro is not a reserve currency, by the way, because 80% of its trades have the $USD on the other side). It would create three currency regions: Europe, Asia and America. A bit reminiscent of the three super states in 1984 it will just have arrived about 40 years late.

Second scenario is that the Euro breaks up, with the world being dominated by the greenback and the yuan. This would leave the $USD with its hegemony, allowing America a degree of financial freedom on its economic policy that no other country enjoys.

Third scenario is that the Euro collapses and the world starts to revert to a more nationalist currency regime, as it had twenty years ago. Once again, this would leave the $USD supreme.

For what it’s worth, I consider the first scenario the most likely, the second fairly likely, and the third unlikely.

In terms of their sound function as money, the question is which system creates the most redundancy, that is, extra capacity to absorb shocks when things go wrong? This is crucial in a system that only relates to itself. I suspect scenario one is probably the most stable, although scenario three may also have capacity to absorb shocks. Scenario two, which would be similar to the current Euro-$USD axis, is unstable, as we are seeing. In a self referring system dyadic structures (i.e, binary) tend to magnify problems, because they keep bouncing off each other, they have nowhere to go to release the pressure.

In terms of their character, the currency markets are likely to become increasingly post-modern. They have no objective standard; it is an exercise in total relativism. That is why gold bugs look so longingly at the yellow metal, they are pining for an absolute. Thus, when it is said that a currency weakens, it only weakens in relation to other currencies. There is no absolute measure of value. This does not seem to be well absorbed by financial market commentators and politicians. For instance, at the moment, much is being made by traders about the Euro falling to about, 1.1 against the $US, as if that is some harbinger of doom. Yet the Euro has been a lot lower against the greenback, at the moment it is in the mid range: 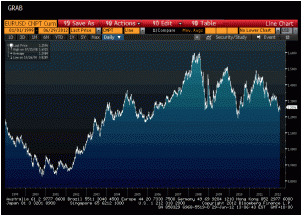 What one notices when looking at this graph is the volatility. These major currencies have swung in a 100% range since the establishment in 1999. Such extremes can hardly be explained by differentials between their respective economies, or trade, current and capital account flows. They are a measure of sentiment amongst traders. In a world where there is no absolute, perception rules. It is a kind a idealism in which the idea comes first before reality:

idealism is the group of philosophies which assert that reality, or reality as we can know it, is fundamentally mental, mentally constructed, or otherwise immaterial.

Such idealism pretends to be realistic, based on objective truth, however. The currency markets are nothing if not riddled with contradictions. What it means in practice, was nicely described by an anthropologist friend of mine commenting on my piece last week about Peirce and pragmaticism:

So to understand pragmatism is to apply Peirce’s “pragmatic maxim” or rule. That rule was based on identifying the meaning of the behaviour in question (in our case, the transaction). And where the person was acting on the basis of his or her understanding or intent, it was necessary to identify the signs they were basing their understanding.

In this way, Peirce’s pragmaticism was an explanation, or theory, of meaning in action. Which is to point out that Peirce’s was not a theory of truth but a theory of meaning. (Some later philosophers have recognised this material difference, and adhered to it. But not all. And some scholars have criticised Peirce’s philosophy for the way it deals with truth, which is wrong to do.)

The currency markets are not concerned with truth, they are concerned with meaning. What is yet to emerge is how that meaning will play out in terms of the market structure. What we do know is that it will be extremely volatile, and fast moving. Crises are becoming the norm, which is to say they are no longer crises. That means countries can recover as quickly as they can get into trouble.