John Giddens, the bankruptcy trustee in MF Global, garnered headlines Monday by saying that he will decide in the next 60 days whether to filing suits against Jon Corzine and other officers for breach of fiduciary duty and negligence and against JP Morgan if he is unable to come to a settlement. JP Morgan so far has returned roughly $518 million in MF Global assets and $89 million in customer monies, a meager recovery relative to $1.6 billion in missing customer funds.

The report Giddens released Monday is thorough and confirms many of the observations made in journalistic accounts of the firm’s collapse, particularly regarding inadequate risk and accounting controls, JP Morgan’s aggressive posture greatly increasing the liquidity squeeze. It also makes clear that this is an interim report, and unlike the trustee’s report on Lehman, says that reaches no conclusion regarding legal strategies, including whether prosecutions are warranted.

But a stunning revelation that comes early in the account and is central to the failure of the firm does not get the emphasis that it warrants.

What is not surprising but nevertheless important is the way the document depicts MF Global as a train wreck waiting to happen. Ironically, the firm is a casualty of ZIRP. MF Global historically had gotten most of its income from low risk activities, such as interest on customer margin. Its net interest income from those sources fell by $3.5 billion from 2007 to 2011. Corzine had embarked on a strategy of turning the firm into a full service investment bank, an approach we deemed doomed to fail. To get there, Corzine took an approach that was similar to the one of Lehman and Bear, who were vastly less behind the industry leaders than MF Global was: putting lots of their chips in high risk, high profit potential activities (for Bear and Lehman, real estate; for MF Global, prop trading, specifically, Corzine’s Eurobond trade) in the hope that they could grow more rapidly than the top firms and thus close the gap with them.

But if you are going to increase firm-wide risk in a big way, particularly in a trading firm, it is critical to have solid risk and financial controls, and MF Global’s internal audit had reported considerable shortcomings on this front in 2010 and 2011. Yet Corzine went gung ho for growth without having those in place; indeed, as was recounted in the media and in the report, the chief risk officer, Michael Roseman, was evidently forced out for daring to tell the board he was concerned about the magnitude of the Corzine’s Eurozone bets and made sure his successor was less influential. Giddens criticizes MF Global management for both increasing trading risk and entering into new lines of business without making the needed investments improving Treasury processes, trade reporting, and liquidity management.

Not surprisingly, the firm was under stress considerably before the crisis hit. Even though Corzine’s approach improved the firm’s results, it was still losing money. And the rating agencies didn’t simply want MF Global to be profitable; they required the company to earn $200 million pretax to keep an investment grade rating (being downgraded would and did produce a death spiral, since counterparties would demand higher collateral postings from an already-liquidity-strained and highly levered firm). So the firm was running out of runway and was not even close to achieving takeoff speed.

The report recounts how the firm was coming apart before the denouement, which was triggered by Finra determining that the firm was capital deficient and demanding an infusion of $183 million, which the ratings agencies ignored until a Wall Street Journal story six weeks later, on October 17, forced them to take action. Employees were unclear as to whether some of the increasingly aggressive ways they were using funds in customer accounts were permissible. And the money shuffling was reaching a scale and complexity that even if it wasn’t pushing the envelope, a screw-up was likely. From the report:

During the summer of 2011, some senior executives appear to have been in deliberate denial of the extent of the liquidity stresses. Most strikingly, on August 11, in an email exchange between Ms. O’Brien and a Global Treasury employee at MF Global Hong Kong, Ms. O’Brien wrote that “Henri [Steenkamp] says to me today . . . ‘we have plenty of cash.’ I was rendered speechless and wanted to say ‘Really, then why is it I need to spend hours every day shuffling cash and loans from entity to entity?’”, a process that she described as a “shell game.”

Stenkamp was the CFO. The fact that he was telling employees, and perhaps investors, that the firm was well funded when it wasn’t, at best shows how poor management controls and information were. (Another issue flagged by the report is that there had been a good deal of turnover in Treasury and related functions. This made a bad situation worse, since seasoned employees were compensating for gaps in formal reports by communicating with each other via e-mails and journal entries). Note this is consistent with the argument made before on this blog, that MF Global is a prime candidate for litigation, potentially prosecution, for Sarbanes Oxley violations, namely false certifications about the adequacy of internal controls.

The report includes 53 (!) pages of charts in the report which attempts to track this cash and loan shuffling in the final days: 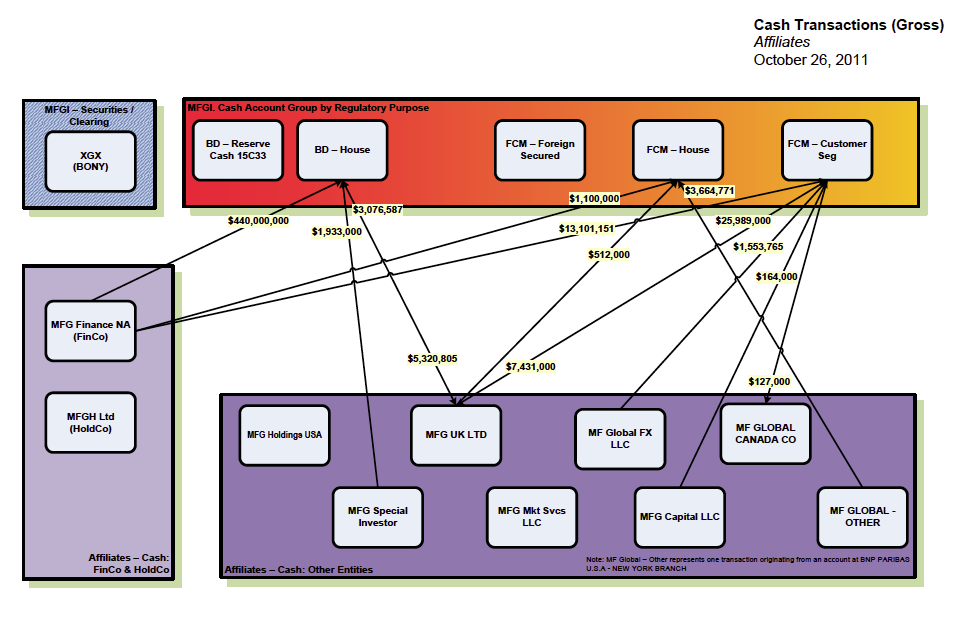 But the real stunner comes early in the report, and the media write ups thus far seem to have missed it completely. Recall that the trade that felled MF Global was one directed by Corzine, and has been depicted as a repo-to-maturity trade, in which the maturity of the repo matched that of the underlying asset exactly. That in turn allowed the trade to be treated as off balance sheet, which was helpful in presenting the firm’s results to ratings agencies and analysts.

The bet that commentators focused on was that the European governments would not default before the maturity of the short-term trades, and the transactions allegedly would have worked out had MF Global survived. (Note that press commentary has focused on an Italian bond). The problem has been widely described as one of short-term price moves, namely, that Corzine and other managers allegedly did not know that if the price of the maturing bonds it bought fell more than 5%, it would have to post more collateral, and that adverse price moves triggered the liquidity crisis.

It turns out this description of the trade isn’t accurate. It never was a real repo to maturity, as in maturity match funded externally. The funding was two days shorter than the maturity of the asset. But, no joke, MF Global dressed that up internally and somehow got accountants and regulators to buy off on this bogus characterization. And even worse, this scheme produced book profits at the expense of liquidity, the real scarce commodity at the firm:

Among the lines of business that Mr. Corzine built up to attempt to improve profitability at MF Global was the trading of a portfolio of European sovereign debt securities. These trades provided paper profits booked at the time of the trades, but presented substantial liquidity risks including significant margin demands that put further stress on MF Global’s daily cash needs.

The European sovereign debt trades were structured as “repos to maturity” (“RTMs”). In these transactions, sovereign debt securities purchased by MFGI at a discounted price were repoed back to its affiliate, MFGUK. Because the termination of the RTMs between MFGI and MFGUK was the same date as the maturity of the sovereign bond, accounting rules allowed MF Global to account for the RTM as a sale, and therefore record an immediate gain on the sale, while removing the transactions from MF Global’s consolidated balance sheet. The corresponding repo transaction between MFGUK and LCH.Clearnet (previously known as the London Clearing House (“LCH”)), however, was for a term two days shorter than the maturity date of the underlying bonds. This disparity meant that MFGUK — which turned to MFGI to provide funding — would ultimately have to finance the sovereign bonds for the two-day window, thus increasing the amount of cash MFGI needed to maintain the RTM portfolio. In addition to addition to this liquidity risk as between MFGI and MFGUK, MFGI continued to bear the risk of default of the bonds themselves…

As the Board and management were aware, the exposure from this portfolio was the equivalent of 14% of MF Global’s assets as of September 30, 2011, and was more than four-and-a-half times MF Global’s total equity, a level that was orders of magnitude greater than the relative exposure at other, larger financial institutions.

This schematic shows how the trade worked: 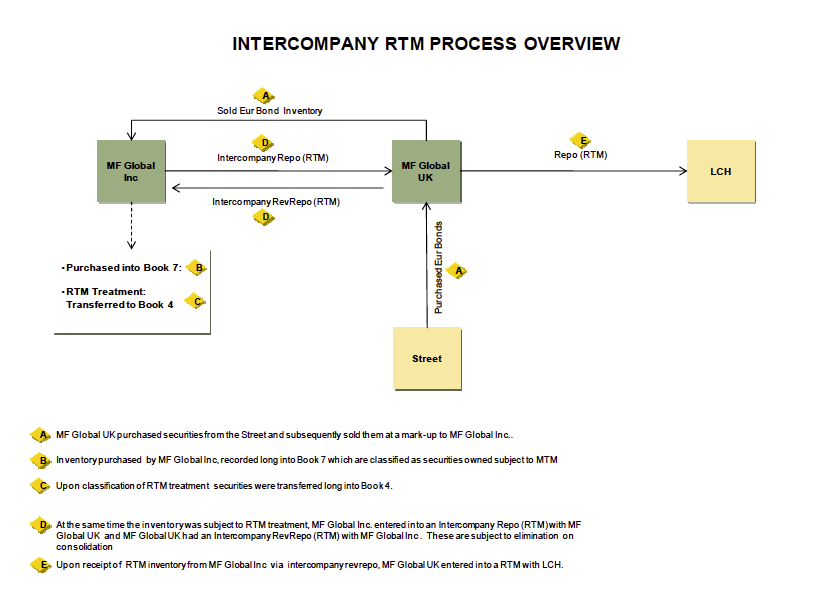 As we noted earlier, these transactions were given off balance sheet treatment (in the stone ages of my youth, the term of art was “defeased”, the new lingo is apparently “de-recognized”). The report accepts the claim of management that this treatment was kosher under US GAAP and flags this disclosure in the June 30, 2011 10-Q:

The Company also enters into certain resale and repurchase transactions that mature on the same date as the underlying collateral (“reverse repo-to-maturity” and “repo-to-maturity” transactions, respectively)…For these specific repurchase transactions that are accounted for as sales and are de-recognized from the consolidated balance sheets, the Company maintains the exposure to the risk of default of the issuer of the underlying collateral assets, such as U.S. government securities or European sovereign debt. The forward repurchase commitment represents the fair value of this exposure and is accounted for as a derivative. The value of the derivative is subject to mark to market movements which may cause volatility in the Company’s financial results until maturity of the underlying collateral at which point these instruments will be redeemed at par.

Query whether this disclosure was adequate. While it does flag the exposure to default risk and adverse price movements, it does not mention the hazard that proved fatal, namely, that this trade produced accounting (and hopefully in the end actual) profits but with ongoing liquidity demands that an astute reader would not anticipate existed with a trade that was a true (as opposed to internal) repo to maturity.

Top management looks even more out-to-lunch than previously thought, since MF Global had experienced large margin calls due to unfavorable price changes in the bonds used in these trades, the first time in October 2010 on some Irish sovereign debt, and an even larger haircut on Irish and Portuguese sovereign debt in September 2011.

As Michael Crimmins said via e-mail:

The repo to maturity trade that enabled MFG to disappear the position was an INTERCOMPANY trade between MFGI and MFGUK. The ACTUAL repo with the street (MFGUK to LCH) was repo to (maturity-2 days).

The external auditors and the regulators waved it through anyway.

Since the entire business model rested on this fiction, the customers were doomed at the point this was approved.

The resulting catastophe was inevitable and all the issues about chaos in the final moments and feuds between Treasury and Accounting and antiquated systems is noise.

The regulators could have shut him down on day one. Using intercompany accounting to game the regs is compliance 101 stuff, so the regulators can’t claim they were bamboozled by the slickest guy in town. They were idiots, genuinely or conveniently, you decide.

At least Lehman had the decency to pay its counterparties to rent their balance sheet to pull off their scam. Fuld must surely envy Corzine.

But sadly, this scam isn’t likely to get the attention it deserves, since the otherwise substantive report does not question the accounting characterization of this trade. And that means, yet again, the key enablers are likely to get off scot free.