The words that have never been spoken and perhaps can never be said.–Anonymous

If the Presidential campaign seems vacuous to you, that’s because it is. Here are some questions that “we” — by which I mean the legacy party campaigns, their enablers, and our famously free press — can’t seem to bring ourselves to ask during the campaign. So, I’m going to ask them now:

1. How did 8% nominal unemployment become the new normal? Here’s last month’s version of the most frightening chart in the world from Calculated Risk: 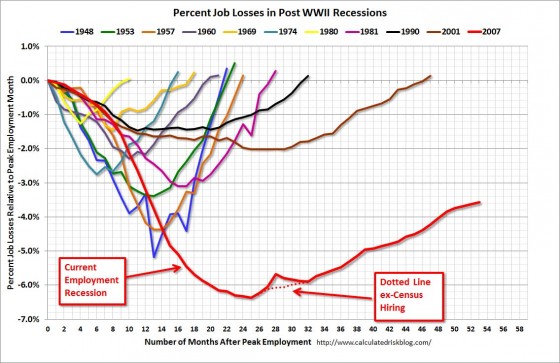 From where I sit, the employment market flatlined in 2008 and never recovered, and the 2007-2012 curve looks like successfully achieved public policy. Clearly, that’s true for government employment, where the current powers that be, uniquely for the four recessions since 1981, engineered a decrease in public sector employment, as Ezra Klein (of all people) points out: 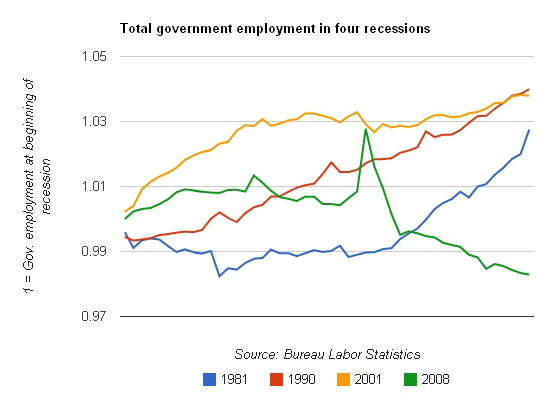 Republicans, as Klein also points out, honor “shrinking government” during a recession more in the breach than the observance. Obama, a Democrat, actually implemented their policies, by commission at the Federal level, and by omission at the State level, since he bailed out the banks instead:

Without this hidden austerity program, the economy would look very different. If state and local governments had followed the pattern of the previous two recessions, they would have added 1.4 million to 1.9 million jobs and overall unemployment would be 7.0 to 7.3 percent instead of 8.2 percent.

Anyhow, corporate profits are high and wages are low, so what’s not to like?

2. Why can’t we prosecute the executives of major banks for accounting control fraud? NC readers are thoroughly familiar with WIlliam R. Black’s “accounting control fraud” construct, and Yves has shredded the Obama administration’s refusal to deal with it, so I need not review that material. Instead, I’ll quote William Black from a terrific summary of his speech the MMT conference held recently in Italy:

Call me old school, but I thought, when I was a regulator, if the banks I was regulating were engaged in fraud, first, my job was to stop it. Second, my job was to remove the CEO from office. Third, my job was to help prosecute him and put him in prison. And, fourth, my job was to sue him, so that he walked away with not a lira or a euro or a dollar. But all of that is gone.

3. Why do we have to deliver health care through the private health insurance industry? Here’s the chart: 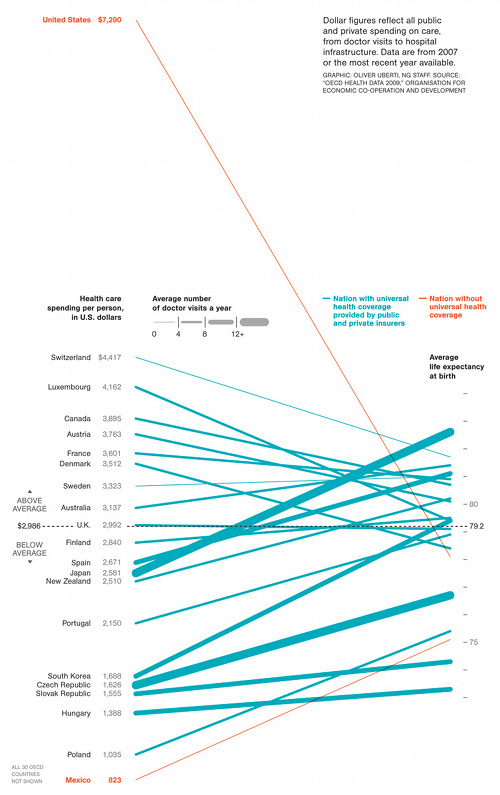 Here at least is one case where American Exceptionalism turns out to be true: The American system of health care is both exceptionally expensive and uniquely lethal. Why can’t we talk about, instead of diverting ourselves by arguing about the misfeatures of a “reform” that mostly kicks in two years from now, and has the main virtue of only throwing some few millions under the bus? And don’t talk to me about meanie Republicans; if the Democrats had wanted to pass real legislation, they would have abolished the filibuster in 2009, when they had the House, the Senate, and a mandate.

4. Why can’t we legalize marijuana? Just for grins, here’s the coverage of last 420 rally in Denver from the Denver Post, and the local NBC and CBS affiliates. Good crowd numbers, from the photos. I guess the legacy parties don’t want their votes, or figure they’ve got no place to go. Here’s Obama mocking legalization proponents on March 26, 2009. Back in “the 100 days,” when the administration cared enough to fake it, they set up a virtual town hall, and asked people to submit questions online, and vote the good ones up. “Some 92,933 people submitted 104,082 questions online, and cast 3.6 million votes to select which ones should be answered.”

“I have to say that there was one question that was voted on that ranked fairly high, and that was whether legalizing marijuana would improve the economy and job creation,” [Obama] said to laughter [from those whose kids will never see the inside of a jail]. “And I don’t know what this says about the online audience, but I just want — I don’t want people to think that — this was a fairly popular question. We want to make sure that it was answered. The answer is, no, I don’t think that is a good strategy to grow our economy.”

I know what it says; it says the online audience has a good sense of public policy.Now, to be fair, marijuana legalization advocates gamed the questionnaire:

“[A] lot of the inquiries that rose to the top of the lists were about legalising cannabis. The top four questions under the heading of ‘financial security’ concerned marijuana and the pot issue was first and third under questions about ‘jobs.'”

But all that shows is that marijuana legalization advocates are determined and energetic. A President who was actually engaged with the electorate would have showed a little humanity and answered the real questjon: Why can’t we legalize marijuana? Instead, Obama got snarky, insulted them, and played to the expensive seats in his White House audience for cheap laughs. Is it any wonder his base — they didn’t have to look up 420 — aren’t enthusiastic this time around? Not that Romney’s any better. He hasn’t attended any 420 rallies. Either.

5. Why can’t we restore the tax brackets of the Eisenhower era? Here they are: 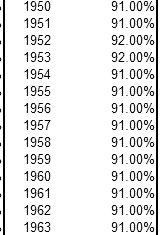 Romney:“What I’m saying is, don’t raise taxes.” Obama: “Ask the wealthy to pay a little more.” A little? Why not a lot? NOTE: I know from MMT that taxes don’t “fund” spending. However, a higher tax rate for the wealthy is good for two other reasons: (1) They can’t use all their loose cash to buy the government, and (2) preventing an aristocracy of inherited wealth is good.

6. Is Obama’s executive power grab different from Bush’s in any way that matters? Remember George W. Bush? The guy who was President before the hope and change hit the fan? |I always thought this story was especially creepy:

We know from Bob Woodward of the Washington Post, for instance, that, after 9/11, Bush kept “his own personal scorecard for the war” in a desk drawer in the Oval Office — photos with brief biographies and personality sketches of leading al-Qaeda figures, whose faces could be satisfyingly crossed out when killed or captured.

One imagines Bush fondling the pages at night. And now for something completely different:

This was the enemy, served up in the latest chart from the intelligence agencies: 15 Qaeda suspects in Yemen with Western ties. The mug shots and brief biographies resembled a high school yearbook layout. Several were Americans. Two were teenagers, including a girl who looked even younger than her 17 years. President Obama, overseeing the regular Tuesday counterterrorism meeting of two dozen security officials in the White House Situation Room, took a moment to study the faces. …. Mr. Obama has placed himself at the helm of a top secret “nominations” process to designate terrorists for kill or capture, of which the capture part has become largely theoretical.

To me, it looks like Obama has rationalized, normalized, and even intensified everything Bush did. Bush is perverse. Obama is banal. Which is worse?

7. Why are we in Afghanistan? The only reasons I can come up with are: (a) we need test subjects for drone development prior to their rollout domestically and (no doubt) subsequent privatization, and/or (b) we don’t want to queer General Petraeus’s pitch in 2016 or 2020. Are those reasons really good enough?

8. Why can’t we talk about anthropogenic climate change? Because skeptics can change their minds:

Call me a converted skeptic. Three years ago I identified problems in previous climate studies that, in my mind, threw doubt on the very existence of global warming. Last year, following an intensive research effort involving a dozen scientists, I concluded that global warming was real and that the prior estimates of the rate of warming were correct. I’m now going a step further: Humans are almost entirely the cause.

I’m setting the bar really low, here. I’m not asking either legacy party to accept that “climate change” is real, let alone — heaven forfend — make any policy proposals. Heck, maybe everything’s fine. But shouldn’t we at least be discussing this? In some national forum? Say, an election?

10. Why can’t we use publicly counted paper ballots for voting? I’ll turn this over to BradBlog:

Last March, the country’s highest court found that secret, computerized vote counting was unconstitutional. Unfortunately, the country was Germany, and the Constitution violated by e-voting systems was the one that the U.S. wrote and insisted Germans ratify as part of their terms of surrender following WWII.

For those who don’t understand how fully observable, precinct-based, Election Night hand-counting of hand-marked paper ballots works, one need look no further than those polling places in New Hampshire where the entire process is a matter of civic pride and community participation. We are not speaking about the centralized, behind-closed-doors, party-boss-counted paper ballots of the days of Boss Daley in Chicago or Landslide Lyndon in Texas.

In short, after polls close, a new, bi-partisan counting crew is typically brought in to relieve tired poll workers at each precinct. Each precinct’s crew counts its own ballots in carefully overseen, publicly observed groups of four – two calling out every vote, two marking each one down – as the citizenry watches, video tapes, and otherwise assures the process is on the up and up. The results are posted publicly before ballots are moved anywhere. They are never out of public oversight until the counting has been completed, which is usually done by enough counting groups to be completed before midnight on Election Night (often before some machine-counted precincts have finished!) It’s a very difficult system to game – at least without being easily caught.

Sounds like counting the votes that way would be festive and convivial. Doesn’t it bother anyone that the results of our elections aren’t “observable”?

11. Why can’t we have a debt jubilee? And I’ll turn this over to Steve Keen:

Michael Hudson’s simple phrase that “Debts that can’t be repaid, won’t be repaid” sums up the economic dilemma of our times. … The only real question we face is not whether we should or should not repay this debt, but how are we going to go about not repaying it?

A Modern Jubilee would create fiat money in the same way as with Quantitative Easing, but would direct that money to the bank accounts of the public with the requirement that the first use of this money would be to reduce debt. Debtors whose debt exceeded their injection would have their debt reduced but not eliminated, while at the other extreme, recipients with no debt would receive a cash injection into their deposit accounts.

The broad effects of a Modern Jubilee would be:

Seems like that would solve the aggregate demand problem. Surely that’s a good thing?

12. Why, oh why, can’t we have a better press corps? Contrast this post with Pravda’s Dan Balz on “8 questions: Topics that will shape the 2012 campaign in the final 100 days.” Here they are:

The very definition of Inside Baseball!

13. Also too: Water, food, epidemics, ZOMG!!! The debt!!!!, the empire, corporate personhood, police state, gun nuts. I could go on. But Bain also too Seamus and tax returns should learn to be an American and a job creator! In reality, Bain should completely disqualify Romney from the Presidency. And Obama’s as American as P.T. Barnum. So there we are. Emergent parties, anyone?

NOTE Oh, what’s a “clang bird”? It’s an anti-pattern in software engineering. Of course, software systems are simple, compared to what we’re dealing with…