Yves here. While Marcy starts with the most obvious misrepresentation in a New York Times hagiography of Michigan governor Rick Snyder, the most troubling parts come later in her post. She illustrates how the Times airbrushes out Synder’s anti-labor, anti-democracy stance.

Granted, it pertains to my right-wing governor, so it’s personal. But this NYT profile of Rick Snyder is a remarkable example of the perverse journalistic fetish for “balance” gone so badly awry it amounts to disinformation.

Let’s start with this summarized claim. 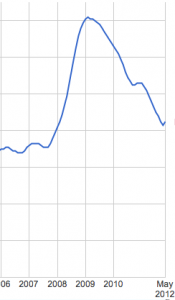 Republicans and business leaders here widely praise Mr. Snyder, crediting him with balancing the state’s once-troubled budget, dumping a state business tax and presiding over an employment rebound in a state that not long ago had the highest jobless rate in the nation. [my emphasis]

You’d think a newspaper might want to point out that MI’s unemployment actually turned around in August 2009–well before Snyder’s election in 2010 and not coincidentally the month after GM came out of bankruptcy. Unemployment dropped 3.3% before Snyder took over, dropped a further 2.6% after he did. But more significantly, unemployment in MI has started to creep up again–it’s up .7% since its recent low in April, to 9%.

Setting that record straight is critical to the rest of the article, since it repeatedly gushes about Rick Snyder refusing to deny Obama credit for MI’s turnaround.

Just before the Republican primary in Michigan in February, Mr. Snyder was asked in an interview whether Mr. Obama ought to be given credit for the state’s economic improvements. “I don’t worry about blame or credit,” he said. “It’s more about solving the problem.”

Nowhere in the article does “reporter” Monica Davey consider the possibility that Obama–and, in fact, Jennifer Granholm–have more to do with the turnaround than Snyder. Yet even many Republicans in this state would grant that the successful bailout of Chrysler and GM had a lot to do with the turnaround (though Republicans almost universally ignore the energy jobs Obama focused on MI).

So maybe Snyder refuses to deny Obama credit because such a claim would not be credible? It’s not a possibility the NYT article–which is supposed to be a celebration of a lack of ideology–even considers.

Which brings me to the other area where NYT’s idea of what constitutes balance is completely whacked: its treatment of the right to organize.

As part of its case that this far right Republican is non-ideological, the NYT points to Snyder’s preference not to have a right-to-work law pushed through the legislature (though concedes that Snyder has stopped short of issuing a veto threat).

Mr. Snyder, a Republican business executive who took office last year after a wave of G.O.P. statehouse victories, has told his Republican-dominated Legislature that a right-to-work measure is not on his agenda. The issue, he says, is too divisive.

And while he has said he prefers that no right-to-work legislation arrives on his desk, he has not said he would veto it.

The NYT doesn’t consider how in two adjoining states–WI and OH–threatening the right to organize mobilized labor against governors in really profound ways. Snyder’s preference not to face the dilemma of vetoing or approving a right to work law probably has as much to do with the political calculation that it would be very difficult to win another statewide election in MI if he antagonized labor. NYT doesn’t consider that; rather, it just labels Snyder’s preference as proof of his lack of ideology.

With that in mind, consider how NYT deals with November’s referenda, which it doesn’t get to until the 23rd paragraph.

Labor leaders have pushed for a ballot question in November to seal collective bargaining rights in the State Constitution, threatening divisions over the very issue that Mr. Snyder had hoped to avoid. Another group is challenging efforts for a new bridge to Canada, a controversial proposal that Mr. Snyder advanced on his own after legislators did not. And another group wants to undo a law granting broad powers to shore up financially troubled cities, a measure that underpins a consent deal the Snyder administration reached for state oversight of struggling Detroit.

Now, first of all, this is the only reference in the article to Snyder’s Emergency Manager law, one of the most radical things he has done in office. That’s particularly stunning given that the NYT celebrates Snyder’s veto of some of the Republican efforts at voter disenfrachisement. With the EM law effectively invalidating elections for Mayor, city council, and school board around the state, Snyder’s law has partially disenfranchised half of MI’s African Americans. And yet the NYT would spin Snyder as a hero of protecting voters’ rights?

Rick Snyder gave businesses in this state tax cuts; to pay for them, he’s cutting public employment. Those very ideological choices may be one of the reasons why unemployment has started to creep up.

In any case, Snyder’s policies have not varied that much from the Republican governors the NYT struggles to differentiate him from. He has just accomplished those policies–gutting unions, disenfranchising people of color, and giving the rich more–via different means.