On September 24, 2012, Josh Lehner published a post comparing employment (jobs) and unemployment rates in and after various financial crises, including Sweden in 1991 and the US in 2008. Lehner concluded that the policy response to the 2008 financial crisis “compares pretty favorably” and that

While the initial path of both the global and U.S. economies in 2008 and 2009 effectively matched the early years of the Great Depression – or worse –the strong policy response employed by nearly all major economies – both monetary and fiscal – helped stop the economic free fall.

This has been used by some to argue erroneously that the Bernanke-Obama-Geithner-Bush-Paulson strategy of bank bailouts effectively proves the Swedish approach of resolving insolvent banks following the 1991 crisis was wrong. What is wrong is this assertion. It ignores Swedish economic history and the limitations of Lehner’s evidence.

I do not pretend to be an expert on Sweden, but the basic facts are not hard to come by. Sweden had a real estate bubble which burst in 1991. Rather than prop up and bailout the affected banks, the Swedish government went in guaranteed deposits (and creditors) and created a bad bank for bad debts with proceeds flowing back to the government. Banks were recapitalized either by the government (in exchange for stock) or by private investors (by issuance of new stock). By 1992, the banking sector had been restored. The rest of the Swedish economy had not. At this point, the Swedish government had options. It had a fiat currency, but instead chose to wastefully and unsuccessfully defend a currency peg, effectively imposing a gold standard on itself. This was at a time when the Swedish welfare state was in full flower. The added social costs from the bursting of the bubble, the bank recapitalizations, and the self-inflicted restraints of its monetary policy created an unsustainable situation. Rather than loosening monetary policy and increasing investment and stimulus, in 1994, the government opted for the neoliberal solution of partially dismantling the welfare state, promoting exports, and tolerating higher levels of unemployment in the name of increased “competitiveness”.

If you look at GDP, this worked out rather well with Sweden outperforming the other Nordics. Of course, GDP is not people. 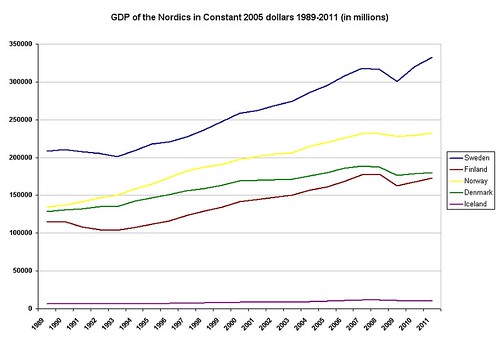 But it shows the weakness of the whole line of thought of those criticizing the Swedish model. They look at only a narrow range of indicators, and those not too closely, and overread their meaning.

So what were these indicators? First, there is employment (jobs):

The point I wish to make here is about the red line representing the US. You will notice a quick turnaround in it, and this is supposed to demonstrate the superiority of the bailout approach. But what all comparisons of jobs to a peak leave out is population growth over the period. It is not enough for jobs to get back to January 2008 levels. As I pointed out in a recent post, the working age population grew by some 10.950 million in the interim. If we use the labor force participation rate for January 2008 (66.2), a by no means stellar rate, we come up with an extra 7.249 million jobs needed for them. This is not reflected in the chart. And needing a job and not having one is probably a more pressing concern in the US (with its high debt levels and poor safety net than it is in Sweden even with its partly dismantled welfare state). Finally and also as I have noted before, there is the issue of the deteriorating quality of American jobs. A chart like this one can not treat quality, but its analysis should.

Reading the chart, it looks like it took about 10 years for the Swedish economy to hit a new, lower jobs level consistent with the prevailing neoliberal philosophy. This was followed by a goosing in the bubble years of the mid to late 2000s. If anyone wants to say that the Swedish model, along with everything else going on at the time, played some role in those first 10 years, I really have not problem with that. I do have one in describing it as the primary driver of events for 17.8 years.

There are several things to say about this. The official U-3 rate of unemployment (people) topped out at 10% in October 2009 and gradually declined to the present level of 8.1%. However, the participation rate changed markedly from its peak in January 2008 of 66.2 to 63.5 in August 2012. As mentioned above, that change represents 7.249 million people. If these were incorporated into the stats, the unemployment rate in August 2012 would 12.2%. As it is, the decline in the unemployment rate in the US has not been because there are fewer unemployed. There are actually 4.899 million more than when the recession began in December 2007. The decrease is an artifact of a job-seeking definition of unemployment and the resulting removal of millions from the labor force. These are people who would work if jobs were available to them. We know this because from 1996 to 2000, the participation rate was .67 or higher. If we take .67 as a measure of where the labor force should be, the real vs. U-3 unemployment picture looks like this: 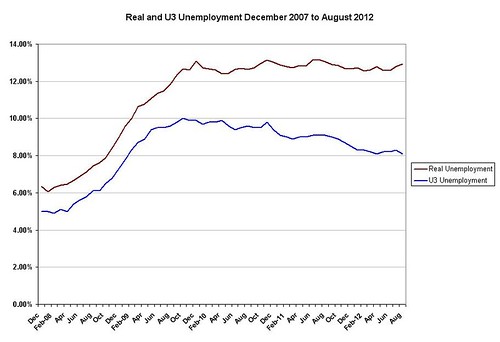 Real unemployment plateaued in September 2009 and has averaged 12.8% since. This is a very different from picture portrayed by the official rate. There are a few other things to consider as well. The US has large armed forces and prison populations and neither of these is counted as part of the labor age population, or non-institutional population over 16.

Looking at the Swedish data, the following is based on harmonized unemployment figures from OECD Stats. 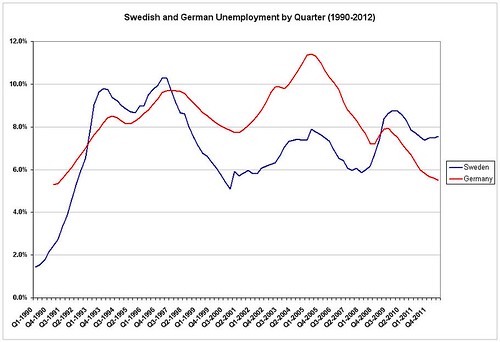 I compared Sweden to Germany because I wanted to show that Sweden does not exist in isolation from its neighbors. The peaks and valleys in the Swedish data, though varying in degree, track with those in the much larger German economy. This argues against the notion that the Swedish model was the principal force behind unemployment in Sweden over a timeframe of some 10-20 years.

Put simply, Lehner’s charts are being misread and overread, and Sweden’s economic history completely ignored. The Swedish model did the job it was designed to do. It fixed the banks, which is a lot more than can be said for what bailouts have done for our banking sector. The Swedish model didn’t create years of economic turmoil in Sweden. That was done by the real estate bubble bursting and the government’s other responses to it. At the same time, Sweden was not immune from the economic ups and downs happening in the rest of Europe and the world.

As for the US, we are up to QE3. Need I say more? The banks remain predatory and broken, and unemployment is improving only because so many are being definitionally “exited” from the labor force and the counts.