Euro Exit by Southern Nations Could Cost 17 Trillion Euros Der Spiegel. So Greece will not be permitted to exit, and will be pounded into something that bears no resemblance to a civilized society.

Turkey-Syria on the Brink of War OilPrice. This is a workmanlike overview; I’m sure NC readers can add to the discussion in comments.

El-Erian Cautions Romney on China Stance Bloomberg. I’m surprised there wasn’t more reaction to this in the media commentary. But I assume most political observers see this an empty promise. Plus as many commentators have pointed out, the renminbi just isn’t that undervalued any more, see Against a Sea of Enemies: China as Currency Manipulator, Menzie Chinn, Econbrowser

Congressman and Chairman of the House’s Homeland Security Committee: Terrorist Threat Worse Now than Before 9/11 George Washington. Well, of course security threats are worse! We are within weeks of an election!

Mind The Binder ThePhoenix. The real backstory of those binders.

Ahead of gay marriage votes, advocates skeptical of polling Reuters (Carol B). Not sure I buy this. The people that I’ve run into who oppose gay marriage are awfully unabashed in saying so. Bigger point is survey results of any kind are very sensitive to how the question is phrased, so “Do you favor/oppose gay marriage?” is most assuredly NOT the same question as “Will you vote for/against Proposition XYZ [which legalizes gay marriage]?”.

Scott’s Story and the Election Nicholas Kristof, New York Times (furzy mouse). What is going on in our society? Is this just more organized trolling, the Internet version of brownshirts, or is there a real decay in the zeitgeist? Boy, do I wish I’d been able to get permanent residence in Oz….

Well, I got a job and tried to put my money away

But I got debts that no honest man can pay. —Bruce Springsteen, Atlantic City

CO. Marijuana legalization: “[Gary] Johnson’s supporters are deftly leveraging all hoopla around the marijuana initiative to sharpen their candidate’s appeal and message to disaffected Democrats. Is this a brilliant GOP conspiracy theory? In other words, is the libertarian candidate deliberately trying to help Romney, as Obama partisans will no doubt grouse? Almost certainly not, as Johnson is no fan of Romney. Nobody should be surprised that having been betrayed, many of those D-leaning voters who supported Obama in 2008 specifically because of his position on the Drug War may look for an alternative in 2012.” (David Sirorta; MA).

IA. Food: “Outbursts of ‘you guys are cowards,’ ‘tin soldiers,’ and ‘corporate shills’ were shouted from nearly 30 Iowa Citizens for Community Improvement (CCI) members who appealed for the EPC to prevent large-scale commercial livestock operations from applying liquid swine manure on land where the current crop has been harvested and will be planted to soybeans during the next crop season.” …. Buyer’s remorse: “A full-page Romney campaign ad in today’s Cedar Rapids Gazette takes the form of an open letter from 13 Iowans who say they voted for President Barack Obama in 2008 but regret their choice and won’t do so again in 2012.” Ouch!

LA. Oil: “About 565,000 pounds of oiled material from the Deepwater Horizon spill was brought to the surface by Hurricane Isaac, more than had been collected in eight months before the storm, the state’s coastal protection agency said Wednesday. Overall, about 4.9 million barrels of oil spilled into the gulf during the Deepwater Horizon disaster and 1 million barrels are still unaccounted for.” (Apparently, a barrel of oil is around 300 pounds.)=

ME. Ladies of negotiable affection: “Police say [Mark Strong, the man accused of booking clients at the Pura Vida Studio owned by Wright[ helped run Wright’s alleged side prostitution business and helped video-tape her clients. Prosecutors say they have 100 hours of video evidence.” IIRC, solicitation is a misdemeanor. Is blackmail a felony? … Ladies of negotiable affection: “Three police detectives are working full time going through the evidence seized in the investigation of an alleged prostitution business, with the probe expected to continue for a few more months, increasing the overtime expense for the town.” …. Corruption: “[Stephen Bowen, ME’s education commissioner,] was preparing an aggressive reform [sic] drive to dramatically expand and deregulate online education in ME. ‘I have no ‘political’ staff who I can work with to move this stuff through the process,’ he emailed [Patricia Levesque]. Levesque replied [that FL Gov. Jeb Bush’s Foundation for Excellence in Education] would be happy to suggest policies, write laws and gubernatorial decrees, and develop strategies to ensure they were implemented.”

NC. Swing states: “However, Obama has not stepped foot in the state since his convention drew to a close nearly six weeks ago. After he touches down in IA and NH this week, every other battleground state will have gotten some in-person Obama post-convention love except for the Tar Heel state.”

NY. Fracking: A New York coalition, the landowner Advocates of New York, is scheduling a pro-drilling rally on Oct. 15 in Albany. It is being supported by the 77,000-member Joint Landowners Coalition of NY.” (Cf. NC 2012-10-16. I wondered who printed those T-shirts…. More, much more.) … Fracking: “[Kirsten] Gillibrand, a former congresswoman seeking her first full-term in the U.S. Senate, said hydrofracking should not be allowed until chemicals used in the drilling process are disclosed and studied for health effects, lest they find their way into drinking water supplies. She also said plans must be in place for dealing with wastewater, which may become naturally irradiated, and sealing abandoned wells.” … Police state: “If you’re told to do something, do it without asking the reason” (video).

OH. Fracking: “[Youngstown City Councillor Annie] Gillam says the city has four thousand acres of land and is looking at leasing a tenth of that; which would raise two-to-three million dollars. ‘People are getting around $5-thousand an acre; but it could be more. I understand some Utica shale deposits are getting close to eight thousand.'” Well, I’m sure that covers the externalities! … Early voting: “The state’s elections chief says close to 407,000 Ohioans have already voted in the key presidential battleground.”

TX. Pipelines: “‘This is not about the money,’ said [Julia Trigg Crawford], who notes that TransCanada’s final offer of $20,000 amounts to less than $1 a day over 60 years, less time than her family has been on the land. ‘This is about the right of a landowner to control what happens on their land.”

WY. Coal: University of Wyoming officials sped up the removal of a controversial anti-coal sculpture because of the furor it caused [with angry state legislators, energy industry donors and trade group representatives], but chose to tell the public the removal was as scheduled and because of water damage, emails show.” Well, no harm done. I’m sure the public assumed the university administrators were lying anyhow.

Outside baseball. Fracking: “[Hearst Media banned] all comments using the word fracking [which] effectively prevents a large segment of the populace from exercising their First Amendment right. That is convenient for industry.” … Food stamps: “Calculating someone’s eligibility for food assistance takes into consideration many factors: income, medical expenses, utility costs and other amounts. For the first time in many years federal government opted to change that utility deduction. So for many people, that means they’ll get about $35 less a month, starting in November.” Because socialism!

The trail. Gaslighting: “A suspected terrorist parked a van packed with what he thought* was a 1,000-pound bomb next to the Federal Reserve building in Lower Manhattan and tried to detonate it Wednesday morning before he was arrested in a terror sting operation, authorities said. [* No doubt because his Stasi handlers told him that.”] … Walmart moms: “‘Some of the points he was making, I had to compare to the last four years,’ one woman said. ‘We had a lot of hope, but I was left thinking, ‘Hmm, I’m not sure the next four years are going to be much different.’ ‘I was actually comforted,’ another woman elaborated. ‘Obama knows what went wrong, and he kind of knows how to fix it.'” “Actually…” …. White males undecideds: “‘I’ve been online checking them out, and I honestly think they both suck. They’ll lie to get your vote,’ [Larry Bushnell] said.” … Losing the political class: Check out this photo. You see photos like this of Romney all the time; very rarely of Obama. … Polls: “Obama’s chances of winning the Electoral College were 64.8% as of Tuesday‘s FiveThirtyEight forecast, down slightly from 66.0% on Monday. The forecast will not yet reflect any effects from Tuesday night’s debate.” (Nate Silver).

Obama vs. Romney II. Romney to Jeremy: “When you come out in 2014 — I presume I’m going to be president — I’m going to make sure you get a job. (Chuckles.) Thanks, Jeremy. Yeah, you bet.” Empathy! … Obama to Jeremy: “Now, does that mean you are not struggling? Absolutely not.” Empathy! … Jeremy speaks: “‘No, I think I made a decision,’ he said. Epstein declined to reveal which candidate will be getting his vote.” Ha. … Video: Horses vs. protesters at Hoftra (DCBlogger). Word of the day: Fleague. … Memes: “Binders full of women” #3 of “Top 4 Rising Search Terms” during the debate, says Google. … Memes: “A woman leading an opposition party was handcuffed to a chair for crashing the rich people’s debate but BIIIIIIINDERS!” … Memes: “On this empty binder issue, it’s the president who has the empty binder …” Na ga happen. … Memes: “Whether such Internet memes have any effect on how people will vote is unclear, but there’s no doubt the online buzz will ensure Romney’s off-the-cuff remark continues to be a topic for water-cooler discussions in the aftermath of the debate.” … Undecided voters: “One of the stupider things that people say about undecided voters is that they’re stupid. But although they may follow politics less closely than other voters, they’re not somehow devoid of values, beliefs, and attitudes that bear directly on politics. So we shouldn’t be surprised that last night’s questions were something more than anodyne, and may have reflected honest and meaningful opinions” (more). … Undecided voters: “But what voters in the room made of it is anyone’s guess. They managed to get in only about half as many questions as Crowley had predicted, and in the end neither of the candidates seemed to be paying much attention to any of them.” … Media critique: “[W]hoever coached the Governor clearly did not look at the transcripts from September 12, where the president said: ‘No acts of terror will ever shake the resolve of this great nation, alter that character, or eclipse the light of the values that we stand for. Today, we mourn four more Americans who represent the very best of the United States of America. We will not waver in our commitment to see that justice is done for this terrible act.'” Well, I read the transcript and — to be fair, in typically mushy and prolix Obama fashion — the paragraph Al Jazeera quoted is nine paragraphs away from the point at the beginning where Obama called the Libyan embassy “an attack” (and not, as he easily might have done, “an act of terrorism.” So Obama sure buried the lead. Pretty odd! (Goddard disagrees. Get the transcript. If nine paragraphs between “attack” and “terror” doesn’t do it for you, how about ~550 words?) To me, the whole episode (just like the binder flap) looks a lot more like the narrators in the political class giving Obama a collective reach-around than anything else. Not that there’s anything wrong with that.

The Romney. One big company town: “[ROMNEY:] whether you agree with me or you agree with President Obama, or whatever your political view, I hope, I hope you pass those along to your employees.”

* Slogan of the day: I Love The Blue Sky of The Homeland!

Antidote du jour (furzy mouse). This is a Red-shanked Douc Langur. If you are really nice, I might put up the pix that show the red shanks: 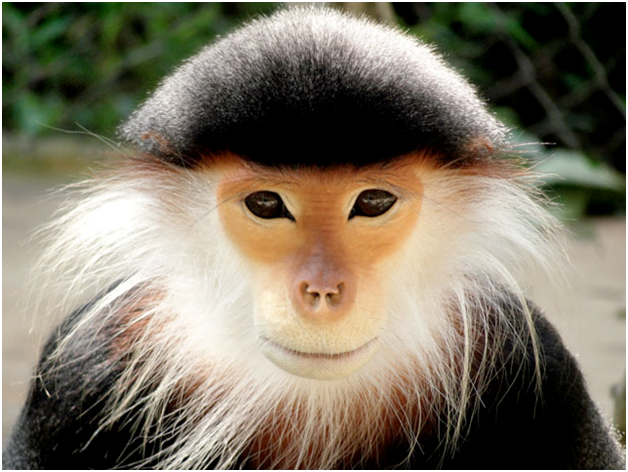