The starting point for systemic risk analysis for a single-country is typically the banking system1. A systemic risk analysis involves the use of disaggregated national bank data, including information on the composition of banks’ asset and liabilities, maturity and currency mismatches, and other balance sheet and income metrics. These national-based analyses then attempt to capture systemic risks stemming from common exposures, interbank linkages, funding concentrations, and other factors that may have a bearing on banks’ income, liquidity and capital adequacy conditions. Examples of such quantitative approaches are Boss et al (2006) for Austria and Alessandri et al (2009) for the UK.

Extending analysis to multi-country level – or not

Our approach, highlighted in Cerutti, Claessens and McGuire (2011) does not, however, directly extend to the multi-country level for a number of reasons:

International financial linkages, by definition, involve more than one legal jurisdiction. For various reasons (legal framework, accountability to parliaments and taxpayers, etc.), policy makers tend to focus on national objectives. In addition, supervision of large, internationally-active financial institutions is often dispersed among agencies in many countries, with imperfect sharing of information and limited tools to coordinate remedial actions. Moreover, a global framework for the resolution of these institutions is lacking2. There is also no formal lender of last resort to address liquidity problems in foreign currencies3.

Supervisors in each jurisdiction have access to granular data for banks operating in their jurisdiction. However, the supervision of internationally active institutions relies on data collection practices that tend to differ across jurisdictions. Moreover, confidentiality concerns generally restrict the sharing of data, even within the supervisory community.

Existing data sources and their weaknesses

As the global financial crisis has made clear, despite the difficulties of the data and some institutional challenges, analysing systemic risks in international banking is nevertheless an activity with high rewards. What existing data can be used and brought to bear on this issue? To start, it is important to note that tracking global systemic risks requires the joint analysis of data covering many financial institutions. Common exposures to a particular asset class or funding source are easily masked in aggregate data. To detect vulnerabilities requires data at the individual bank-level, collected in a consistent and comparable format, so that aggregation is possible.

But the experience during the crisis showed that, in many jurisdictions, supervisors lacked critical pieces of information, specifically, data on how international banks are connected to each other. During periods of market turmoil, real-time information on how the failure (or not) of a particular institution might impact other institutions is crucial for policy decisions, but was lacking in the days leading up to the collapse of Lehman Brothers. Thus, for crisis management purposes, there is a need for more information on bank-level bilateral linkages.

No single supervisor therefore has a comprehensive, yet detailed overview of the global system. And without such a view, system-level vulnerabilities can go undetected. It was difficult (even late in the crisis), for example, to gauge the size of European banks’ global exposures to US dollar centralised debt obligations, and there was virtually no system-level information on the scale of these banks’ reliance on short-term dollar funding (e.g. money market funds), which dried up suddenly amidst the turmoil. Detecting these types of stresses early on requires detailed breakdowns of banks’ assets and liabilities (i.e. by currency, instrument, residual maturity and, if possible, counterparty type and country), and their joint analysis across many banks.

Commercial databases compile information from banks’ annual reports, but have considerable data lags and gaps. Information on the counterparty-sector and country are generally missing, and coverage of branches is particularly poor. In many countries, standard balance sheet data (e.g. capital asset ratios) are not even publicly disclosed — or are disclosed without much detail.

In Cerutti, Claessens, and McGuire (2011), we provide some examples of how certain types of global systemic risk analysis can be assessed with data that is currently available.

The Bank for International Settlements (BIS) consolidated banking statistics are one of the few sources of information on the extent to which borrowers in a country rely on credit from a particular consolidated banking system. However, because these data were not designed with the borrower’s perspective in mind, they overestimate reliance on a particular national banking system in cases where at least part of the banking system’s funding comes from sources in the borrower country. Combining these BIS data with bank-level data helps to illustrate the scale of the problem. The differences between the gross BIS foreign claims and the rollover exposure figures tend to be large for emerging market borrowers.5 For example, Figure 1 shows that the adjusted measure for Latin-America – in red circles – is on average only 45% of banks’ foreign claims.

Figure 1 Rollover exposure as of March 2012 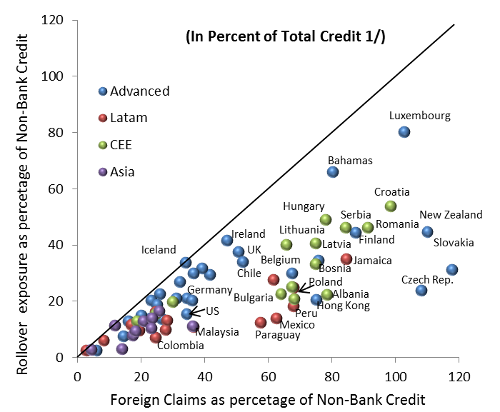 In the run-up to the crisis, many European and other non-US banks invested heavily in US dollar-denominated assets, and increasingly relied on short-term US dollar funding in the form of direct interbank borrowing and the swapping of euros and other currencies for dollars. While imprecise, BIS data help to illustrate the size of the problem since they provide some indirect information on non-US banks’ dollar funding needs in the run-up to the crisis. Figure 2 suggests a growing risk of funding problems prior to the crisis, as longer-term investments in non-banks became increasingly dependent on short-term foreign currency funding. By these estimates, large European banks depended on some $1 trillion in short-term funding on the eve of the crisis, much of it obtained via foreign exchange swaps.

These examples show the value of existing data for global systemic risk analysis. At the same time, they illustrate that most types of analysis still rest on a myriad of tenable assumptions and thus yield imprecise results.

How to improve the data

To improve quality and availability of data, the IMF and the Financial Stability Board (FSB) have jointly issued a report to the G20 finance ministers and central bank governors with recommendations that include the creation of a common reporting template for globally systemically important financial institutions (G SIFIs). An international working group has already produced a set of draft data templates designed to capture detailed information about banks’ asset and funding positions, and on the linkages between banks and other individual institutions (see IMF-FSB, 2011). As these initiatives go forward, the resulting data would greatly improve analyses (see IMF-FSB, 2011 for details). In parallel with these efforts, enhancements to the aggregate BIS international banking statistics, which cover a much wider universe of banks, are underway6.

Even with improved aggregate banking statistics and better bank-level data, other dimensions of systemic risk will likely remain inadequately covered. While better coverage of banks is a top priority, non-banks, including pension funds, insurance companies and large multinational corporations, can also be systemically important. This suggests going forward including not only such non-bank institutions in the counterparty sector breakdown of banks’ exposures, but also bringing large non-bank firms under the data gathering umbrella.

Authors’ note: The views expressed here are those of the authors and should not be attributed to the IMF or the BIS, or their respective Executive Directors or Management.

Borio, C and M Drehmann (2009), “Towards an operational framework for financial stability: ‘fuzzy’ measurement and its consequences”, BIS Working Paper, 284.

Fender, I and P McGuire (2010), “Bank Structure, Funding Risk and the Transmission of Shocks Across Countries: Concepts and Measurement”, BIS Quarterly Review, 63-79, September.

1 Attention to systemic risk assessment and contagion has dramatically increased with the global financial crisis, although a precise definition of systemic risk is still lacking. See Borio and Drehmann (2009) and Kaufman and Scott (2003) for a discussion of the definition, and de Bandt et al (2009) for a recent literature survey.

3 A domestic central bank can supply liquidity in its domestic currency. But liquidity provision in foreign currencies is limited by the available foreign exchange reserves or borrowing capacity of the central bank.

4 Access to supervisory data is limited outside the home country. In some cases Memorandums of Understanding allow specific data to be exchanged between two countries. Also, in some cases, data are made available to teams conducting the joint IMF-World Bank Financial Sector Assessment Program (FSAP).

6 See BIS (2011), Cecchetti et al (2010) and Fender and McGuire (2010) for a discussion of how well-designed aggregate statistics can enhance the monitoring of systemic risks, and for more detailed discussion on the structure of banks’ international operations as revealed in the BIS banking statistics.

Lambert here: B-but professor, if banking were boring, we wouldn’t need nearly so much data, would we?