1. A Parable About the Origin of Money

Perhaps the most convincing single example cited by proponents of the view that money is a commodity is the well-known use of cigarettes as “money” by Allied prisoners of war in Germany during World War II. Just six months after being liberated by the U.S. Army, former POW R.A. Radford published his famous article in the journal Economica, “The Economic Organization of a P.O.W. Camp,” describing how he and his compatriots had used cigarettes as a medium of exchange during their unpleasant stay at their not-so-idyllic Bavarian Stalag.

But as we will see below, there are some significant problems with the notion that cigarettes were really a form of commodity money which developed spontaneously in the way commodity money theorists suggest. In fairness to Radford himself, he recognized that “prison camp is not to be compared with the seething crowd of higglers in a street market, any more than it is to be compared with the economic inertia of a family dinner table.” But, as is often the case in economics, subsequent interpreters tend to underemphasize such subtle points as this. For example, in the view of prominent Austrian economist Robert P. Murphy, “there is nothing in Radford’s account that conflicts with the standard economists’ story about the origin of money.”

An identification tag worn by a POW from Radford’s very own Kriegsgefangenen-Mannschafts-Stammlager VII-A: 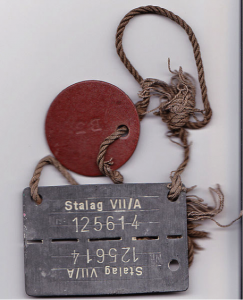 Radford’s article became an instant classic, and has since become a staple of introductory economics textbooks, with excerpts serving as a real-world illustration of the standard textbook fairy tale about how money arose. The trouble is that the fairy tale is not terribly convincing on its own terms, as we shall see in the next paragraph. Though Radford’s POW camp is not the center point of the commodity money argument (gold is), it makes for a pithy and compelling archetype which makes the commodity money narrative much more convincing for students.

The traditional fairy tale goes something vaguely like this: once upon a time, in a faraway land, there lived a princess, some peasants, and perhaps also a frog. The princess wanted various commodities, such as a quality comb and some food to eat, and the peasants wanted locks of the princess’ hair (as well as various commodities produced by other peasants). The princess’ hair had many desirable properties. First, it was uniform; second, it was transportable; third, it was divisible; fourth, and perhaps most importantly, it was shiny. The princess, of course, as the issuer of the locks of hair, became very wealthy. And that is how we got castles and expensive towers. But eventually the princess could not re-grow locks of hair quickly enough to cut them and package them into a sufficient number of locks to meet demand from the peasants and the frog, and so everyone began using gold instead. And then everyone lived happily ever after – especially the princess, who was as we have mentioned very wealthy.

Although cigarettes are not really durable, they had some other characteristics necessary for a usable exchange currency, such as relative uniformity, desirability, and light weight. Most captured American soldiers were addicted to nicotine (thanks to the free cigarettes provided to soldiers courtesy of America’s tobacco companies, who surely had only the troops’ best interests at heart as they provided them with the opportunity to develop a life-long substance abuse habit).

Support our troops: make them chemically dependent on our products! According to the website “The Cigarette Camps,” the American Tobacco Co.’s 1942 “Lucky Strike Green Has Gone to War” advertising campaign increased sales by 38%.

In addition, cigarette-money had an additional feature to make it attractive to those who spend their days worrying about the ever-present phantom of hyperinflation: every time a prisoner smoked a cigarette, that cigarette was necessarily destroyed and the cigarette-supply was thereby reduced, thus ensuring that the quantity of cigarettes could not increase too rapidly. Similarly to Bitcoin, cigarettes were thus a naturally deflationary currency.

3. The POW Cigarette Economy as a “Pure Exchange” Economy

In a sense, it is strange that commodity money theorists would place so much weight on such an artificial case study. After all, the case of a band of brothers – who periodically receive cigarettes and other commodities which rain down exogenously like manna from heaven – is not exactly the most typical way that human beings have lived throughout history (not to mention the fact that they were locked up together in the midst of the most deadly and destructive war of all time).

But in another sense, it is not so strange at all. The artificial situation of a prisoner of war camp actually resembles a theoretical Walrasian exchange economy much more clearly than does the real world economy. In a prisoner of war camp, as in the theory of a pure exchange economy, there is absolutely no production of goods (at least for those fortunate enough to be incarcerated in genuine POW camps, as opposed to work camps or concentration camps).

Goods are simply given to the prisoners by their benevolent (or not-so-benevolent) warden overlord, and then the prisoners must confront the problem of how to trade the goods among themselves so as to ensure that they will be as satisfied as they can possibly be with the set of goods that they will eventually consume. POWs all received more or less the same allocation of Red Cross rations, but different POWs had different preferences. Some preferred chocolate; others preferred jam. And so they traded! And after a month’s time, cigarettes “rose from the status of a normal commodity to that of currency,” and POWs began calculating the prices of other commodities in terms of cigarettes.

Moreover, because all prisoners started off with the same allocation of rations, Radford’s POW camp was something of an egalitarian society, and hence was also a just world (excepting for the arbitrary power of the guards). In other words, the prisoners could trade a fixed quantity of commodities with a fixed initial distribution to maximize their subjective personal “utility.” It was Say’s Economy in action!

So even if we are skeptical of the idea that the actual real world economy resembles a pure exchange economy in which people use money only because it is a bit more convenient than outright barter, it might seem that we must admit that the resemblance between commodity money theory and observation is much clearer in the case of the POW camp than in the standard commodity money creation myth.

Furthermore, all of this involved no government intervention, but rather a market emerged as the result of spontaneous self-organization by the POWs! Or so it might seem…

But unfortunately for our commodity money theorists, the POW camp story is almost as much of a fairy tale as is the tall tale of The Princess and The Hair. If the economic theory of “pure” exchange is purely anything, then it is purely mistaken.

As Christine Desan explains in her article, “Coin Reconsidered: The Political Alchemy of Commodity Money”, Radford’s story “capture a powerful intuition about money’s origins and its character that continues to anchor assumptions about the market.” That “most of that history is imagined and modeled rather than mapped” only makes it more compelling. That this story was a chimera seems somehow to be outweighed by the fact that it was a shared daydream – common among (apparently almost) everyone from Menger to Marx.

The more closely we examine Radford’s fable, the less convincing it becomes. As Desan reminds us:

There is a problem with the paradise presented… (in Radford’s account)… and the problem is critical. That ‘brand new society’ — with its cigarette currency and its pristine market — was a POW camp.

Far from being a stateless society or a paradise of market individualism, Radford’s POW camp was in fact… a POW camp. And that is not something we should allow ourselves to easily forget. There was a “state,” and for that matter the “state” (the German guards) was all-powerful. It was possible for the “market economy” to emerge because and only because the guards and the Red Cross established and preserved the conditions to enable it to emerge. Cigarettes and other commodities were – because of decisions by the Red Cross and the Germans which lay entirely outside of the control of the prisoners – delivered from a distant and utterly disconnected external world:

Recognizing that fact subverts the meaning of the microcosm. The condition for the function of its market and its money was a situation in which governance and all the functions of the collective had been externalized and determined by an alien power. Note that centralized authority was not absent; rather, it was omnipresent, fixed, and definitive. The structure that determined Radford’s camp thus established as premises precisely those issues of relative value that are negotiated collectively when a community of users itself creates a currency — and, for that matter, a market. Those issues range from the profound to the apparently mundane. Each connects a society’s constitution, as a dynamic of people interacting, to its money, as the mode they use together and as individuals to mark and transfer value.

This was only possible because:

The prisoners had no need to create and pay for the conditions that premised their everyday exchanges, from the guards to the way they were fed, because others had conclusively done so for them… Just as they had no say in creating the conditions for exchange, the prisoners had no involvement in determining the reach of each prisoner over resources relative to their group, there in a context that dictated the quantum of sustenance and shelter, removed freedom, and made labor extraneous.

Less jarring criticisms can also be made. For one, the American POWs had all grown up in a money-using society. They thus did not invent money from scratch, but rather attempted to re-create what they already knew – a much different challenge than the one of creating money in the first place that would have confronted a hypothetical tribe of Lockean noble savages, according to the commodity money fairy tale.

Another difficulty Desan points out is that “cigarettes may also have been the only item that German guards reliably accepted as bribes, giving them unique appeal.” It being necessary for POWs to periodically bribe guards for various reasons, the bribes in effect operated precisely like taxes or fees, collected by the powers that be – in this case the guards. Thus, “in the end, outsiders effectively customized a currency for the POWs and bore its costs.“

“Frank was eventually to say that general equilibrium’s major contribution was a negative one: to make precise the conditions that had to hold (for what he perceived to be Adam Smith’s conjecture that greedy people in a competitive environment could bring about a sort of social optimum) were so special that they robbed general equilibrium of any significant role in descriptive analysis.”

We might say something similar about Radford’s prison camp: it makes the negative contribution of illustrating the sorts of extreme conditions which must hold if the commodity money origination story is to be dressed up in the garb of something that vaguely looks like a documented theory.

No doubt commodity money theorists do not advocate locking everyone up in prison camps (nor do I!). However, commodity money theorists are presented with an awkward and unforgiving realization: if we all lived our daily lives in Prisoner of War camps, and if we were all well-supplied with regularly scheduled deliveries of addictive chemical substances, then perhaps the theory might be a bit closer to being correct.

The alternative option would be as unlikely as it is unthinkable: adopting an altogether different theory of the origin of money, for which there is actually supporting historical evidence (some of which Desan recounts in the rest of her paper, for interested readers).