As is par for the course, the financial media is telling a story about a major US company from the perspective of the investing classes, rather than the broader public.

The poster child is the New York Times’ Dealbook, in a story titled “To Satisfy Its Investors, Cash-Rich Apple Borrows Money.” Its third paragraph reads:

Apple’s return to the debt markets raises a riddle: Why would a company with so much cash even bother to issue debt?

A full seven paragraphs later, the article gets around to the last, and arguably the most important reason:

By raising cheap debt for the shareholder payout, Apple also avoids a potentially big tax hit. About two-thirds of Apple’s cash — about $102 billion — sits overseas in lower-tax jurisdictions. If it returned some of that cash to the United States to reward its investors, it could have significant tax consequences for the company. In some ways, the bond issue is a response to that tax situation.

“In some ways” is an understatement. A simple Google search shows stories going back several years of how Apple has been pushing for a tax holiday so it can repatriate its overseas stash. One example is a February 2011 report from electronista, Demands come despite federal budgetary crisis:

A variety of technology corporations are among those pressuring the US government to give them a preferential tax break, sources tell Fortune. Apple, Cisco, Pfizer and Duke Energy are specifically named as lobbying politicians for a tax “holiday” in regards to repatriated cash. Whereas the companies would normally be obligated to pay 35 percent, their goal is allegedly to pay just 5 percent.

A 2012 story from United Republic focuses on Apple:

According to the Center for Responsive Politics, Apple spent $2.3 million on lobbying last year and its lobbying expenditures have been steadily increasing over the past decade – in 2000, it only spent $360,000 on lobbying.

A big chunk of this is spent lobbying on tax policy, especially repatriation legislation, which would let firms bring profits held overseas back to the United States at a cheaper tax rate. One bill in particular, the Freedom to Invest Act of 2011, would save companies like Apple, Google, and Cisco $78.7 billion, paid for by the American people.

This so-called tax holiday would let multinationals with more than $1 billion held abroad bring that cash back to the United States at a 5.25 percent tax rate, instead of the typical 35 percent top corporate rate. The idea is that those companies would pump that money into the American economy, especially through hiring workers.

Apple currently keeps about two-thirds of its $97.6 billion in profits abroad.

Bloomberg reported last fall that Apple and other companies have employed an army of over 160 lobbyists to persuade Congress to pass the Freedom to Invest Act of 2011. And these weren’t any old lobbyists. Sixty of them once worked for a sitting member of the House or Senate. And one in particular, Jeffrey Forbes, was once chief of staff to Sen. Max Baucus (D-Mont.). Baucus is the chairman of the Senate Finance Committee, which has direct jurisdiction over tax law.

This sort of chummy influence-peddling on behalf of the Freedom to Invest Act isn’t supporting good policy. How do we know that? Because Congress already passed legislation exactly like it, back in 2004. And as a recent Senate report found, it didn’t go so well:

A report from the Senate’s Governmental Affair’s Permanent Subcommittee on Investigations found that a 2004 tax break that was given to corporations repatriating profits made in foreign countries “did not produce any of the promised benefits of new jobs or increased research expenditures to spur economic growth.” In fact, the report found that the corporations receiving the break cut 20,000 net jobs and cost the U.S. Treasury $3.3 billion in lost revenue over 10 years.

At least in the UK, where the UK Uncut movement against corporate tax avoidance has staged some large protests, the officialdom has managed to get some of the big foreign tax avoiders to pony up some dough out of embarrassment. But big offender Apple is not among them. As the Telegraph noted last December, in Apple shelters almost $1bn a week from US tax man:

Technology giant Apple shuttled $11bn (£7bn) into offshore tax havens in the fourth quarter of 2012, an analysis of its corporate filings has revealed.

The iPad maker has slashed its tax bill by paying less than 2pc on its overseas profits, as it moves money through offshoots in low-tax countries such as the British Virgin Islands….

Starbucks took an unprecedented step of pledging to pay £20m corporation tax in the UK, after it came under fire for paying nothing last year despite making sales of £398m. 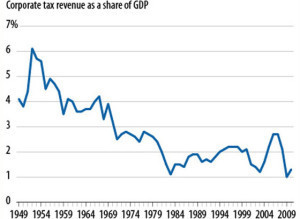 Oh, and spare us any blather about “taxing corporations is unfair because those poor investors would be taxed twice.” Everyone is taxed multiple times, so stop running the con that investors deserve to be a protected class. Workers pay FICA and income taxes, so sales tax payments come out of income that has been previously taxed. You also pay the real estate taxes of store owners when you buy goods or eat out. You pay the gas taxes on the shipping costs of products you buy online (again out of your after tax dollars!)

And let’s also not forget that growth rates were higher when corporations were more heavily taxed, dispelling the notion that making corporations pay their fair share is a negative for the economy.

But thanks to the tender ministrations of the Fed, which is goosing asset prices right and left in a futile effort to pump of the economy, Apple has a cheap and easy way out of the fact that its clever tax avoidance leaves its monster cache largely overseas, where it can’t buy the good will of increasingly jaded US investors. Its $17 billion of bond offerings Tuesday were a blowout. And that’s despite the fact that they didn’t garner an AAA rating. That view may as much reflect rating agency doubts that Apple will ever get the tax breaks it wants to bring its dough into the US on the cheap as well as concerns about how long the Cupertino company can keep its cachet and the premium margins that result.

But let’s not look too hard under that hood. What’s good for corporate icons has to be good for America, right?