Loyal Dems were over the moon with reports from California that the costs provided by insurers of various levels of plans on state exchanges were coming in under CBO estimates, as well as below prices on the current small-group market. The early huzzahs survived an effort to claim otherwise by Avik Roy at Forbes; his creative footwork with numbers was shredded in the blogosphere (although still curiously repeated by Reuters).

A bit more serious challenge to claims of early success on the cost front comes from Ohio, where Republican officials brayed that premium increases next year would average 88%. The analysis appears a bit sus, since it included some pretty crappy plans in the baseline. But while more detached commentators weren’t happy with how Ohio officials ran the numbers, they didn’t appear able to debunk the idea that costs would be higher for most people than before, even though the higher costs might indeed result from plans providing more comprehensive coverage.

One big issue is that the Republican-led states are doing a good job of throwing sand in the gears of implementation, which means it’s likely that consumers there will indeed have reason to be less satisfied. These states have refused to implement state health exchanges, throwing the task on the Federal government, and also nixing Medicaid program expansion, which will leave a lot of low-income people out in the cold.

But reader martha r has been poking around the information in her state, Vermont, which is now being touted for coming in with lower-than-anticipated cost forecasts, like California. But the plans don’t strike her as affordable for locals. She writes:

Newly up on the website for the Vermont implementation of ACA:
http://healthconnect.vermont.gov/tax_credit_calculator

I’ve queried them on whether one should enter one’s gross or net income. But you can play with different numbers and see how it comes out.

A not at all uncommon salary among my neighbors–I live in a condo community with many single women living alone, social workers, teachers, nonprofit directors, and the like– in this area is $35K.

That may seem shockingly low, and for many it is not tenable, so after they try to make a go of it in Vermont they decide to leave and seek better paying work elsewhere.

But for the hard core who get Vermont into their blood and can’t bring themselves to leave, this low a salary is not at all unusual. Hopefully, one also has benefits–but not always.

So you might try entering $35 or $40 or $45K and see what these lower-middle income people are going to get. 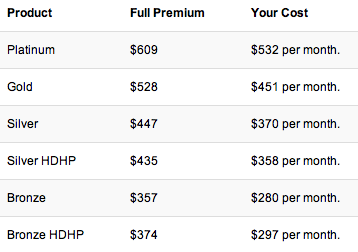 For a single person, at S46K gross on a salary (not self-employed with a home office deduction and the like), or $3833 per month before taxes, who can afford $370 per month? Perhaps those who have paid off their mortgages or nearly so?

I admittedly only have a personal datapoint, but in New York, which has to be a higher cost state, my current plan is a bit better than silver (plus I have some very valuable features, like coverage anywhere in the world, plus no network or primary physician gatekeeping, and external appeal to New York State) and my costs are markedly lower than the silver plan cost in Vermont. And I’m over 50.

A new article by Karen Higgens at Alternet gives some other reasons why the cheerleading is overdone. For instance:

Wellness” programs that enable businesses to transfer more healthcare costs to workers with “unhealthy” factors like smoking or high blood pressure or cholesterol levels are rapidly spreading, actively encouraged by the ACA which offers premium discounts to participating employees. However, health disorders are as likely to derive from chronic or genetic conditions as “life style choices” and economic factors which have a disproportionate impact on the poor. The cost reductions also fall far short of the hype. The federal government apparently buried a report it mandated for the ACA from the Rand Corporation on wellness programs which showed the overall savings are, at best, modest. The programs make insurance unaffordable for some workers, and “keep the sickest workers from affording the care they need,” said Alan Balch, vice president of the Preventive Health Partnership, an alliance of the American Cancer Society, the American Diabetes Association, and the American Heart Association.

And we warned earlier of the growing corporatization of health care:

If Massachusetts is the political model of the ACA, the industry model is Kaiser Permanente by combining the roles of insurance company and medical provider with its network of hospitals and clinics. As ACA implementation nears, Kaiser has stepped up practices once associated with the worst abuses of HMOs. These include delaying medical appointments, restricting hospital admissions, and rapid discharge of patients from the hospital care to other settings. These include sending people home where the care burden is placed entirely on family members, or to outpatient facilities or nursing homes that have fewer regulations and fewer, typically lesser skilled, lesser paid staff where the patients receive less care than in hospitals. Other industry giants hope to follow this path, enrolling new members who are required to buy insurance, while they are more directly able to control their expenditures for care and can more easily slash spending. The ACA encourages care cutting practices through several mechanisms, including financial penalties for hospital re-admissions, an incentive to keep people out of the hospital, and rewarding providers who divert patients to outpatient clinics.

And of course, Obama will be gone from office before all these corporate-enriching chickens will have come home to roost. Nicely played.