By Sell on News, a macro equities analyst. Originally posted at MacroBusiness.

Europe, Japan and America are printing money at an extraordinary rate. It has reduced the cost of debt to negligible levels. Usually this is explained with reference to what is happening in the conventional economy, but I suspect there may be another explanation. The systemic effects of the bizarre financial system that we have created, which is based on leverage. That leverage, which is thought of as debt, is not really what we mean by debt.

One of the features of the explosion of derivatives in the last 15 years, the rise of “meta money”, is that it was achieved through the creation of massive amounts of leverage. When Long Term Capital Management nearly destroyed the world financial system in 1998, it was done through a highly leveraged play on the rouble. LTCM was brought undone when Russia defaulted on its bonds.

Nothing was learned, and the creation of this meta money was encouraged rather than stopped. Derivatives are now more than twice the capital stock of the world. Oh what fools these mortals be.

The reason so much leverage is used is that the investment plays can be quite small, based on fairly incremental changes in price. But those small changes can be amplified using huge levels of debt/leverage.

Leverage is technically debt, but it is very different from, for want of a better phrase, “normal” forms of debt. The shortest type of debt in the money markets is the overnight cash rate, a period of 24 hours. That is an aeon in the current financial markets. Leverage games, especially in the high frequency trading arena, can occur in micro-seconds, perhaps even nano-seconds.

This means that the interest rate on the debt is rendered fairly meaningless. If the debt has, say, a 7% interest rate, that is the return over a year. If you incur that debt for only a few minutes, or even a day, the interest costs are so negligible as to be unimportant. All that matters is what happens to the price of the asset that is the subject of the investment play.

There is thus a crucial difference between conventional debt, such as a mortgage on a house that takes decades to pay off, and leverage in the meta money markets. Conventional debt is subject to the tyranny of compound interest. Meta money leverage is not. They are very different types of transactions.

It occurs to me that the evaporation of interest rates across the major developed economies, which represents the disappearance of the cost of capital, may be the consequence of the “meta money” leverage becoming so dominant. This new form of debt-like transaction in the meta money markets, in which interest rates are largely redundant, is having an effect on what is happening to interest rates in the more customary forms of debt.

The situation is certainly very strange, even bizarre. The threat in the developed world, especially in Japan, seems to be deflation. Central banks are printing money with furious intensity, which seems to imply a shortage of money.

Yet when we look at the world of meta money, there is definitely no shortage of capital, indeed quite the opposite. Derivatives are twice the capital stock of the world. Admittedly this is not “money” in the conventional way, it is gambles that net out to much smaller amounts. But it is a type of transaction, and money in the end is only transactions.

They are meant to be parallel universes, “real” markets at one level and “meta money” markets at another. But as we saw in 2008 when the meta money nearly destroyed the US banking system, they are not parallel, they intersect. Meta money is increasingly affecting what is happening in the more familiar capital markets: bonds, bank debt, equities. That is the price of the recklessness of allowing these crazy markets to emerge.

Banking crises are not new, but usually it is bankers working within government stipulated rules to exploit everyone else, and that exploitation has wreaked damage on the overall system.

This time it is different. Governments have given over the rule making to private actors. Unsurprisingly, those private actors have invented a myriad of rules to benefit themselves. And equally unsurprisingly that is creating a chaotic system that governments are struggling to manage in any way. I am reminded of Keynes’s comment:

I am also reminded of Goya’s famous image of Saturn devouring his children, a massive painting depicting self destruction. Capitalism, I suspect, is doing its best to follow communism into the grave yard. Its strength was that it was not an ideology, just a practice – markets, after all, have been around for thousands of years. But the capitalist ideology of “financial deregulation” whose fruits are now so evident, the worship of markets as the solution to everything, is threatening the system itself.

Lambert here: The Goya painting mentioned by the author: 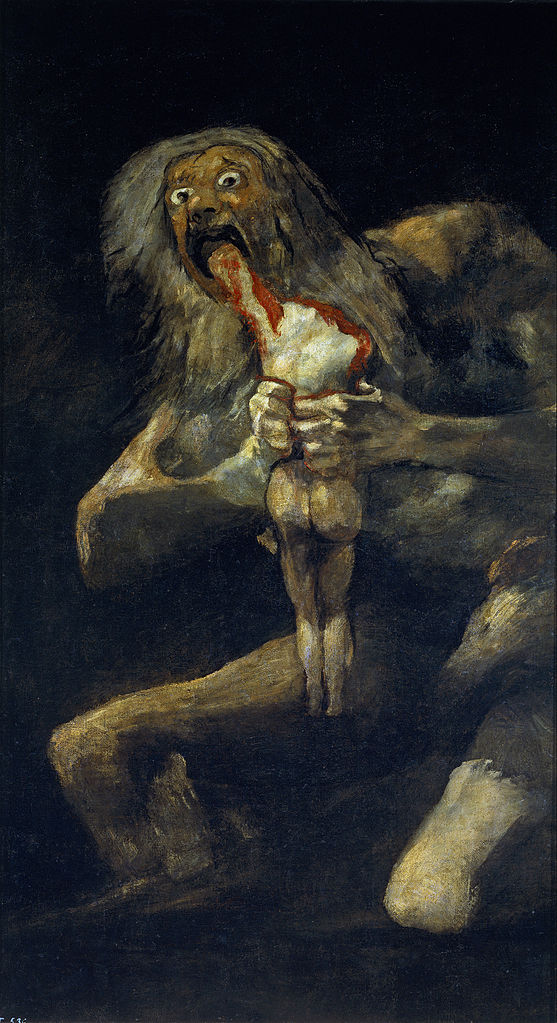