The Bank of Japan is certainly accomplishing the worthy task of devaluing the yen by wagging its mouth and printing enormous amounts of money. From mid-September to May 23 – the day the whole construct began tottering – the yen dropped 24% against the dollar. Then the Japanese stock market took a nosedive, and the yen retraced some of its decline. But it’s still down 18%. Japan’s attack in the Currency War was supposed to make it more competitive in international trade – but that, it failed to do. In fact, the opposite occurred.

Japan’s trade deficit in May jumped 9.5% from an already awful May last year, to ¥993.9 billion ($10.5 billion), the eleventh month in a row of trade deficits, the longest period of trade deficits since the series of comparable data started in 1979, the largest deficit for any May, and the third largest trade deficit ever.

The report by the Ministry of Finance wasn’t a fluke. April had been the worst April ever, March had been the worst March, February the worst February…. The deterioration has been systematic, unrelenting, and brutal. The chart below, going back to 2011, shows how the trade deficit in each month this year was worse than in the equivalent month in 2012; and in 2012, they were worse than in 2011. 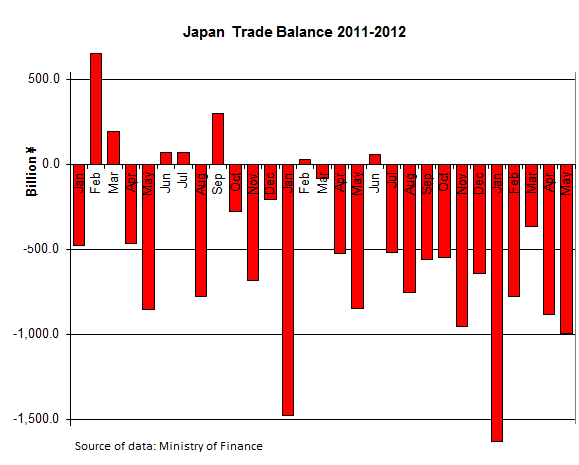 Abenomics didn’t start digging that hole. That happened years ago, gradually, through a thousand cuts and structural changes by Japan Inc., the same process that began in the US decades ago, namely offshoring production. But Abenomics is digging the hole at a more furious pace.

The weaker yen did drive up exports by 10.1% in May from prior year, but imports, which now have to be paid for with the same weaker yen, rose 10.0%, from a much larger base!

China has become Japan’s largest trading partner, and largest export market. They might hate each other and needle each other and step on each other’s toes while they dance around their various disputes, island issues, and historic massacres, but they do trade. And the trade deficit with China soared 34.8% in May to ¥410 billion.

Trade with China involves having to jump through some murky hoops, including transshipments through Hong Kong, which skew the numbers. To correct for that, we look at China and Hong Kong combined. That way, the trade deficit with both was only ¥78.4 billion. But it nevertheless jumped 29%. Part of the relentless deterioration – from May 2007, when there was a trade surplus of ¥318.5 billion.

It was a continuation of the same song: exports to Hong Kong and China rose 14.0%, but imports rose even more, 14.7%. Just how important are these two trade partners? Over a quarter of Japan’s total exports end up there, and almost a quarter of its total imports come from there.

Like its US counterparts, Japan Inc. has become expert at offshoring. Part of the motivation is the greener grass on the other side of the pond, namely cheap labor. But increasingly in huge markets like China, there has been an even more powerful logic: companies want to be closer to their customers.

As Japanese manufacturers have set up shop in China and other countries, their Japanese suppliers are under pressure to be closer to their customers. The auto industry is a prime example: when Honda sets up production plants in China, its Japanese suppliers increasingly end up following, lest they lose that business to Chinese suppliers, which many of them do anyway. Some of their products, particularly components, filter back into Japan. A type of offshoring that cannot be reversed by monkeying around with the currency.

So the usual suspects, rising imports of crude oil and LNG, have been blamed for the trade deficit, and they’re up, but the entire category of Mineral Fuels inched up only 2.7%. They’re not the big culprits.

What drove up imports the most was the second largest category, Electrical Machinery (semiconductors, telephony equipment, etc.), formerly Japan’s forte: it soared 23.7%! And the third largest category, “Other,” which includes scientific instruments, clothing, furniture, etc., rose 12.2%, with imports of apparel jumping 22.3%! Indeed, the wealth effect and corporate optimism kicked in. Consumers spent money more freely – on imported bras, purses, ties, luxury goods, and doodads. And Japan Inc. bought equipment and components, and they were all supporting the economies of Bangladesh and China. The first failure of Abenomics, and a side effect of its Currency War.

But China has its eyes riveted on the revolt in Brazil. Like all revolts, it’s about deep-seated issues and inequalities. Yet the spark that lit it – after inflation had made life too expensive – was an increase in bus fares. Read…. Currency War Rattles Brazil, Wakes Up the People