The Chinese central bank is playing very high stakes poker. China’s interbank markets have been highly stressed for the last two days. An effort by the central bank to tighten in order to put a crimp on shadow banking activities looks to be spiraling out of control as one-week repo rates hit nearly 8.3% up 144 basis points in a day, and one-week Shibor has risen from its June 5 level of 4.8% to just shy of 8.1% today. Per Reuters:

The People’s Bank of China (PBOC) told the market that it would not conduct repo business in its regular open market operations on Thursday, frustrating widespread expectations that it would use reverse repos to inject cash to ease an acute market squeeze over the last two weeks.

By not easing liquidity conditions, it could exacerbate an economic slowdown that already appears well under way. China’s factory activity weakened to a nine-month low in June as demand faltered, a preliminary survey showed on Thursday.

But a full-blown crisis is unlikely as liquidity is expected to improve significantly from mid-July, after the seasonal effects of the quarter-end fade and a large volume of maturing PBOC bills and government bonds injects cash into the market, traders said.

As an indication that the market expects improved cash supply in coming weeks, the 14-day repo rate fell
52 bps to 7.41 percent in early trade on Thursday, while the 21-day rate rose a moderate 8 bps to 7.59 percent.

More detail from the Financial Times:

The main reason for the lack of liquidity has been the central bank’s reluctance to pump liquidity into the money market, wrongfooting banks that had expected Beijing would continue to support them with large cash injections.

Signalling that the cash crunch could persist for a while, the China Securities Journal, a big state-run newspaper, ran a front-page commentary saying China was at a turning point in monetary policy. “We cannot use as fast money supply growth as in the past, or even faster, to promote economic growth,” the newspaper said. “This means that authorities must control the pace of money supply growth.”

Interbank rates began to rise earlier this month ahead of a public holiday – a normal pattern as demand for cash typically increases before festivals in China. Bankers and analysts had expected rates to fall when the country got back to work.

Instead, the central bank has remained on the sidelines of the market over the past five working days, refusing to provide the short-term cash injections that banks had expected. On Thursday, the PBoC said it would not conduct repo business at a scheduled auction, disappointing market players who thought it might relieve pressure on them by making a cash injection.

“The only explanation is that the central bank wants to send a warning signal to commercial banks and other credit issuers that unchecked credit expansion, particularly through the shadow banking system, will not be accommodated,” said Na Liu at CNC Asset Management.

Now the notion that liquidity will be better soon may sound reassuring, but recall the progression of our financial crisis. It moved through four acute phases. First was August-September 2007, when the US asset-backed commercial paper market froze over subprime worries. The next was November-December 2007. That, by the way, had a “seasonal” element not unlike the one mentioned in the Reuters story, in that liquidity normally is low at year end because a lot of investors try to close their books (at least as much as they can) as of mid-December. But things got sufficiently dire-looking that the Fed launched its first emergency lending facility, the TAF, in early December. The next was due to the Bear meltdown, March 2013, and the last was the big one, September 2008, in which the conservatorship of Fannie and Freddie were openers to the Lehman collapse and the panicked AIG salvage operation.

Given that accommodating central bank in economies with pretty good reporting was unable to forestall a meltdown, the Chinese central bank’s tough guy stance isn’t looking like the best reflex. The underlying concern isn’t just that there’s been a short term crunch, but that it comes against a backdrop of massive and increasingly low-productivity debt financed investment. And in another worrisome parallel to the crisis just past, it’s pretty doubtful that the authorities have any better handle of the size and interdependence in their shadow banking system than ours did in 2007. A sampling of alarmed commentary. MacroBusiness:

There’s no mystery about why stocks and the dollar are getting pounded today but there is another bogey that is not helping. As I noted this morning, China is going through something of a credit crunch with the PBOC apparently engineering high short term debt costs to squeeze down credit growth. However, today it’s looking a little more chaotic with all short term rates shooting for the stars. 7 day repo for instance: 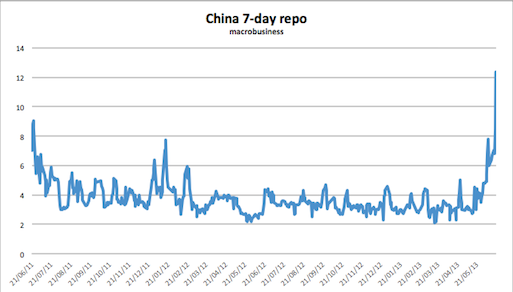 It is remarkable that China’s central bank has been unable or unwilling to contain the spike in short-term rates, as the interbank liquidity squeeze continues. This is roughly the equivalent of the Fed not being able to control the fed funds rate. You can certainly have fluctuations, but within a couple of days a major central bank should be able to inject enough liquidity into the system to bring down rates – unless of course the central bank wants the rates higher…

It’s not clear if people fully appreciate the potential impact of this liquidity squeeze – including folks at the PBoC. This is not a game. These tight conditions and high rates over a longer period can easily derail lending activities across the country while potentially putting a number of financial institutions at risk and sending the economy into a tailspin. With the Eurozone still struggling in the aftermath of the crisis, let’s see what a recession in China (12% of world’s GDP) can do for global growth. Mr. Bernanke and company may need to go back to the drawing board very soon.

Wang Tao of UBS, via the Financial Times:

A liquidity crunch could happen unexpectedly somewhere. There could be a disorderly deleveraging in the interbank market.

And this gives a clearer picture of the risks: 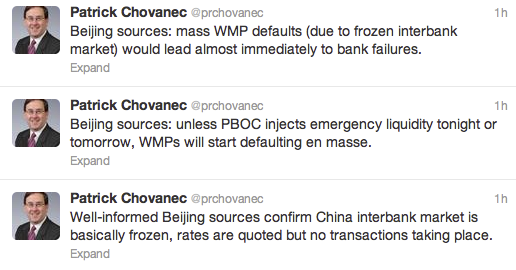 And as Chovanec also points out, “all the liquidity injections in the world won’t save bad investments from being bad.” But disorderly failures can have knock-on effects to otherwise good but not terribly liquid holdings. That’s the logic of the Bagehot rule: in a crisis, lend freely against good collateral at penalty rates. The PBoC is playing Russian roulette by ignoring this principle. It may come out of this staredown fine, but this is a fraught exercise.