Manufacturing and PMI Data out for Europe overnight and, much like the flash data, the news is getting better but with some serious caveats. 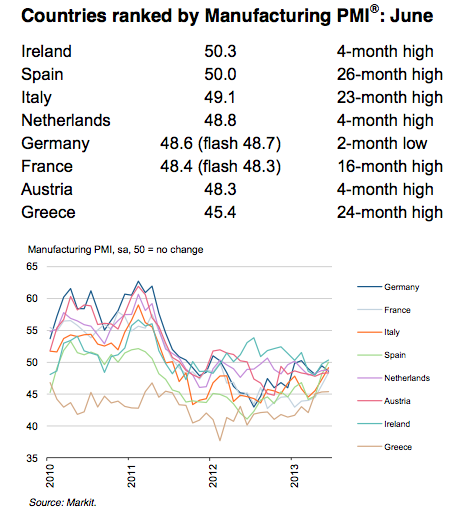 The Eurozone manufacturing sector moved a step closer to stabilisation at the end of the second quarter, with rates of contraction in output and new orders continuing to ease.

The seasonally adjusted Markit Manufacturing EuroZone PMI rose to a 16-month high of 48.8 in June, up from 48.3 in May , and slightly higher than the flash estimate of 48.7. Over the second quarter as a whole, the average reading for the headline PMI (47.9) was the highest since Q1 2012. The PMI has nonetheless remained below the neutral 50.0 mark since August 2011.

Among the nations covered by the survey, only the German PMI failed to rise in June. Ireland saw a marginal improvement in manufacturing business conditions and Spain experienced a stabilisation, while rates of contraction eased in France, Italy, the Netherlands, Austria and Greece.

Comments from Markit’s chief economist given the overall all picture of a stabilising downturn:

Eurozone manufacturing is showing welcome signs of stabilising. Both output and new orders barely fell during June, and on this trajectory a return to growth for the sector is on the cards for the third quarter. Output rose again in both Germany and the Netherlands, but it is the “periphery” where the most encouraging signs are being seen.

Returns to growth were seen in Ireland and Italy, while the rate of decline in Spain eased sharply to only a marginal pace. Greece and France were the worst performers, though the latter saw a further easing in its marked rate of decline.

Falling commodity prices and intense competition meanwhile meant inflationary pressures remained well under control, posing few worries for policymakers. With the region suffering from record high unemployment, the ongoing decline in manufacturing headcounts is a disappointment, and suggests the jobless rate has yet further to climb. However, some consolation can be gained from the latest fall in employment being the smallest for over a year.

So, as I stated on the flash data release, we are seeing some positive news about of many countries in terms of rebalancing across the zone. Certainly a cease to the rise of manufacturing in Germany, led by falling new orders, against a rise in the rate of decline in the periphery is a positive in those terms. But as can be seen by the unemployment levels this adjustment is being forced on the economies by choking off internal demand. Once again the latest figures from Eurostat show unemployment continues to rise on trend: 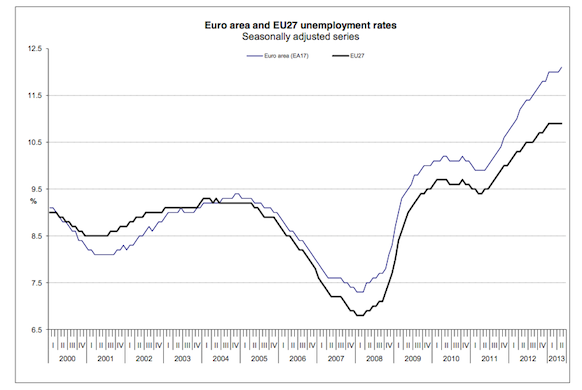 Unemployment aside, which is quite an ask I know, this is a far rosier picture in terms of the macro-settings across the zone than a year a go. Downturns in manufacturing appear to bottoming, aside from The Netherlands. Combined with the latest retail PMI, there ongoing signs that the slow rebalancing is taking shape. In my opinion France still remains a concern, given the structure of the economy and it’s susceptibility to government sector austerity, and The Netherlands is now a major economy to watch as high private sector debt make the continuing rise in unemployment a major issue.

We are also seeing improvements in Italian manufacturing, however this again appears to be coming at the expense of internal demand as the retail PMI continues to fall away at pace. Cyprus is, of course, a basket case, and remains so.

It is another positive to see renewed export sector strength out of Spain, but there is a long way to go before that translates into employment and the country now has a greater unemployment issue than Greece. The big outstanding question now is whether all nations can continue to rebalance. As I stated in my previous PMI assessment:

The issue for the Eurozone was never whether one or two countries could successfully implement a rebalancing, it was whether all of them could at the same time. As I’ve stated before Italy and France together have a GDP in excess of that of Germany, and although we are witnessing some improvement in the macro settings of some of the periphery nations, with the exception of employment, the problems have now made their way to larger economies which will require much larger compensating factors to counter-act these downturns.

In reality what is required is a further re-balancing from the creditor nations of the zone and, although we have seen some action in wage inflation in Germany, the country is still running massive trade surpluses which have to, in part, be recycled through opposing deficits within the Eurozone. The Eurozone has also been counting on an improving global economy to stimulate external demand, however after yesterday’s China PMI and what looks to be a possible credit crunch looming in the country that hope is looking increasingly shaky.

I’m a little more positive now than I was when I made that assessment, but the core premise is the same. The data looks good, but there are many risks still evident, as improvements in the export sector and the expense of internal demand risks flaring up new issues in the banking sector and the broader economy.

In short, the news is getting better, but there is a long way to go.