By Joe Firestone, Ph.D., Managing Director, CEO of the Knowledge Management Consortium International (KMCI), and Director of KMCI’s CKIM Certificate program. He taught political science as the graduate and undergraduate level and blogs regularly at Corrente, Firedoglake and Daily Kos as letsgetitdone, and Lambert Strether, who blogs at Corrente. Joe did the heavy lifting on this!

Many people, and especially Obama supporters, characterize the ACA (ObamaCare) as “just starting” or a “work in progress” and then go on to urge that the program will have “glitches,” needs to be “tweaked,” isn’t yet “fully implemented,” and so forth. We think it’s a mistake to see the ACA as just starting. We also think it’s a mistake not to weigh the costs of ObamaCare’s stately three-year progress toward partial coverage for the the American people, and just as important to weigh the opportunity costs.

The ACA was passed in March 2010, incorporating many features designed to meet Republican objections to the Bill. Yet, in the end, Democrats never put Medicare for All on the table, abandoned the public option and many other features, and did not get a single Republican vote in either chamber.

The Democrats even saw to it that the bill was fiscally neutral over a 10 year projection at a time when the tanked economy needed more deficit spending and the jobs that would have brought. And to do that, they postponed implementation of most of the bill for more than three years, until now, allowing people to go without care, to die, to divorce, and to lose their homes or go bankrupt due to medical bills, just so they could argue that the bill was fiscally neutral. In gauging the record of the bill, these 3 to 3.5 years of waiting for its implementation and their real costs to the people of the United States must be taken into account.

It also must be taken into account that in the year before the ACA was passed there were some 45 million Americans uninsured, and they were dying at the rate of 1,000 more for every million than in the general population. That is, lack of insurance was causing more than 45,000 fatalities per year. (The cost of those deaths in money terms: $1.38 trillion).

When the ACA was passed it was estimated by its proponents that it would cover 35 million more people than before. Now these same proponents are using the figure 31 million new people covered instead. Meanwhile the population of the United States has grown by 9 million people, and due to the effect of the crash of 2008, millions of people who were insured before the crash are now uninsured. So, though there are no hard figures on this it is likely that estimates of 30 million still uninsured are on the low side. And when we consider that HHS, today, for actuarial reasons, is marketing to the young and healthy, and not the vulnerable and disengaged, it seems quite possible that the 45,000 fatalities per year will not decrease significantly, if at all.

Even if the projection of 31 million new people covered is accurate by say 2017, we will still have as many (assuming further population growth) as 28 million uncovered people then, because the Democrats chose to pass the ACA rather than the Conyers/Kucinich enhanced Medicare for All bill, HR 676. So, 9 years after the effort to pass universal health care started in 2017, we would still have 28,000 fatalities per year to cope with and 28 million going to emergency rooms for care that is too little and often too late (assuming that regulations and laws are not changed to tighten up or eliminate ER access, using the ACA as a pretext).

Furthermore, it’s perfectly possible that the current 31 million new coverage projection is still too optimistic about the future. Many states are still fighting the ACA and will not implement its Medicaid provisions. Some 17 million out of the 31 million new people covered were going to go into the expanded Medicaid program. But with State Governors in Southern and some Western Red States refusing to allow that Medicaid expansion to occur, we may end up with only 9 million new Medicaid enrollees nationwide. Many others will try to game the system because they are willing to accept the risk of mandate violations and fines rather than pay the cost of the lousy insurance offered for basic plans in the ACA.

All in all that 31 million may well turn into 17 million or so before all this is done. And then we would have taken 9 years of passage, waiting, and implementation and would still have as many as 40 million people uncovered in 2017, and 40,000 annual fatalities.

That is the measure of the possible failure of the ACA.

Is that better than nothing? Sure, but you also have to take into account the opportunity cost of what was done in 2009 to work towards and then pass the ACA in 2010. What if the Democrats had ignored the Republicans in 2009, and used reconciliation or elimination of the filibuster and their big majorities in both Houses to try to ram through HR 676?

I think they would have succeeded because Nancy Pelosi had full control of the House, and with elimination of the filibuster and even reconciliation they would have needed only 50 votes + 1 (the VP) in the Senate to have passed that bill in the Spring of 2009, and implemented it by January 2010. Then there would have been no rise of the Tea Party, no sabotaging of the ACA, and full coverage for everyone with no co-pays.

That’s what we’ve lost by not trying to pass HR 676 and by trying instead to take a bipartisan insurance company conciliation approach to passing the ACA. This post, gives the total for the anticipated opportunity cost by comparing Romney’s 2012 alternative to the ACA, the baseline of no reform at all, the ACA, and Medicare for All over the period 2010 – 2022. Bottom line: the ACA is projected to cost 286,500 lives through 2022, assuming no change. That’s a lot better than the baseline and a lot better than Romney’s 2012 alternative. But it’s still terrible compared to what we might have had if we had a President who really represented people rather than Wall Street. 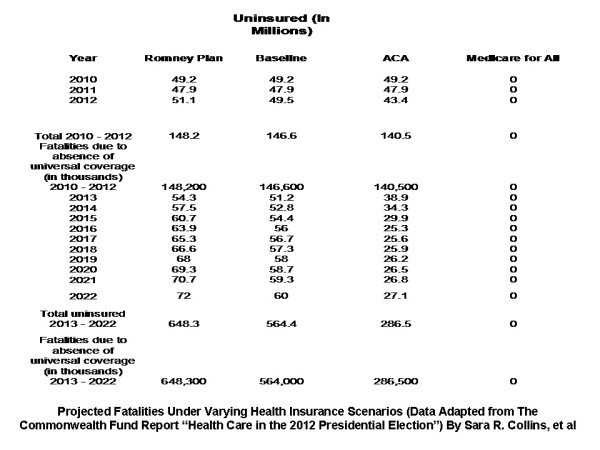 What if an effort to pass HR 676 had failed in 2009 because too many Democrats in the Senate defected to pass it? Well, I think this would have been very unlikely with the very large Democratic majority and the popularity of the president at its height, but even if it would have failed, then the Democrats could still have compromised with members of their party to pass enhanced Medicare for All for everyone under 26 and over 45, or under 26 and over 50, or whatever compromise would have moved those wayward Democrats up to the 50 vote mark. Such a compromise bill would still have lowered the fatalities substantially by providing insurance for those who needed it most and by enhancing the Medicare program for seniors (full coverage and no co-pays). It would also have been something Democrats could have run on and built upon in each successive election year, rather than having to defend the sorry ACA with its package of inadequate goodies, silly mandate, IRS enforcement, high cost for lousy coverage, and Rube Goldberg eligibility determination. Again there would have been no Tea Party, because Tea Partiers like Medicare, and there would have been no Republican nationwide sweep in 2010, no gerrymandering, no voter suppression, no anti-woman bills, and none of all the rest of the nonsense we’ve seen because the Democrats did what they did.