Yves here. Given the almost innate bullish bias of equity investors, when they start worrying about something, that means it actually has non-trivial odds of happening. So the idea that investors think it’s possible that a lot of current proven fossil fuels won’t be lifted is an unexpected bit of good news on the climate change front. Whether this comes to pass soon enough to save our collective bacon is another question entirely.

By Rory Johnston, a Master of Global Affairs student at the University of Toronto’s Munk School of Global Affairs where he focuses primarily on the intersection of geopolitics and energy markets. He has worked as a consultant in the Ontario electricity sector and is currently an Adjunct Junior Fellow at the American Security Project in Washington, D.C. Cross posted from OilPrice

The “carbon bubble” is a concept that has been gaining momentum over the past year. In brief, the theory claims that in order to avoid catastrophic climate change, the world must remain within its “carbon budget”—the volume of CO2 that can be emitted before the Earth’s temperature is pushed over the 2°C benchmark agreed upon by the international community. However, according to the IEA, “no more than one-third of proven reserves of fossil fuels can be consumed prior to 2050 if the world is to achieve the 2°C goal, unless carbon capture and storage (CCS) technology is widely deployed.” Following this theory to its logical end, the remaining two-thirds of global fossil fuel reserves are “unburnable”—that is, worthless. 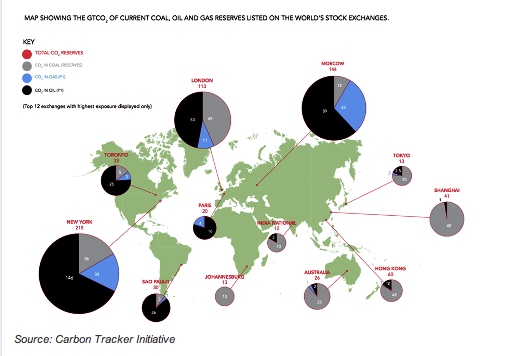 Addressing the market implications of this reality, HSBC published a report that found that a carbon-constrained future could dramatically reduce the market value of major fossil fuel firms—up to 60%, depending on demand repercussions.

A group of 70 investors representing over $3 trillion in assets is pressing 45 major oil, gas, and coal companies on what they plan to do about this looming threat to their business model. In a letter sent to British Petroleum executives, they state that it is “important to understand how current and probable future policies to make these emissions reductions will impact capital expenditures and current assets in the oil and gas sector and how the physical impacts of unmitigated climate change will impact the sector’s operations.”

Anne Stausboll, chief executive of the California Public Employees’ Retirement System (CalPERS), said, “we have a fiduciary duty to ensure that companies we invest in are fully addressing the risks that climate change poses.” CalPERS is the largest pension fund in the United States with almost $260 billion in assets.

Exploration and development is extremely expensive, and investors are wondering whether this money is being spent to develop reserves that will never be sold.

The letter asks that “BP review both its exposure to these risks and its plans for managing them,” and to prepare a full response in advance of BP’s 2014 annual stockholders’ meeting.

The letter is part of a larger campaign organized by Ceres, a Boston-based non-profit whose stated mission is to mobilize “investor and business leadership to build a thriving, sustainable global economy.” 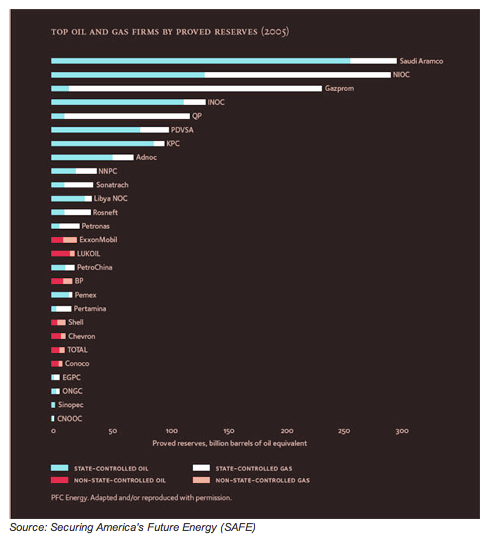 While the market repercussions of the carbon bubble are a serious threat to investment portfolios, the larger implications of unburnable assets will be felt by state-owned enterprises.

By current estimates, 90% of the world’s oil and gas reserves are in the hands of governments—not only does this make it more difficult to control their use, but it hints at future geopolitical shifts should the demand for these resources disappear due to prudential climate policies in West.

While it is unlikely that the international community will prevent the global climate from breaching the 2°C benchmark, current fossil fuel consumption patterns will need to be altered in order to avoid truly catastrophic climate change in the future. When that happens, the world is going to run headlong into the fact that the current financial and geopolitical system has been built up around the consumption of carbon—transitioning to another system is going to be painful, both economically and politically. The sooner markets and states recognize and begin planning for this inevitability, the better able they will be to handle that transition when it is thrust upon them by necessity.