By Hugh, who is a long-time commenter at Naked Capitalism. Originally published at Corrente. A complete archive of Hugh’s reports can be found here.

The short version:
The government shutdown is over, and the Bureau of Labor Statistics has belatedly released its jobs report for September 2013. The seasonally adjusted numbers were little changed. Unemployment dropped a tenth of a percent to 7.2%. The real story is on the unadjusted side. September marks the end of summer and the beginning of the school year. The labor force declines as people leave or their jobs end. The official unemployment declines too as the unemployed leave as well. However, real unemployment (~12.4%) and real disemployment (~17%) remain high, and little changed.

Officially in the business survey, 148,000 jobs were added in September (seasonally adjusted). Although with all the revisions we have seen in recent months, this should be taken with a large grain of salt. At the same time, on the unadjusted side of the survey, the end of summer and the beginning of the school year are reflected in a loss of 350,000 private sector jobs and government adding 1 million.

Wages and hours worked, which are always seasonally adjusted, changed little or not at all last month.

Potential Labor Force
In September, the potential labor force as defined by the Civilian Non-Institutional Population over 16 (NIP) increased 209,000 from 245.959 million to 246.168 million. Multiplying this by the seasonally adjusted employment ratio for September (58.6%) gives a rough estimate of the number of jobs needed to keep up with population growth: .586(209,000) = 122,000.

Unadjusted, the labor force decreased by 435,000 from 155.971 million to 155.536 million. You will remember that the unadjusted labor force declined 1.225 million last month. August and September mark the end of the seasonal summer drop off in the labor force. There is usually a big rebuild in October. It will be interesting to see what the effect of the government shutdown, if any, will be on this.

Unadjusted, it fell two-tenths of a percent to 63.2%, as we would expect with the fall in the unadjusted labor force.

Employment-Population Ratio
Seasonally adjusted the employment ratio, the ratio of the employed to the potential labor force of the NIP, was unchanged at 58.6%.

Unadjusted, it fell three-tenths of a percent to 7.0%.

While the signs for the changes between the seasonally adjusted and unadjusted numbers are opposite, the actual numbers mark a brief convergence between the two.

Unadjusted, voluntary part time workers increased by 1.45 million to 19.151 million from 17.701 million. This kind of large increase in September is expected but is actually 300,000 smaller than the increase seen last year.

[Standard Note: As usual, I will note that the distinction between voluntary and involuntary is often in the eye of the beholder. Part time workers for voluntary reasons include those who must work part time because of they are raising children, taking care of a relative, or on Social Security and must restrict their hours to stay below Social Security limits on income. For the workers involved, part time work often is not a voluntary choice.]

Seasonally adjusted, the U-6 is composed of 11.255 million unemployed, 7.926 million involuntary part time workers, and 2.302 million of the marginally attached (those who have no job but looked for work in the last year but not the last month; a decrease of 40,000 from August), or 21.483 million total, a decrease of 86,000 from last month.

[Standard note]
As said above, the BLS has a restrictive, though internationally recognized, definition of unemployment, that is without a job but have looked for one in the last 4 weeks. The marginally attached are not counted as part of the labor force and their use in the U-6 is an indication that this is what the BLS considers its functional undercount to be.

The BLS also has a more extended category: Not in Labor Force, Want a Job Now (seasonally unadjusted). In September, this fell 516,000 to 5.775 million.

This BLS category does not often reflect well actual movements in the economy. So I have developed a simple alternative to it. I calculate the size of where the labor force should be by multiplying the potential labor force of the NIP by a participation rate characteristic of a solid economic expansion (67%, the Clinton boom was at or above this level for nearly 40 months). The difference between this and the current labor force measures the size of the real BLS undercount, those who do not have jobs but would work if jobs were available to them. This then allows me to recalculate where real unemployment is and where real un- and under employment (disemployment) is.

Analysis
This is a cumulative graph of seasonally adjusted disemployment, where we start with the unemployed, add in involuntary part timers, and finally add in my calculation of the BLS undercount. As we can see, unemployment upon which the official unemployment rate is based as gradually declined from its 2009-2010 plateau. This is consistent with the official Obama Administration narrative. But we can also see that beginning in November 2009, disemployment (the top line in the graph, and the sum of the unemployed, involuntary part timers, and my calculation of the BLS undercount) plateaued and has remained little changed since. This reflects the economy that most of us experience, the one where the recession never ended. 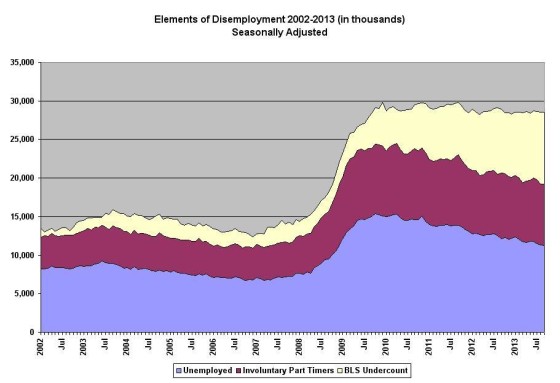 The big story here is, as I noted last month, that the business survey registers in September the effects of the end of vacation/beginning of the school year. Consequently, private jobs decline and public jobs in education skyrocket. At the local government level, education jobs increased in September 882,600 to 7.6827 million, and at the state level, 346,600 to 2.4308 million.

Hours and Earnings
Average weekly hours for all employees on private nonfarm payrolls was unchanged at 34.5 hours (the same as a year ago). Average hourly earnings increased 3 cents to $24.09/hour and average weekly earnings grew $1.04 to $831.11.

Average weekly hours for production and nonsupervisory (blue collar and clerical) personnel were unchanged at 33.7 hours (also the same as a year ago). Average hourly earnings increased 4 cents to $20.24 and average weekly earnings increased $1.35 to $682.09. This month blue collar and clerical workers, the bottom four-fifths of workers, did slightly better than the top fifth.

Household data (Employment/unemployment)
Statistical significance: +/ – 400,000
The A tables: http://www.bls.gov/cps/cpsatabs.htm
A 1 for most information and categories
A 2 Unemployment by race
A 8 Part time workers
A 9 Full time workers
A 12 Duration of unemployment
A 15 U 6 un- and under employment
A 16 Persons not in labor force