Rising political polarisation in the US has gone hand-in-hand with rising income inequality, falling top-end tax rates, lower taxes on business, rising leverage and higher asset prices. These trends may be coincidental, but they seem to reinforce each other. The medium-term risk is that some of these trends reverse, as occurred after the 1920s.

Congressional political polarisation and income inequality in the US are at multi-decade extremes (Exhibit 1). The polity is split; incomes are unequal. 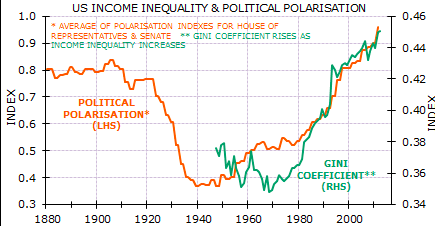 The rise in polarisation partly reflects electoral gerrymandering that has sharply reduced the number of contestable seats (Exhibit 2). Only 20% of House of Representatives seats would change hands on a 5% swing. This increases the centrifugal influence of the party members who dominate the increasingly-decisive party primary elections. 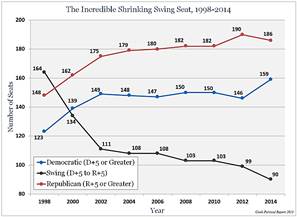 However, rising political polarisation pre-dates the decline in contestable seats: it started as incomes became more unequal. Inequality has not risen because the rich got richer faster than the poor. It increased because the income gains of the past 30 years have gone to the top 1%. Average income for the bottom 99% is now unchanged in real terms over the past 40 years (Exhibit 3). The rising tide did not lift all the boats: it floated a few yachts. 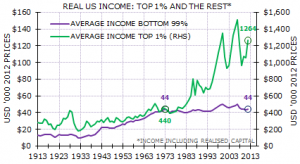 In 2012 the highest-paid 1% earned 21½% of total income, according to academic Emmanuel Saez (http://elsa.berkeley.edu/~saez/). This is the highest share since the 1920s. The lift in top-end income mainly reflected a rise in business income and salary payments. Exhibit 4 shows the source of income for the highest paid 0.1%, as a percentage of total US income. The income share of the highest paid did not increase just because capital has done better than labour: it also reflects the increase in the share of salaries going to the highest paid. 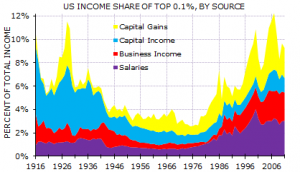 Several factors contributed to wage inequality. The increased supply of unskilled (Asian) labour damped low-skilled wages in developed economies (but increased wages in emerging economies). Rising inequality was also correlated with the rise in the relative pay of workers in finance (Exhibit 5). 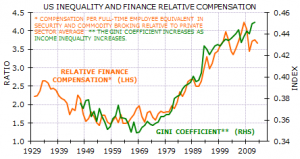 The rise in financial pay also was associated with the rise in economy-wide leverage (Exhibit 6). This was similar to the 1920s. Both periods saw important technological innovations and large credit booms. The technological improvements in the 1920s were far more important than those of the past decade or two, but the modern credit boom far out-stretched its 1920s predecessor. 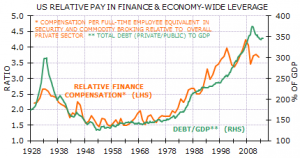 The rise in inequality now – as in the 1920s – has also been associated with a significant decline in tax rates on high incomes. Exhibit 7 shows the share of income going to the top 10%, and the top statutory income tax rate (inverted, so the line goes up as the rate goes down). The highest marginal rate was last below 40% in the 1920s. (Note one difference, however: the top rate now cuts in at an income of just under $400,000. In 1921 the top rate cut in at an income of over $13,000,000 in today’s prices.) 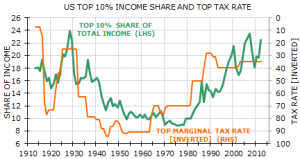 The increase in capital income has been assisted by the rise in profits as a share of GDP. This rise reflects rising pre-tax profits and falling average effective tax rate paid by business (Exhibit 8). 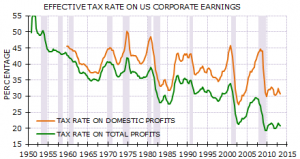 All these trends were favourable the owners of financial investments and for people working in the investment industry. Neither has had it this good since the 1920s. This cycle, like the 1920s, could have ended in a depression. Instead, aggressive policy response of central banks seems to have added another leg to the cycle. However, pushing these trends to historical extremes may start to cause problems for investors, as illustrated by the debt ceiling imbroglio. More to the point, it seems plausible that these trends will reverse, at some stage, to the detriment of financial assets.