We posted on the New York Times news story that opposition in the House to authorization of “fast track” authority to the Administration on its pending Pacific and Atlantic trade deals was stiffening right just before a related story broke: that Wikileaks had disclosed the end of August draft of one of the critical chapters of one of the deals.

We wrote yesterday that this deal, the Trans Pacific Partnership, already looked to be in trouble given both Congressional and foreign opposition. The Administration has conducted the talks with an unheard-of degree of secrecy, with Congressional staffers in most cases denied access to the text and even Congressmen themselves facing unheard-of obstacles (Alan Grayson reported that the US Trade Representative created an absurd six weeks of dubious delays in his case). But perversely, 700 corporate representatives got privileged access so they could influence negotiations. It’s not hard to see whose interests are really being served in these deals.

The Wikileaks disclosure could well have struck the fatal blow to this toxic pact. As we’ll see below, it may have been dead anyhow. Obama’s relationship with his own party is already on the rocks as a result of Obamacare (not just the rollout but the increasing recognition that the program has more fundamental flaws), so he has limited political capital available to whip Democratic Congressmen back into line. The opposition is more deep-seated and broad-based than I had realized (for instance, 18 of the 21 ranking full committee members in the House are against it). So the TPP looked to be on the Syria incursion path.

But it’s hard not to believe that the Wikileaks revelations will galvanize opposition among the other prospective members of the pact. It’s hard for democratic countries to agree to a deal that has been revealed will kill their citizens in order to enrich America’s Big Pharma incumbents. And that statement is not an exaggeration. Wikileaks disclosed the end of August version (apparently two drafts behind current text) of the intellectual property chapter, which includes the section on drugs and surgical procedures.

The intent is to strengthen America’s aggressive patent regime and require foreign countries to comply with it. For instance, the FDA considers minor changes in existing drugs, such as developing an extended release version so that a medication need be taking only once a day, to be a “new drug application” and will extend patents based on that. The draft also would severely limit the use of generics. Higher prices will restrict drug use and is certain to have adverse health consequences for some, potentially many, citizens. And although people overseas will suffer the greatest consequences, Americans will be affected as well. As Public Citizen wrote, “The U.S. Trade Representative (USTR) has proposed measures harmful to access to aﬀordable medicines that have not been seen before in U.S. trade agreements,” and elaborated: 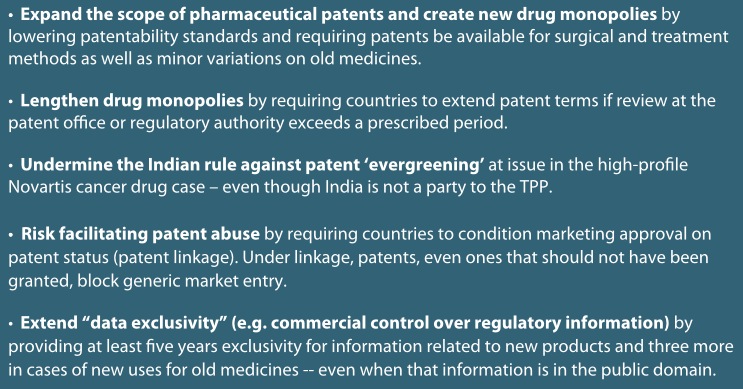 Another medical-industrial complex rent-extraction technique is by covering surgical methods . No, I am not making that up. See this section of an excellent discussion by Knowledge Ecology International:

An interesting example of how the US seeks to change national and global norms are the provisions in the TPP over patents on surgical methods. The WTO permits countries to exclude “diagnostic, therapeutic and surgical methods for the treatment of humans or animals.” The US wants to flip this provision, so that “may also exclude from patentability” becomes “shall make patents available.” However, when a version of the IP Chapter was leaked in 2011, the US trade negotiators were criticized for ignoring the provisions in 28 USC 287 that eliminated remedies for infringement involving the “medical activity” of a “medical practitioner.” The exception in US law covered ”the performance of a medical or surgical procedure on a body.” The US trade negotiators then proposed adding language that would permit an exception for surgery, but only “if they cover a method of using a machine, manufacture, or composition of matter.” The US proposal, crafted in consultation with the medical devices lobby, but secret from the general public, was similar, but different from the U.S. statute, which narrowed the exception in cases involving “the use of a patented machine, manufacture, or composition of matter in violation of such patent.” How different? As Public Citizen’s Burcu Kilic puts it, under the US proposal in the TPP, the exception would only apply to “surgical methods you can perform with your bare hands.”

I’m not sure how this would work in practice, but I imagine it would be ugly. For instance, Johnson & Johnson dominates the market for replacement hips and knees. They also provide tools used to perform the surgeries on those hips and knees which surgeons need to buy (as in no one had the incentive beside J&J to make these implements, and surgeons would be unlikely to scrimp on a secondary cost when it gets billed back to the patient anyhow). So it looks as if J&J would also somehow be able to charge additional fees on each operation, say if it introduced a new hip replacement which required some change in how the hip was installed (a new surgical method). How this would be enforced is over my pay grade.

The pact in its end of August form would also, as we had discussed based on concerned raised by the Electronic Freedom Foundation, interfere with basic Internet operations. The International Business Times summarized the EFF’s concerns:

Here’s the text of the relevant section of the TPP’s intellectual property chapter leaked Wednesday:

Each Party shall provide that authors, performers, and producers of phonograms have the right to authorize or prohibit all reproductions of their works, performances, and phonograms, in any manner or form, permanent or temporary (including temporary storage in electronic form).

The EFF wrote in a July analysis of the language — which has not been amended in the intervening months — that the provision “reveals a profound disconnect with the reality of the modern computer,” which relies on temporary copies to perform routine operations, during which it must create temporary copies of programs and files in order to carry out basic functions. This is particularly so while a computer is connected to the Internet, when it will use temporary copies to buffer videos, store cache files to ensure websites load quickly and more.

“Since it’s technically necessary to download a temporary version of everything we see on our devices, does that mean—under the US proposed language—that anyone who ever views content on their device could potentially be found liable of infringement?” the EFF wrote. “For other countries signing on to the TPP, the answer would be most likely yes.”

Another way the TPP will harm the Internet is, similar to SOPA and PIPA, is to obligate internet service providers to act as copyright police. Now, as Dean Baker explained on Bill Moyers, if a website posts material improperly, the site owner and the host are obligated to remove it as soon as the publisher is notified (in practice, if the publisher does not comply pronto, a nastygram to the webhost will get the entire site taken down). ISPs are extremely low margin businesses. Forcing high-cost monitoring on them would lead them to increase their staffing considerably. The resulting hosting increases would force the closure of most small independent sites. The increased oversight of ordinary users (they’d be required to monitor ongoing communications for piracy, which sounds like an NSA wet dream) would also likely lead to higher access charges for consumers.

I attempted to read the draft, which was largely over my head (as in you need to know extant intellectual property provisions in order to be able to see how this treaty language stands relative to it). However, even a casual reading shows that much of the language is still under negotiation, with many passages having numerous TPP parties on each side of an issue. So the negotiations looked to be fraught even before the Wikileaks disclosure.

On the US side, Rosa DeLauro and George Miller are leading the opposition to the use of fast track authority altogether. This is the key section of their letter, which already has 151 signatures:

Congress, not the Executive Branch, must determine when an agreement meets the objectives Congress sets in the exercise of its Article I-8 exclusive constitutional authority to set the terms of trade. For instance, an agreement that does not specifically meet congressional negotiating objectives must not receive preferential consideration in Congress. A new trade agreement negotiation and approval process that restores a robust role for Congress is essential to achieving U.S. trade agreements that can secure prosperity for the greatest number of Americans, while preserving the vital tenets of American democracy in the era of globalization.

Twentieth Century “Fast Track” is simply not appropriate for 21st Century agreements and must be replaced. The United States cannot afford another trade agreement that replicates the mistakes of the past. We can and must do better.

Let’s hope that lame duck Obama overplaying his hand on the “trade” front will indeed rouse Congress to pull back authority that it has over the years allowed the Executive to abrogate. If so, this will be an unexpected and welcome important side benefit of blocking these toxic trade deals.