By Yanis Varoufakis, professor of economics at the University of Athens. Cross posted from his blog

On 30th October, in its Report to Congress on Economic and Exchange Rate Policies, the US Treasury took a swipe at Germany, accusing it of exporting economic depression to the rest of Eurozone and, indeed, to the global economy. The German Finance Ministry responded the next day with a statement that: “There are no imbalances in Germany that need correction. On the contrary, the innovative German economy contributes significantly to global growth through exports and the import of components for finished products.” There are few occasions in any argument where one side is completely right and the other comprehensively wrong. This is one of them!

The US Treasury is spot on and the German response, unwittingly, confirms this. In this post I summarise the analytical foundation (as I see it) of the US Treasury position; a position that, incidentally, this blog has been putting forward (and analysing) for years. In brief, I shall be showing that to succeed, the current German policies must destroy whatever balance is left in the global economy. And given that, ultimately, it cannot succeed, it is bound to wreck further Europe’s Periphery and to deliver an unwanted deflationary shock to the global economy.

Following the Euro Crisis, and the collapse of the Periphery’s aggregate demand (as a result of both the sudden reversal of the capital flows and the austerity measures taken), investment in the Periphery collapsed (sometimes to negative levels). Thus, suddenly, the Periphery mimicked the surplus countries in that savings exceeded investment there too (S>I). At the same time, imports into the Periphery subsided (courtesy of the sharp recession) and so the Periphery’s Current Account deficit narrowed (e.g. Greece) or was even transformed into a surplus (e.g. Spain).

Enter the Germany-driven Eurozone-wide policy of balancing budgets across the Eurozone. Here is why this policy turns the Eurozone into an exporter of recession to the rest of the world (as the US Treasury has claimed):

the attempt to balance budgets can only bear fruit if the Eurozone as a whole manages to reach a Current Account surplus of between 8% and 10%. In other words, the Germany-inspired policy that is being pursued currently in Europe, as a means to fight the Crisis, is uniquely consistent with an attempt (perhaps an unconscious one) to turn the Eurozone into a mercantilist fiend; into a net exporter that would make China look like an exemplary global citizen.

Now, of course, the Germany-inspired policies are bound to fail. For it is clear that, as the Eurozone’s Current Account surplus is pushing beyond 1.5% and rising (as per the German plan) the euro will appreciate much more, destroying Germany’s best laid plans for turning the Eurozone into a Greater Germany while, at the same time, crushing what is left of the Periphery’s social economies.

Nevertheless, before they are abandoned, these policies are perfectly capable of doing a great deal of damage. Both to Europe and to the world. While the United States has, indeed, a great deal to answer for regarding its own contribution to global economic woes, on this matter the US Treasury is entirely correct: Germany is turning the Eurozone into a net exporter of deflation, recession and global instability.

The diagram below offers a snapshot of the relative macroeconomic position of the Eurozone’s deficit and surplus member-states in relation to their budget, current account and net investment positions. 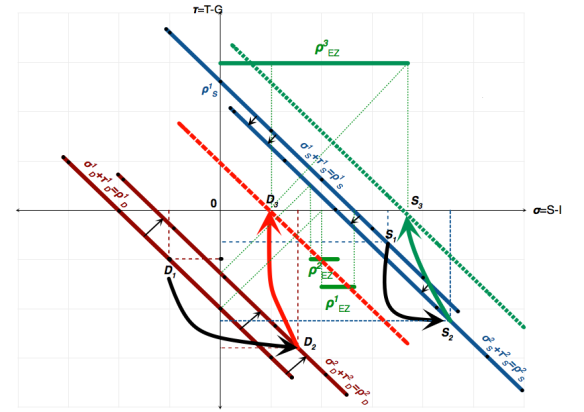 Before the Euro Crisis the Eurozone deficit and surplus countries where at points like D1 and S1: The deficit countries occupied a point on their ρD contraint which reflected a current account deficit (ρ1D<0), a budget deficit (τ1i <0) and investment exceeding savings, as a result of the capital inflows from the Eurozone’s core (as well as from the City and Wall Street). In contrast, the surplus member-states where finding themselves in the adjacent quadrant since, by definition, their current account was in surplus (ρ1S>0). So:

Before 2008/10, the Eurozone as a whole experienced a small but discernible trade surplus with the rest of the world ρ1EZ (=ρ1D+ρ1S>0).

After the Euro Crisis the Eurozone deficit and surplus countries were violently shifted from positions D1 and S1 (respectively) to positions D2 and S2 – see the black arrows. The deficit countries saw a collapse of investment which pushed them into the same quadrant as the surplus countries, with their trade deficit shrinking fast as imports collapsed. The result of this shift was that:

Germany’s current plan for the Eurozone is to balance budgets everywhere – especially in the ‘profligate’ Periphery. But this translates into a ‘push’ along the red arrow for the Periphery and the green arrow for countries like Germany, The Netherlands and Austria. Notice that, to be possible, such a ‘push’ demands that:

After 2013, the Eurozone becomes a mercantilist fiend – that its trade surplus with the rest of the world expands to a gigantic ρ3EZ (=ρ3D+ρ3S>0).

And this is the analytical underpinning of the US Treasury’s (correct) point: To succeed, the current German policies must destroy whatever balance is left in the global economy. And given that, ultimately, it cannot succeed, it will wreck Europe’s Periphery and deliver a deflationary shock to the global economy.