Yves here. This post looks at the strictures of the Eurozone (debt to GDP and deficit limits) and not surprisingly concludes that the supposedly independent ECB is making matters worse that a more “political,” as in growth oriented one, would. But depicting central bank independence as detrimental is a novel and important argument.

Some readers may be unhappy that this article accepts “fiscal consolidation,” aka austerity, as a given. But politically, it is a given, so one can read this piece as another way of treating the implications of the current policy and political arrangements in the Eurozone.

By Nicholas Crafts, Professor of Economics and Economic History at the University of Warwick and CEPR. Originally published at VoxEU

This column argues that the legacy of public debt resulting from the crisis in the Eurozone is a serious threat. Both the size of the problem and the options to address it make life much more difficult for policymakers than was the case in the late 1930s after the collapse of the gold standard. For some countries, a ‘subservient’ central bank might be preferable to the ECB.

The 1930s deservedly have a bad name. It is hard to imagine that a decade that included the Great Depression and a major de-globalisation of the world economy, and culminated in WWII could be other than notorious. And yet, compared with struggling Eurozone economies today, the economic situation in Europe in the later 1930s was in many ways more promising. This is particularly true of the aftermath of public debt and the difficulty of dealing with it.

As is reported in Table 1, to modern eyes, public-debt-to-GDP ratios in European countries were remarkably low at the end of the 1930s. There were several reasons for this. These include low pre-crisis debt levels, the weakness of the automatic stabilisers and the eschewing of fiscal stimulus in the crisis, and the collapse of the gold standard. 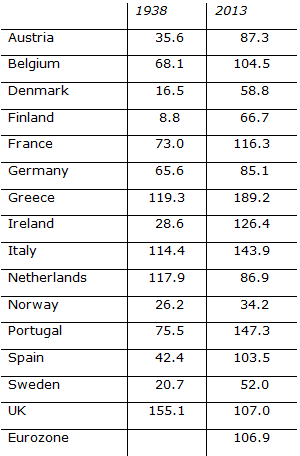 Figure 1 contrasts the growth experience of the Eurozone since 2007 with two groups of countries, namely, the sterling bloc and the gold bloc after 1929. The former devalued in 1931 and experienced an early and quite rapid recovery. The latter stayed on the gold standard till the bitter end and even in 1938 had only just regained the 1929 level of real GDP. Sadly, the Euro area is following a trajectory that looks rather too reminiscent of that of the gold-bloc countries in the 1930s. 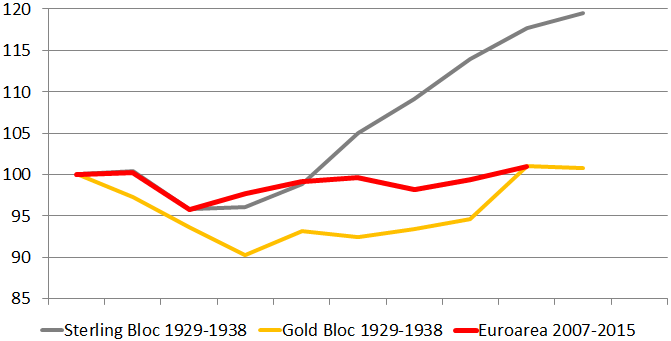 Notes: ‘sterling bloc’ comprises Denmark, Norway, Sweden and UK, all of which left the gold standard and devalued in September 1931; the ‘gold bloc’ comprises Belgium, France, Italy, Netherlands and Switzerland, all of which stayed on the gold standard until autumn 1936 apart from Belgium which exited in March 1935.
Source: derived using Maddison (2010) updated with The Maddison Project (2013); OECD (2013).

Financial Repression and the Public-Debt-to-GDP ratio

It is well-known that staying on the gold standard in the 1930s increased the severity and duration of the economic downturn (Bernanke 1995). It is commonplace to note that leaving gold allowed a return to independent monetary policy, was conducive to the end of price deflation, permitted policies that could change inflationary expectations, and facilitated necessary adjustments of real wages. It is less widely remarked that exit from the gold standard could make the achievement of fiscal sustainability and the reduction of public-debt-to-GDP ratios much less painful. The experience of the UK illustrates the point.

For the UK, leaving the gold standard made the fiscal arithmetic of dealing with the large overhang of public debt from WWI much less daunting. The required primary budget surplus as a percentage of GDP for fiscal sustainability (defined in terms of stabilising the public-debt-to-GDP ratio) depends positively on the size of the outstanding stock of debt as a percentage of GDP and the real interest rate, and negatively on the growth rate of real GDP. Compared with the late 1920s, the recovery of the 1930s was characterised by much lower real interest rates on government borrowing once price falls ended and interest rates could be reduced, and by faster GDP growth. The real interest rate on government debt fell from about 5.7% in the late 1920s to 2% in the mid-1930s, while growth increased from 2.2% per year to 3.6% per year.

In fact, the interest rate/growth rate differential was negative in the mid-1930s, implying that it would even have been possible to run primary budget deficits and to reduce the debt-to-GDP ratio. About a third of the reduction in the public-debt-to-GDP ratio after leaving gold came from this negative differential (Table 2). This circumstance arose partly because of the direct effects of the so-called ‘cheap money policy’, which held nominal interest rates down in a world of limited capital mobility, and partly because of strong private-sector growth. The cheap money policy was run by HM Treasury, not the Bank of England, the implication being that debt management objectives were given a large weight in monetary policy – in effect, a form of ‘financial repression’ (Crafts 2013).

Table 2. Decomposition of public debt ratio in UK (% of GDP)

The Bank of England was an early example of a general post-gold-standard trend towards central banks becoming ‘subservient’ to government – a relationship which remained quite typical in OECD countries until the 1970s (Goodhart 2010). Most European countries did not have a serious public debt problem after WWII, but for those like the UK and the Netherlands that did, the financial repression of this era of subservient central banking and capital controls, together with the rapid catch-up growth of the European Golden Age, meant that reduction of the debt ratio was relatively painless (cf. Tables 2 and 3).

Debt Overhang in the Eurozone

The rules of the Eurozone prescribe a gross government debt ratio of 60%, and the debt-convergence rules adopted in the light of the crisis indicate that 1/20th of the excess over this level shall be removed each year. The OECD (2013) calculates that to stay within this rule for every year from 2014 to 2023, Greece will have to maintain a primary budget surplus of about 9% of GDP, Italy and Portugal about 6% of GDP, and Ireland and Spain about 3.5% of GDP. Table 3 shows that in the past, equivalently large reductions in debt ratios have to a large extent depended on favourable interest rate/growth rate differentials. It is difficult to see this being repeated in a slow growth environment where monetary policy is run by the ECB.

Notes: Examples do not include cases where default occurred. The accounting is based on a permutation of the standard fiscal sustainability formula and the residual adjustment covers valuation effects, errors, and ‘below the line’ fiscal operations.
Source: Ali-Abbas et al. (2011).

If fiscal orthodoxy is the route back to Maastricht, this will entail a long period of high public-debt-to-GDP ratios. The implications of this are unlikely to be favourable for growth, and could have a significant negative impact. Although the claim of a 90% threshold beyond which growth declines sharply is probably not robust, the evidence does suggest that growth is likely to be adversely affected by high debt ratios (Egert 2013), and continuing fiscal consolidation will undermine growth in the absence of offsetting policy stimulus. The experience of the interwar period suggests that prolonged stagnation entails risks of incubating political extremism (de Bromhead et al. 2013) and anti-market sentiment. Given that maintaining the budget surpluses required in order to eliminate the debt overhang is quite possibly beyond what is politically feasible, the risk of further defaults is non-trivial (Buiter and Rahbari 2013).

How can the legacy of high debt-to-GDP ratios be addressed in a less damaging way (Crafts 2013b)? As the interwar experience underlines, a key starting point is for the ECB to ensure there is no price deflation in the Eurozone. Then, the alternatives to fiscal consolidation as a means of reducing public debt ratios are well known, namely, financial repression, debt forgiveness, or debt restructuring/default. Financial repression works on the interest rate/growth rate differential by way of the government being able to borrow at ‘below-market’ rates. Current EU rules severely limit the scope for this.1 History suggests that a combination of financial regulations designed for the purpose, the re-introduction of capital controls, and a central bank willing to subvert monetary policy in the interests of debt management might be required. Debt forgiveness would be very expensive for the creditors – forgiving a quarter of the debts of Greece, Ireland, Portugal, Italy, and Spain would cost about €1,200 billion – and, in the absence of watertight fiscal rules to prevent a repeat, risks a serious moral hazard problem. Paris and Wyplosz (2013) suggest that forgiveness could, however, play a part if the ECB were to buy up government debt in exchange for perpetual interest-free loans – in effect monetising part of the debt.

The implications of this discussion are quite uncomfortable. They are that, under the present agreements to resolve the crisis, several Eurozone economies face a long period of fiscal consolidation and low growth. For these countries, different rules of the game with regard to financial integration and, in particular, a different sort (1950s-style) of central bank would ease the pain. An ECB designed to make life easier for the debtors would have a higher inflation target, hold down interest rates for longer, and help in eliminating some of the debt overhang. Obviously, this is not a central bank for normal times – nor is it a design that Germany could contemplate – but in a depressed economy with a debt problem it might be more appropriate. The implicit fault-line within the Eurozone is evident.