Journalists and laypeople tend to use stock markets at their proxy for economic and financial market conditions. The performance of US stock markets looked like an encouraging return to a semblance of normalcy after last week’s squall, until a wave of selling in the final hour, with 600 million shares of volume, pushed the major indexes solidly into negative territory. As of this writing, that barometer is still a bit wobbly. Australia was down 1.26% overnight and the Nikkei off .17%. But Chinese and the Singapore markets are up, as are European and the S&P and DJIA indices.

But some of the explanations are less persuasive than others. If you’d been paying even a little bit of attention the financial markets in 2012 and a chunk of 2013 were moving in lockstep, in a “risk on-risk off” pattern, with high yielding emerging markets as the preferred “risk on” trade. Hyun Song Shin of the San Francisco Fed took note of bond investor driven liquidity in a November 2013 presentation, stressing that the key theme was “search for yield” (in other words, a response to central bank negative real yields): 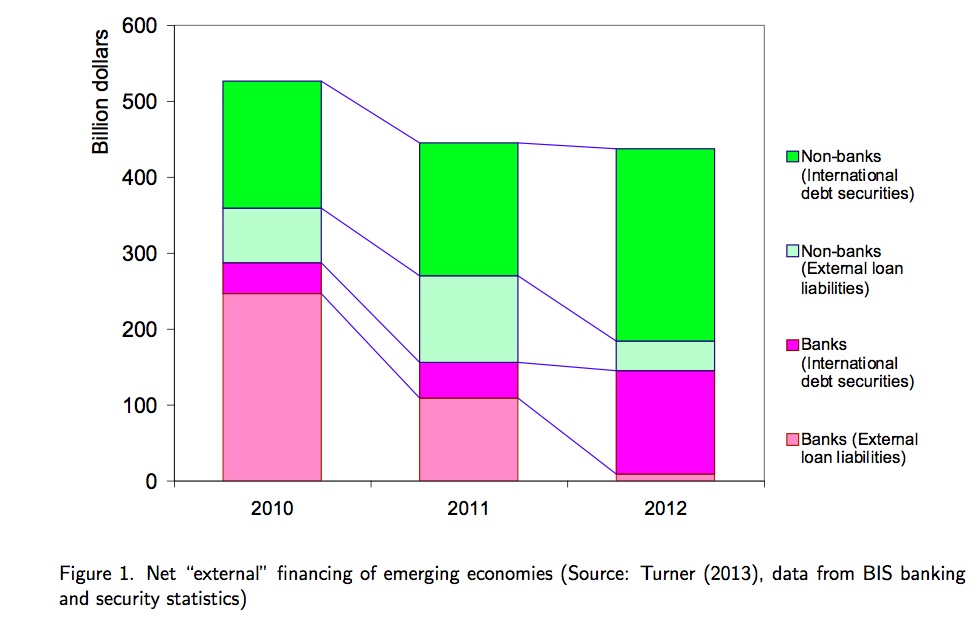 He anticipated more whackage to emerging markets, particularly since some had meaningful private sector borrowings in foreign currencies:

— have fallen in tandem with advanced economy bond yields

In various analyst comments on the crisis, there’s been a tendency to blame some, even most, of the emerging countries for “living beyond their means”. That must strike many officials in these economies as offensive, since the BRICs and some smaller countries complained to the Fed about the destabilizing effects of QE-driven hot money coming into their economies, as well as goosing commodity prices. The Fed ignored their pleas. As Paul Tucker, recently deputy governor of the Bank of England, pointed out in a speech last week (had tip RA):

Time and again policymakers have had to be reminded that gross capital flows matter as well as net flows. In the 1990s Asian crisis, the sectors under pressure varied according to who had borrowed short term in foreign currencies in external markets. In Thailand, it was the government; in Korea, the banks; but in Indonesia, the nonfinancial corporate sector. The rapid withdrawal of hot money triggered combined liquidity and exchange-rate-regime crises. In a nutshell, lessons included the importance of developing domestic capital markets, so that local savers and borrowers could meet without the currency transformation entailed by international- market intermediation; the virtues of floating exchange rates; and the importance of monitoring and managing national balance sheets. The latter was the central theme of one the key official sector reports to ministers (the ‘Draghi Committee Report’)5. Some EMEs took it to heart, accumulating fx reserves to build a “fortress balance sheet”, and thereby self-insuring against shocks rather than relying on external insurance from the IMF…

The trials of both the Asian EMEs in the 1990s and the EA more recently are examples of capital flight exacerbating a homegrown problem. But capital does not flee solely due to crisis in recipient countries. The problems might begin in the providing country(ies), with capital pulled back home to help sort out problems there or simply to reduce activity away from a lender’s core-franchise markets. This has been a potent channel of contagion during the recent crisis. An example would be Euro Area banks abruptly pulling out of trade finance in Southeast Asia in 2011/12. Thus, an excess of flighty liabilities can be a source of vulnerability even if domestic economic fundamentals are broadly sound.

Arguably most frustrating for recipients, the initial flight of capital needn’t be prompted by a crisis anywhere at all. It might simply be a ‘rotation’ of short-term capital from one set of opportunities to others elsewhere: game over, move on. That has come to the fore over the past few years as short-term capital first poured in to a number of EMEs — pushing up exchange rates and asset values, and loosening internal credit conditions; then withdrew; and most recently returned. EME financial conditions deteriorated abruptly in the middle of last year when it looked as though the Fed would begin to ‘taper’— ie slow the pace of expansion of — its monetary stimulus. Perversely, EMEs that had nurtured reasonably liquid domestic capital markets were amongst the worst hit, as entry had been easier; this fits with talk of ‘proxy hedging’ in broadly correlated, more liquid markets in earlier episodes.

In other words, the best students of the Washington Consensus got punished the most.

Even though the the Fed’s taper talk sent a shudder through emerging markets last year, at least as big a culprit has been slowing growth in China, since lower demand for commodities hits many smaller economies hard (for instance, falling soyabean and corn prices have hurt Argentina’s foreign exchange position, greatly increasing its vulnerability). We’ve been skeptics of the “soft landing” consensus, because China is trying to engineer a transition from an export/investment driven economy to a consumer oriented one, and no country has managed that transition smoothly. Even worse, China’s consumption share of GDP has generally been declining in recent years.

A comment at the Financial Times by Ruchir Sharma, Morgan Stanley’s head of emerging markets and global macro, argues that the Chinese credit boom is likely to come to a nasty end. Key bits of this important piece:

Recent studies have isolated the most reliable signal of a looming financial crisis and it is the “credit gap”, or the increase in private sector credit as a proportion of economic output over the most recent five-year period. In China, that gap has risen since 2008 by a stunning 71 percentage points, taking total debt to about 230 per cent of gross domestic product…

Looking back over the past 50 years and focusing on the most extreme credit booms – the top 0.5 per cent – turns up 33 cases, with a minimum credit gap of 42 percentage points.

Of these nations, 22 suffered a credit crisis in the subsequent five years and all suffered an economic slowdown. On average, the annual economic growth rate fell from 5.2 per cent to 1.8 per cent. Not one country got away without facing either a crisis or a major economic slowdown. Thailand, Malaysia, Chile, Zimbabwe and Latvia have had a gap higher than 60 points. All those binges ended in a severe credit crisis…

China has hit its ambitious growth targets so consistently that many analysts can no longer imagine a miss. The consensus forecast is for growth of 7.5 per cent this year, right on target. Growth is widely expected to continue at an average rate of 6-7 per cent for the next five years. It is hard to find a prominent economist who forecasts a significant slowdown, much less a credit crisis…

History foretells a different story. In the 33 cases in which countries built up extreme credit gaps, the pace of GDP growth more than halved subsequently. If China follows that path, its growth rate over the next five years would average between 4 per cent and 5 per cent.

The key to foretelling credit trouble is not the size but the pace of growth in debt, because during rapid credit booms more and more loans go to wasteful endeavours. That is China today…

Those who trust in China’s exceptionalism say it has special defences. It has a war chest of foreign exchange reserves and a current account surplus, reducing its dependence on foreign capital flows. Its banks are supported by large domestic savings, and enjoy low loan-to-deposit ratios…

These defences have failed before. Taiwan suffered a banking crisis in 1995, despite having foreign exchange reserves that totalled 45 per cent of GDP, a slightly higher level than China has today. Taiwan’s banks also enjoyed low loan-to-deposit ratios, but that did not avert a credit crunch. Banking crises also hit Japan in the 1970s and Malaysia in the 1990s, even though these countries had savings rates of about 40 per cent of GDP.

And notice the message sent by the US markets. The S&P, which has the heaviest exposure to banks, has been the most sensitive to the EM tremors. Remember that Lehman, which had a large emerging markets desk, nearly went bust in the 1997 Asian markets crisis. Our big banks now look better diversified, but if a large bank wrong-footed enough trades, it could take a meaningful hit to its balance sheet. And more weakly capitalized Eurobanks are less able to sustain this sort of blow well. So while the emerging markets wobbles may not evolve into a full-blown crisis, it’s likely we’ll have a sustained period of rockiness before conditions stabilize, and with deflationary pressures on, they could well resolve at markedly lower prices for risk assets than we see now.