Yves here. Note that the reader totals that Lambert uses below understate our total readers considerably. The data he was used excludes RSS and email subscribers, which are roughly half our daily readers.

Since Yves is so shy and retiring, and also trapped in an aluminum tube thousands of feet in the air, hopefully far away from any crying babies, it falls to me to write the Naked Capitalism “Top 10” post for 2013. I sliced the data two ways: Top Ten by unique views, and (thanks to a little SQL wrangling by admin Keith) Top Ten by comment count. These two rankings give a smidge of quantitative insight into the sort of material that you, readers, value (though to do a real McKinsey-style, Yves-style report would take a lot more work). MR SUBLIMINAL Garçon, more champagne!

Now, Table 1 is just a little deceptive; I wanted to get a sense of the subject matter for high-ranking posts, and so I removed the daily Links post from the series. If I had included them, the bottom 5 would have been Links. And the bottom 10, 20, 30…. In fact, to collect the top ten non-Links posts, I had to go 278 posts down the 2013 rankings. To me, that testifies to the strength of the NC Links franchise (“I’d just like to say that I love this blog and I think you have the best Links section in all of the internets”. Thanks to the readers who suggest links!) Here’s a chart of those 278 which supports that idea: 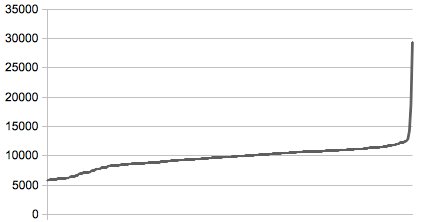 Like so much else on the internet, NC posts follow a power curve. But the “shoulder” of the curve, descending from the first five posts is very steep, and the “long tail” flattens out a high level, which suggests, basically, the NC readers view all posts: Links, posts, and cross-posts. They approach NC systematically, rather than taking little nibble here and there.

For Table 2, I did not have to filter out Links; no Links posts occurred in the top ten posts by comment. If we take comment count as a proxy for controversy, that suggests that Links generate less controversy than posts, which should come as no surprise, since posts generally express a thesis which readers will wish to support or oppose or critique. (Links, of course, often express multiple theses, but generally only implicitly.)

Top Ten by Views and Top Ten by Comments have the following posts in common:

The subject matter of the first post concerns what, er, Marx would call the “social relations of production” and why workers are alienated from those relations; because they’re bullshit, indeed, but not perhaps for the reason the (cross-posted) author proposes. (Readers will naturally feel free to relitigate their comments on these posts.) The last three posts are what I call “zeitgeist” posts; they attempt to capture or presage “the spirit of the age,” much as an animal may call an earthquake early by acting restlessly, or howling. Since both the Internet readership and the NC commentariat rank these posts high, we might regard them as expressing what “everybody knows.” Cue Leonard Cohen:

Now let’s look at the differences between the two Top Ten lists by classifying them according to their subject matter in addition to Zeitgeist; let’s use the categories in the new motto — Finance, Economics, Politics, and Power. Herewith:

There is probably much more to be gleaned from quantitative study of NC readership statistics, but this will have to do for now. Readers, thoughts? Posts that you’re amazed didn’t make the Top Ten? Alternative metrics?